Around the Coyote bites the dust

Around the Coyote has exhibited artists for longer than most current SAIC undergraduates have been alive. That is, up until this past winter, when their much-needed fundraiser only raked in $2,000.

Chicago arts institution is forced to close its doors 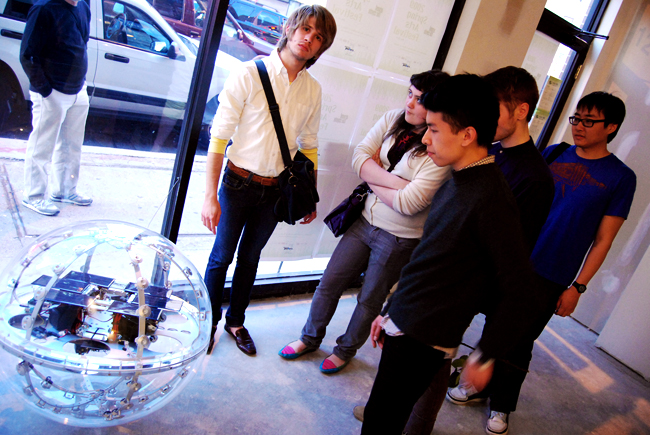 Sugar, exhibition at Spring Around the Coyote Festival. Image courtesy of Patrick Cunningham

Founded in Wicker Park in 1989, Around the Coyote exhibited local, international, and emerging artists for longer than most current SAIC undergraduates have been alive. That is, up until this past winter, when their much-needed fundraiser only raked in $2,000. This was the final straw for unpaid Executive Director Allison Stites, who decided that Around the Coyote could no longer operate on its own hind legs.

It was time for the art festival that once characterized Wicker Park and the budding Chicago arts community to find a new home for its programming.

Held on December 19, the Winter 2009 fundraiser cost only $30 to attend, and offered an open bar, dinner, and new installations by 28 artists. Invitations and advertisements piteously declared, “Save Around the Coyote from the brink of extinction! We won’t make it through the winter without your help.” But when attendance was nonetheless disappointingly low, Stites, who had once served as Development Director but had been volunteering her own time to serve as Executive Director for the past year, saw no reason to continue struggling. ATC had obviously lost its support in the Chicago community.

Sure, resources diminish quickly in a bad economy, and art buyers aren’t necessarily willing to throw down the money they might have a few years ago; but still, why did ATC fade into the abyss of failed arts organizations while Chicago art fairs like Artropolis grow bigger every year? Stites credits the failure partly to the recession and her step down from a paid leadership position, which caused a decrease in ATC’s grant writing, sponsorship, and donations.

“Since 2005, I have thought about basically every possible way the festival could continue in a stable way,” said Stites via email with F Newsmagazine. “Our festival was largely dependent on the donations of venues from local property owners and the donations of walls, lighting and labor from a major donor. That support was always uncertain year-to-year based on the amount and type of available space, how early we could get the property owners to commit. Always a Herculean effort was required to get enough secured space in enough time to properly promote the event; and if we would have to pay for all the walls, lighting and labor [for] it would be donated.” 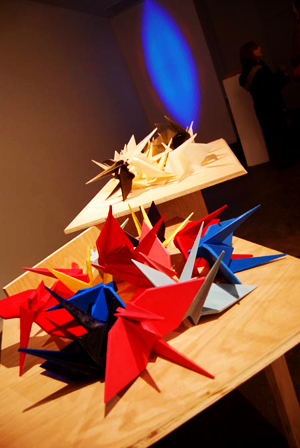 Installation views of The Ease of Oak exhibition at the Fall Around the Coyote Festival. Image courtesy of Patrick Cunningham

Economic factors aren’t the only problems Around the Coyote has had to contend with; the organization has also struggled with a less than stellar reputation in Chicago’s art community. Catherine Forster, director of Chicago-based new media outlet LiveBox, met Stites in 2005, when she was invited to curate a new media component of Around the Coyote.

Forster turned down the offer at first because she had been advised as an SAIC student not to get involved with the festival, which had a reputation for accepting all submissions and including work of questionable quality. Ironically, the work Forster showed at Around the Coyote back in 1996 drew the attention of an SAIC faculty member who encouraged her to enroll in SAIC for her MFA, which she received in 2002.

Forster accepted the offer after realizing that Stites’ vision for the festival had shifted. ATC was no longer the neighborhood-centric, anything-goes festival that Forster remembered from the 1990s, where studios, galleries, lofts, and even churches, were taken over by artists and visited by thousands of people during the course of the weekend. “All kinds of things were happening in the streets, and the quality was really questionable,” said Forster about the festival before artists like herself were invited to curate and select the work, charge fees to have a booth, and thus transform the event into a more rigorous, quality-oriented arts organization.

Forster signed on to expand and curate the media arts exhibition in 2007 and has curated a media space every year since she and Stites decided that the film, video, and new media work she curated would not be solely dependent on submissions to the festival, and that the work would not just be local, but international as well. But even with its careful selection of work, ATC struggled to find its audience amid frequent location changes — everywhere from galleries in Wicker Park to lumber yards in the West Loop.

“I think one of the problems was that [ATC] hadn’t really convinced the broader art community that they had moved up in quality and [that] they were becoming something much more interesting and edgy,” said Forster, who claims that the festival had upset their old audience of local artists in Wicker Park by way of exclusion, but hadn’t been embraced by a new audience elsewhere. “There was just no place for them anymore,” Forster said.

“It seems, usually, people either loved what we did or hated what we did,” said Stites via email. “With each executive director over the past 20 years there have been different aesthetics, different programming goals and different ways of executing the programming.”

“My focus since 2005 was on professionalizing the exhibits; gaining access to established galleries, art patrons and curators for the artists in our festivals and gallery exhibitions; and raising the quality of the art we showed in hopes of showing what a serious independent and alternative art scene there is in Chicago.
“With the amount of resources we had, and a real amount of baggage and misperceptions to overcome about who we were, I feel I was able to do that a little bit better each year, and I’m proud of what ATC has offered while I’ve been there.”

Around the time ATC was “professionalizing” its image, SAIC students like Patrick Cunningham, a 2nd year Art and Technology graduate student, saw opportunities to gain experience curating at a festival that had made a name for itself with in the city. “Around the Coyote gave young artists the chance to get accustomed to professionally show their work; install and prepare and do that sort of stuff. It’s sometimes more difficult to gain that experience right out of school or even in school,” said Cunningham, who began curating pop-up art shows in vacant retail spaces for Around the Coyote in 2009.
“I think for many organizations, if not all, there is a natural life span,” said Stiles. “My hope is that with Around the Coyote closing, the baggage we carried is shed, and there is room for other organizations to step in to continue the best of what we did — and to do it hopefully better. I hope people can build on what we built and I’m doing my best to make sure the lessons we learned aren’t lost.” Stites is donating ATC’s old equipment such as computers, lighting, and office furniture, to small, non-profit Chicago arts organizations in need.

Around the Coyote’s programming will be redistributed around the city as well, such as the free children’s art education program, which will continue through the Chicago Park District. Some of ATC’s gallery exhibitions will be transferred to other local galleries, and Stites will shift her energy to curating a pop-up gallery program throughout Wicker Park and Bucktown, which she hopes will fill some of the void left by ATC. Perhaps most notably, Stites, in addition to dozens of displaced ATC participants like Forster and Cunningham, will continue to curate independently for other Chicago galleries and organizations, the majority of which will exhibit emerging artists. 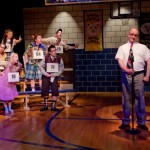 From Dance to Fashion

2 Responses to Around the Coyote bites the dust