Ahhhh, the season of the culture-specific film festival has arrived once again. On April 16th, the Palestine Film Festival kicked off at the Siskel with “Zindeeq,” a convoluted, dreamlike tale starring the indomitably sexy Mohammad Bakri. 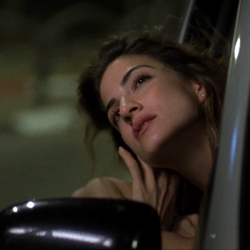 Ahhhh, the season of the culture-specific film festival has arrived once again. Last month we had the European Film Festival at the Gene Siskel (see F’s thoughts on the festival here), quickly followed by the Asian-American Showcase; and on Friday (April 16th), the Siskel debuted the 9th annual Palestine Film Festival, the same night that the Latino Cultural Center launched the Latino Film Festival around the city (we’ll be reviewing films from both festivals over the next two weeks, keep checking back for more).

Any cultural event that purports to be ethnicity-specific is potentially cringe-worthy, and I must admit a certain wariness when I went to the opening of the Palestine Film Festival on Friday. I am hardly in any emotional state to watch recapitulations of devastating documentaries like “Gaza Strip” for the next two weeks; and while a few films (“Checkpoint Rock,” “City of Borders”) promised to shed light on lesser known aspects of life in occupied Palestine, a cursory glance at the program seemed to promise a lot of heavy-handed politics.

Fortunately, I was wrong. The festival organizers cleverly decided to launch this extravaganza with “Zindeeq,” a 2009 film (directed by Belgium-based, Palestinian director Michel Khleifi, of “Wedding in Galilee” fame) that stars the indomitably sexy Mohamad Bakri. 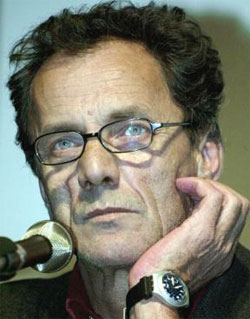 Bakri’s presence alone can justify spending 85 minutes sitting inside a dark theatre even though spring has finally arrived, and he certainly did not disappoint.

“Zindeeq” is a dream-like (or, at times, nightmarish), convoluted tale of M, a Palestinian filmmaker from Nazareth who lives abroad, but returned home to film interviews for a documentary of the Naqba, or expulsion of Palestinians in 1948.

When his extended family becomes embroiled in a somewhat mysterious, violent web of retribution, M is essentially made homeless in his own home town, fruitlessly searching for a place to sleep in a city that feels like the brainchild of Kafka, Borges and Burgess.

Wandering, homelessness and estrangement (from a place, from a family, from one’s own memories) are the linchpins of this hauntingly poetic, meandering narrative, which wisely focuses on an individual’s experience of the trauma of rootlesness as opposed to cramming a lot of activist rhetoric down the viewer’s throat (or eyes, as it were. Though that would hardly make sense).

Particularly effective is Khleifi’s mise en abime technique whereby the viewer watches M as he watches the footage he recorded on his video camera (the camera that he uses to distance himself from his surroundings, and that marks him as a foreigner in the eyes of the Nazarenes); footage of the elderly remembering the events of 1948 that M fast forwards and rewinds, an eloquent metaphor for the complex distortions, expansions and degradations of memory itself.

My one critique of “Zindeeq” is the banal instrumentalization of the women characters; sure, Bakri is sort of like the Benicio del Torro of the Arab-speaking world and, as such, perhaps it is inevitable that he cavorts with beautiful young women from time to time.

But rather obvious metaphors of woman-as-homeland, woman-as-life giving force, are meritorious of some sarcastic eye rolling. Despite that hiccup, though, “Zindeeq” remains a fantastic film and a beautiful way to start the festival.