What happens when both the art and the audience start to infiltrate private homes that aren’t designated as galleries — homes that still maintain the intimacy of the owners’ furniture and family photos on opening night? 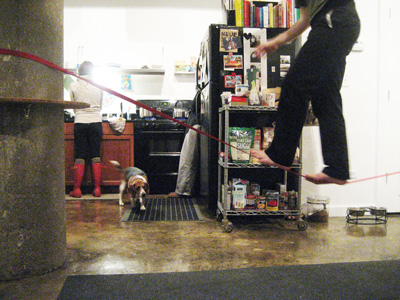 Chicago is famous for its apartment galleries. Young students, curators and art lovers alike shove their couches to the side at least one Friday night per month, and allow strangers into their homes to drink alcohol and look at art.

But, what happens when both the art and the audience start to infiltrate private homes that aren’t designated as galleries — homes that still maintain the intimacy of the owners’ furniture and family photos on opening night?

SAIC grad student Tang Zehui intends to find out. “Artists and Residents” is a series of site-specific exhibitions in the homes of private individuals curated by Tang (MA in Arts Administration and Policy 2010) as a response to Chicago’s prolific DIY apartment gallery scene.

In an interview with F Newsmagazine, Tang (who recently moved to Chicago from Beijing, where she worked for the Chinese National Art Museum in 2008), mentioned that what she finds most striking about Chicago’s apartment galleries is the way these spaces imitate the formal white-cube environments of traditional exhibition spaces.

“Artists and Residents,” on the other hand, proposes to do something completely different. The series relishes the opportunity to inject lived-in spaces with art, leaving the furniture and wallpaper in its place.

A prime example is Madeleine Bailey’s “Hiding Spaces,” (the fourth of five events in the series, the fifth of which is forthcoming), which was installed in a Hyde Park mansion owned by Jay Dandy and Melissa Weber. The home was packed with Wesselmans and Warhols, the cutest cat this reviewer has ever seen, a collection of fabulous vintage clocks, at least five kids under the age of ten, and a taxidermied dancing polar bear. 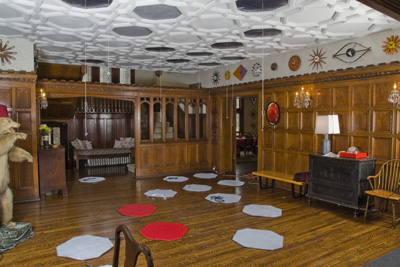 Bailey’s three-part installation is staged on three floors of the expansive mansion, and responds to the site-specific architecture and art collection in its form and its simple red, black and white palette.

In the first floor foyer Bailey has created several black and white sewn vinyl tiles, mimicking the ceiling tiles, which are scattered across the floor; long strings extend from the ceiling, marking the paths that the tiles would have taken had they fallen. Some floor tiles are red and misshapen, asking the viewer to take notice of the difference.

On the second and third floors, semi-transparent red vinyl circles are laid on the wooden floor, subtle markers that the viewer has entered a different realm. On the second floor, a large-scale, tactile, white painting composed of zippers and layered paint mimics the dated white wallpaper.

Finally, on the third floor landing is “Hiding Place for Two” — two black eye-masks lined in red fabric, connected to grounded cement blocks with wire extensions. The piece had every guest giddy with excitement, as visitors who put on the masks repeatedly realized that when hiding here the only person who can’t see you is, in fact, yourself — and whoever else is hiding with you.

When she initially conceived the format for “Artists and Residents,” Tang planned to seek sites and hosts for the exhibitions via Craigslist to ensure that the locations would be absolutely random.
However, after receiving advice from SAIC Instructor Kate Dumbleton and fellow classmates in her Fall 2009 Project Lab course, Tang decided that reaching out through her own connections to find appropriate sites would be a more manageable plan.

The result is a series of five homes and sets of hosts that the curator knows only tangentially. These sites paint a diverse picture of Chicago’s art community — wealthy collectors; members of the Art Institute’s Board of Directors; a pair of young artists; a group of 20-something restaurant servers; and several members of the same church living in a co-op on Chicago’s South Side. Tang said, “This group of people really reflects the people that I know in Chicago. Because I’m here for art school, all of them are predisposed to a certain interest in art.”

Each host was paired with an artist or group of artists chosen by Tang. Following the initial match and meeting, the artists and the hosts were left on their own to develop and determine the nature of the installation. The outcome was an intimate collaboration between artists and art lovers, cleverly facilitated by Tang. This process lead to a series of inventive and deeply personal installations, such as Mike and Alan Fleming’s performance and installation, “Feng Shui,” in a Garfield Park loft (February 28 – March 28).

The Fleming twins generally perform in public or institutional spaces. Their work relies on the contrast between the highly controlled architecture of city streets and public buildings, and their unique connection and ability to communicate with one another, as well as with their audience. Brittany and Eli, the hosts of “Feng Shui,” described their interaction with the Flemings as a productive one.

Both Brittany and Eli are artists themselves, and while the exhibition was not a collaboration between the roommates and the Flemings, both residents were excited about the project. They described with pleasure the intimate experience of going about their lives and inhabiting their space as usual, but at the same time witnessing a body of work being created, and the private knowledge of all the possible iterations of the project that were not presented as part of the exhibition.

All of the hosts engaged in the project reported a similar experience — the real reward for opening their homes was having a unique opportunity to witness the creative process and feel like participants in the creation of new work.

This sense of intimacy — of being included in a private process — is ultimately the experience of those who have attended the openings of these exhibitions as well. Gathering together, drinking wine on some stranger’s couch with a group of people from a familiar social circle and a group of unknown participants, is a cozy experience.

Tang’s careful pairing of artists and residents has resulted in a series of strong exhibitions. Were these pairings not so well organized, it would be easy for the work to get lost in the excitement of exploring other people’s homes.

Instead, at the events this reviewer has attended, the conversations center on the work, and the art facilitates an enjoyable and unique social event. “Artist and Residents” is an evolving, conversational, series of meetings between space and work, artist and host, guest and guest. 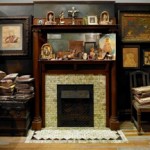 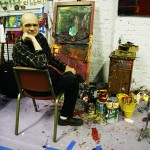