By the outburst of applause following each look, it was obvious that Lara’s collection was a hit. And as the designer emerged from the curtains after the models’ final walk, it was clear she felt so, too.

Chicago’s 312 Fashion Runway Series opened and closed this weekend with an exciting sequence of runway shows, headlined by Lara Miller and featuring Horacio Nieto and a night of designer vignettes – all showcased at Loft on Lake in the West Loop. I was fortunate enough to attend the Lara Miller show with my friend Brandon, from e-boutique twentythirtyforty.net, which was an extravagant affair of shopping, fashion, and an amazing runway show.  While sipping on cocktails provided by Casa Noble and Fuze, guests could shop Lara’s designs in an atmosphere alive with conversation and networking, all to the tune of a fabulous, pulsating soundtrack.

Once the runway presentation began at 8:30pm, the crowd was fully energized and ready to see Lara’s collection. As the models emerged – styled with huge, teased hair, sky-high wooden clogs with rounded heels, and pastel calf-high socks – they showcased an amazing array of beautifully constructed knitwear. Look after look, after reaching the end of the runway, the models would tug on a string, or re-drape their outfit to create an entirely new outfit. Long dresses transformed short cocktail-length numbers, slouchy sweaters became shrugs, wraps became cloaks – not only does Lara Miller use eco-friendly materials, but each look was a stylish, effortless two-for-one!

By the outburst of applause following each look, it was obvious that Lara’s collection was a hit. And as the designer emerged from the curtains after the models’ final walk, it was clear she felt so, too. After the show, Brandon and I went up to talk to the glowing designer, chatting about how much we loved the collection, and how we couldn’t stop “twit pic-ing” everything. She was so lovely and gracious and completely humble, despite the amazing show she had just produced. There’s lots to come from Lara Miller – having just shown at New York City’s Green Fashion Week, she is well on her way to much due success. All in all, it was an amazing evening, and I’m excited to be able to say: “I saw her when…” 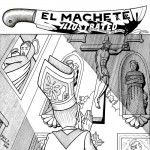