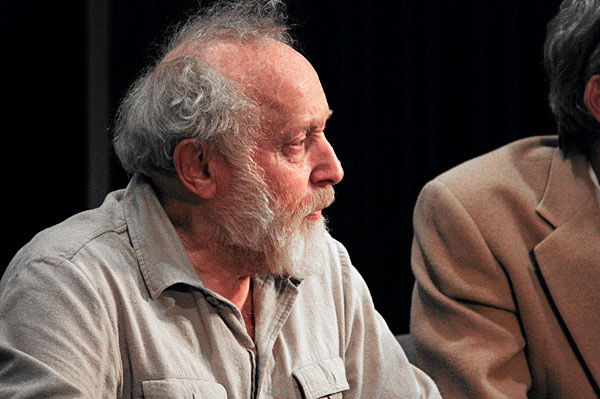 Yuri Norstein, a celebrated animation master from Moscow, examines master paintings with a magnifying glass when visiting museums. Literally. “Enlargement,” he explained at Depaul’s CDM Digital Cinema Theatre in downtown Chicago on February 1. “When you blow it up, you see the hidden drama … the paintings that even perhaps the painter didn’t realize.”

The evening’s discussion, followed by an audience question and answer session, was lead by DePaul Assistant Professor of Animation Joshua Jones. Andrew Wachtel, Dean of the Graduate School at Northwestern University, served as Norstein’s translator.

Norstein (also credited in films as Yuriy or Yu. Norshteyn) began by presenting his award winning animations “Hedgehog in the Fog” (1975) and “The Tale of Tales” (1979); an excerpt from the documentary “Islands: Franscesca Yarbusova”; and an excerpt from his film “The Overcoat,” an adaptation of Nikolai Gogol’s novel by the same name which has been in production since 1981 but is only thirty percent completed. 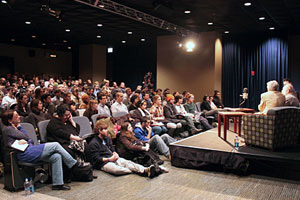 Norstein blends influences as diverse as Russian folklore and European avant-garde of the early 20th century. His work is remarkable for the sophistication of his characters’ expressions, and for his treatment of space. His unrelenting perfectionism has earned him the nickname “The Golden Snail.”

Continuing to shoot exclusively in film, Norstein uses an animation stand that stands 12 feet high and uses multiple plates of glass to give his work its rich spatial qualities. The plates are stacked on different levels, and different objects, characters and drawings are placed on the different plates. This multi-planar system is similar to what Disney used to achieve a more sophisticated depth of field in such films as “Pinocchio” (1940) and “Bambi” (1942) — which Norstein claims to have watched “one frame at a time.”

Norstein’s particular setup is unique in that his plates can be moved up and down a meter and a half (roughly 5 ft.). In an effort to explain this process, he said that it was like “taking a Rembrandt painting, doing a core sample, and separating the different levels. It’s like geological strata of the earth. What I tell students is ‘imagine what you see flat as a landscape spread out and you’ll get the idea.'”

Norstein is highly attentive to every area of production. “Light is a very important actor within the films,” he emphasized. “One can say the same about the sound and music. You should never say ‘I’ve done my job, you go do yours.’ The director’s job is making harmony out of all of these things.”

He maintains this approach with everyone he works with — including his wife Francesca, who designs and constructs the puppets that he animates. “Since the entire film has to be harmonic, I work rather tyrannically with [her]. Her work has to be subordinate to my vision,” he said. 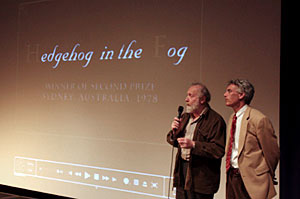 He also insists on extensive storyboarding: “I tell my students it’s all in the storyboard. That’s what I torture them with.” He also encouraged young artists to pursue their passions along with the hard work. “Don’t fall for things that will make you a lot of money,” he said. “Don’t feel like you’ve wasted your life.”

Norstein believes that when you’re making a movie, “you have to be convinced of the righteousness of your cause in terms of every element of the film.” He claims to have received letters from government officials persuading him to edit his film “A Tale of Tales,” yet “behaved in a very aggressive manner towards these official letters, and refused to change things.”

However, Norstein also contested that “there’s a little bit of exaggeration about the level of censorship in the Soviet Union,” claiming that censorship is an issue all over the world, “even in Hollywood.” Russia is home to “many movie directors,” Norstein said. “Freedom came, and I haven’t seen great results from them.”

Most recently, Norstein has written a massive book about animation, which includes approximately 1,800 pictures. He says it’s a “book, not just about techniques, but animation in broader cultural contexts.” The book, “Snow in the Grass,” is currently available in Russia but not in the United States.

In speaking on his own work Norstein said “each film represents a new level of my understanding of what an animated film can do.” Though it is disappointing that budgetary constraints and his own obsessiveness have stalled the completion of “The Overcoat,” it is dazzling to see this undeniable growth throughout his body of work.

For more on Yuri Norstein visit www.imdb.com/name/nm0635956/ and
www.russia-ic.com/people/culture_art/n/213/

Out from the Shadows 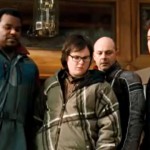