If God exists, let’s hope he has a lame sense of humor. 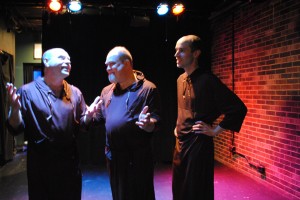 This is the kind of play SAIC students should be going to see, particularly the writing students and the performance artists. Not because it’s good, but because it’s a testament to what you can do in a small space with few actors, virtually no props, and limited costuming.
The show is sort of double header, with The Short Stack (Three short plays written by Reina Hardy) starting the show.

The Short Stack reminds me of something the late comic Mitch Hedberg once said. “You’ve got to start the show strong and end strong. It can’t be like pancakes: exciting at first, but by the end you’re fuckin’ sick of em.”

Playwright Marc Heiden is an alum of UIC, where he wrote the script for Monks in Trouble.

To summarize the plot briefly, a group of Monks flip out when objects in their monastery begin to mysteriously disappear. I will compare the three characters in the photograph below to three of the Seven Dwarves. Stephen (played by Dan Cooney) is the head of the monastery, kind of like Doc. Jackson (played by actor Ken Craig) is the cynical worldly failed-entrepreneur turned monk, kind of like Grumpy. Percy (played by Eric Cartier) is somewhere between Dopey and Jesus Christ. Although humble and kind of bumbling, he might be the son of God.

When you go to a cheap Chinese buffet, you’re only disappointed if you expect something other then what the buffet is capable of providing you with: bad Chinese food.

By that token, Monks in Trouble is precisely what you could expect to see in a theater underneath train tracks with a seating capacity of 50.

An Utterance for Haiti