Natalie Edwards interviews Grant Reynolds, an F Newsmagazine cartoonist who has since published several books, including the acclaimed “Comic Diorama”.

Grant Reynolds was an F Newsmagazine cartoonist and has published several books since then. Most of his books, including the acclaimed “Comic Diorama”, a one-man anthology, are available at Quimby’s and online at quimbys.com. You can also keep up with his weekly sketches at Tour Journal, his weekly sketchbook blog. 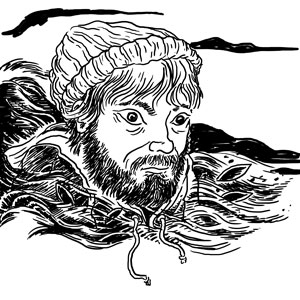 Self portrait by Grant Reynolds

NATALIE EDWARDS: Who is/was (are/were) the most overrated cartoonist(s) and why?

GRANT REYNOLDS: Um, I don’t wanna get myself in trouble here, so I’m gonna refrain from answering.

NE: Which cartoonist(s) have been historically under-appreciated for their contribution?

GR: Well, I can definitely tell you about a few working comic artists who I think people should really check out. Anya Davidson, Becca Taylor and Jeremy Tinder, all three SAIC alums, are still living here in Chicago and making fantastic work.
Anya Davidson is an extremely prolific artist/musician who is fairly new to drawing comics. She’s been rolling out book after book over the last couple years, all with beautifully screen printed covers, which she often collaborates on with fellow SAIC ‘Print Rat’/bandmate Carrie Vinarsky. Emerging from somewhere in between Goya and C.F. (comic artist Chris Forgues), her pages crackle with an energy and an urgency to keep moving, keep making, as there seems to be no slowing down the flow of ideas. She has a story in “The Shortpants Observer” anthology, and fortunately for us PictureBox Inc. has started to distribute this traditionally D.I.Y. artist, and several of her new books can be ordered from them online, including the 17.5 x 21 in, beast Consciousness 3 Volume 1.
Becca Taylor is always drawing in her sketchbook, always writing down something you said, always paying attention to the details. She has mastered the art of observation and is going to leave us all a beautifully illustrated document of ourselves. For several years she self-published the series “The Wonderful Year”, which culled up images and quotations from her sketchbooks and weaved them together into narrative gestures, revealing the familiar and intimate environment of our everyday lives. Now she has a substantial book in the works and some comics published in anthologies (“Papercutter”, “The Shortpants Observer”), which people should definitely check out.
Jeremy Tinder is like a psychic medium for amazing ideas that want to be drawn into comics or made into paintings. In 2005 Top Shelf published his book “Cry Yourself to Sleep,” followed by the short collection “Black Ghost Apple Factory.” His output is constant and in recent years he’s created a large body of indelible work. Some of these comics have been featured in anthologies (“The Shortpants Observer,” “Papercutter,” “Popgun”), while others will soon surface in his forthcoming collection Time and Space. Then, of course, there’s his epic book-in-progress, “Devourer of Men,” which is rife with his richly colorful paintings and displays his clear understanding of how to tell a good story.

NE: What do you hope to accomplish as a cartoonist/artist?

GR: Right now my focus is on trying to work on a longer single-story book. I guess I’m a pretty prolific artist, because I’m always making something and putting it out, but most of my past work has consisted of shorter stories, which have been scattered throughout mini-comics, anthologies and magazines. This has kind of left me with the feeling of having
created a lot of work, but not having much to show for it because it’s so spread out. Maybe I’ll eventually collect some of it together, but until then I want to slow down my output in order to concentrate on one thing.

NE: What’s your response to the death of alternative weeklies, cartoonists’ traditional venue? Where are they all going to exhibit their work now?

GR: I don’t really believe in the death of things, at least as far as art is concerned. It’s easy for people to say, “Oh, that’s it, pack it in, there’s nothing more to see here, folks,” but I think that’s because it’s often hard to see the larger scope of where things are going and because we don’t want things to change. So as one venue wanes others will begin to reveal themselves. There’s always something a’bubblin’ up from the underground, and more often than not that’s where the really good stuff is anyway. I mean, look at some of these D.I.Y. newsprint anthologies that have been cropping up, many of which are entirely comics-based. “Paper Rodeo” has been around for forever, but now there’s “Kuti Kuti” out of Finland, “Smoke
Signal” in Brooklyn, and even “The Skeleton News,” which was here in Chicago. I see a really exciting future in that and I fully intend to participate. jam-comics group Trubble Club, which nearly everyone that I’ve mentioned in this interview is a part of including myself, is putting out a full-color Sunday strip style newsprint issue in the coming months. I mean, there’s no money to be made doing these things, but anyone who makes comics long enough soon comes to terms with the fact that they’re going to be poor. I don’t think most comic artists are doing it for the money anyway. And if things continue to get more bleak then I guess there’s always the internet (le sigh).

NE: How do you separate your commercial/illustration work from your personal work/art comics?

GR: Well, I think what separates those two things the most is the fact that my commercial work is solicited by someone else who usually has an idea of what they want from me, so there’s a
collaborative element to those projects. With my own work I can do whatever I feel like doing, because it’s just me. I’ve learned over the years though that I don’t like doing commercial work all that much, partly because of that lack of total control, but also because I usually get bored, so I try to stick to doing album artwork for my friend’s bands. Recently I created an Etsy account for three-word commissions, which has been pretty fun. Basically, people can send me three words via email and I create a 5 x 8 in. drawing based off their submission. But long-term collaboration has always been tough for me. I was working on a sci-fi comic called Singularity with Al Burian awhile ago, where he would give me these scripts he’d written for each episode and I would draw them. The whole thing was really fun and interesting to do, and it turned into something neither of us would have normally created on our own, but eventually I realized that I didn’t have enough time to do both Singularity and my own comics, and I felt like I was neglecting a huge part of myself. It was a difficult decision to make, because I didn’t want to quit working on it and I didn’t want to disappoint my friend, but eventually it seemed like the right thing for me to do. Unfortunately, now we just have this comic book fragment that we both put all this work into, but no way of publishing it. Maybe someday we’ll revisit it, who knows. 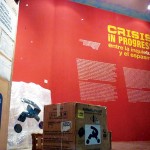