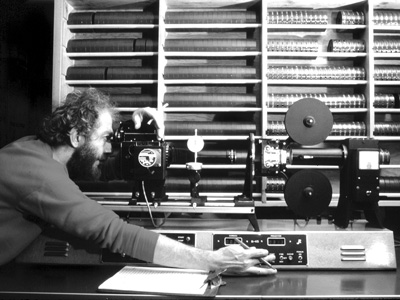 The multi-venue retrospective of Hollis Frampton coming to Chicago offers a chance to take another look at a body of work too often reduced to a couple of films. Frampton is known mainly for his lapidary works “Zorns Lemma” and “(nostalgia).” The first is a dizzyingly dense meditation on the process of aging and the relationship between language and experience. The second appears to be a charming remembrance of a photographer’s youth, but through a sleight of hand on the soundtrack turns into a maddening brainteaser that challenges the viewer’s own ability to remember. The two films are Frampton’s most approachable, and also his two works that most readily fit into the critical histories of avant-garde film. Yet, they are by no means his only works, and perhaps not even his best.

Frampton began his artistic life as a poet, but by his own account was not a very good one. After flirting with painting, he turned to photography. His early photographs were often imitations of and elaborations upon the still life work of Edward Weston. His films got him tagged by P. Adams Sitney, as a “structural filmmaker”—that is, a filmmaker whose work moved away from the lyrical abstraction of people like Stan Brakhage, and towards a more minimalist aesthetic that drew attention to the internal logic and formal properties of the work; the materiality of the film strip; the extreme formal possibilities of editing; and the experience of a film’s duration.

While Sitney never limits his own readings of Frampton’s work to the structural guidelines he laid out, his labeling has nonetheless limited subsequent readings of Frampton’s films by others, and is perhaps partly responsible for the lack of interest in Frampton’s early and later periods, both of which will be showcased in the upcoming screenings in Chicago.

In addition to being a filmmaker, Frampton was also a very singular writer. The very definition of a polymath, he was also an arch-ironist, and his playful criticism manages to be both recondite and good-naturedly humorous. Frampton shed a lucid light on his subjects, while at the same time pushing art criticism into the realm of Borgesian play and speculative fiction. One essay narrates a series of photographs from the point of view of the photographic apparatus itself. Another imagines a group of early photographs emerging from the lost continent of Atlantis.

In one essay Frampton defines the term “x” as “suffering” and attempts to write equations that express the account of suffering by various writers. Gertrude Stein is “x=x,” while Rudyard Kipling is “x=c-b/a.” Frampton notes, though, that Stein could also be expressed as “x-x=0,” that is, “anything diminished by something of its own magnitude amounts to nothing.”

Before his premature death in 1984, Frampton was working on a series of films called “Magellan.” The plan was to have a cycle of shorts (approximately 1000) that would play on every day of the year (or, more precisely, within a 365-day cycle), and would chart, metaphorically and symbolically, the journey of the explorer Ferdinand Magellan. Rarely screened, the completed sections the “Magellan” cycle will be the focus of the Chicago retrospective. “SOLARIUMAGELANI,” a program of three of the longer films from the cycle, played at Conversations at the Edge on October 15. Upcoming is a program entitled “Birth of Magellan” at Chicago Filmmakers on December 12; and “Fragments from Magellan” at Doc Films at the University of Chicago on January 23.

From a curatorial perspective, the most interesting series in the program is “Frampton and Friends,” playing at Block Cinema on November 13. The show groups together a series of Frampton’s early films, and one later one, based not on their formal properties, but on the fact that all of them deal in some way with issues of collaboration and friendship. “Manual of Arms” and “Artificial Light” are both portraits of Frampton’s friends; while “A and B in Ontario” is a collaboration with fellow filmmaker Joyce Wieland. Similarly, “Snowblind” enters into a dialog with Wieland’s ex-husband and Frampton’s close friend Michael Snow, who is also featured prominently in “(nostalgia).”

Both “SOLARIUMAGELANI” and “Frampton and Friends” were organized by, and will be introduced by, SAIC professor Bruce Jenkins. I talked with Jenkins about Frampton’s life and legacy, and why there’s renewed interest in his work (in addition to the forthcoming Chicago screenings, Anthology Film Archives recently restored his crypto-autobiographical series “Hapax Legomena,” which will screen at Doc Films on January 22, and MIT Press recently released a book of his critical writings, “On the Camera Arts and Consecutive Matters,” edited by Bruce Jenkins.

Jenkins said that for a long time there was so little writing about Frampton that “notes people had scribbled on the back of napkins became canonical texts that would appear in catalogs.” Because he worked in film in an era when the art-world had only a tentative relationship to the medium, “Frampton felt the sting of being a sort of second-class citizen.” And while his middle period of work gathered some acclaim, when he began work on “Magellan,” “even those close to him were left lukewarm by what they saw.”

Some of Frampton’s frustration can be felt in a letter he wrote to Donald Richie, who proposed to Frampton an uncompensated retrospective of his work at MoMA. After needling Richie about his inability to work without money, Frampton jumps on the suggestion that he come to New York for a Q&A.

“Are you suggesting that I drive down? The distance is well over four hundred miles, and March weather upstate is uncertain. Shall I fly, at my own expense, to face an audience that I know, from personal experience, to be, at best, largely unengaging, and at worst grossly provincial and rude?”

If Frampton found his audiences to be, at times, grossly provincial and rude, Jenkins makes a compelling argument that this disconnect was due to Frampton being too ahead of his time. Jenkins sees “Magellan” in particular as “imagining forward, and exceeding current technologies.” To start with, the idea of a cycle of very short films that would play on every day of the year is unwieldy, to say the least, within the bounds of the classic theater-going experience. But in the age of the Internet the idea begins to seem prescient. In fact, the “Magellan” project is based on a belief that we live within and are surrounded by images, that they compose our cultural memories and construct our daily lives, and as an artistic project it is an attempt to orchestrate for an audience member a daily environment of images, as much as construct a regular film. “Who would have thought that we’d live in an age when we are literally surrounded by moving images?” Jenkins said as he pointed to his desktop, where he believes that one day the completed sections of the “Magellan” cycle will be available for viewing on their appropriate days of the year. 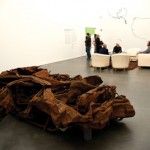 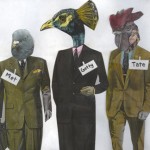 One Response to FILMS FOR ALL SEASONS