A skateboard deck sits upside down in a waist-level display case with its wheels and trucks removed. A brief message is written on the wood in aloof Helvetica lettering, “Southbank Skatepark 1987. A perfectly good…

Liam Gillick at the MCA 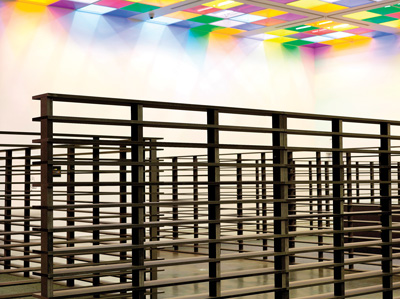 A skateboard deck sits upside down in a waist-level display case with its wheels and trucks removed. A brief message is written on the wood in aloof Helvetica lettering, “Southbank Skatepark 1987. A perfectly good skatepark improved by the addition of an art collection…” It’s doubtful that Southbank Skate Park—the cavernous space beneath London’s Queen Elizabeth Hall that has been used and transformed by skateboarders since the 1970s—ever had an art collection. Even if it had, the statement still begs the question: How could an art collection improve upon the vibrant and creative atmosphere of one of the world’s most renowned skate parks? To most people, the proposition likely seems ridiculous when considered in the same sense that the proposal is phrased in. Why put art in a place where it runs an elevated risk of damage or, perhaps even worse, of being ignored?

This skateboard deck is “Southbank Skatepark 1987” (2007), made by Liam Gillick for New York City’s Printed Matter. The work is a part of the exhibition “Three Perspectives and a Short Scenario,” an unconvenionally organized mid-career retrospective of the British artist’s work, on view at the Museum of Contemporary Art until January 10. It sits in a display case along with other ephemera related to Gillick’s various projects, all of them sharing a similarly slick design aesthetic, the visual equivalent of French vanilla.

Looking over the materials inside, one might be frustrated by the colorful glare produced by colored panels of plexi that have, for the course of the retrospective, temporarily replaced the standard opaque white panels that typically diffuse light through the gallery. These panels stand out as the most visually striking element of this installation without walls, filling one of the MCA’s sizeable first floor galleries. The display case is made from a matte black plastic material of which a number of slatted, cubicle-height walls that slice up and parcel out the exhibition space are also constructed. One division encloses a space around the exhibition wall text, another frames the display case.

Another set of these slatted walls, which bear superficial resemblance to both office furniture and Minimalist sculpture, marks out a space near a projection of images and text culled from Gillick’s past work in much the same way as the display case. The final set of walls frames the activity of the people within it as a speaker above blares a drum loop claimed to resemble the beat of Joy Division’s “She’s Lost Control.”

A number of classes here at the School of the Art Institute have been contacted by the MCA to assemble within this space and hold forth. Just how often these invited groups will be using the sub-space is unclear. When they do, their activities will unavoidably be on display, because while the slatted walls may delineate space, they provide only a modicum of privacy.

The question raised by Gillick’s “Southbank Skatepark 1987” can be boiled down, stated more simply, and used as a sort of guiding criteria for experiencing the entire show. How does the introduction of art to life improve the quality of either? The ironic statement on the skateboard seems at odds with some comments Gillick recently made during a public discussion with curator Dominic Molon and artist Jeremy Deller—whose “It Is What It Is” is across the hallway from Gillick’s show.

Often artists’ commentaries on their own work should be taken with a grain of salt. If artists were the final authority on what they produce, the viewer wouldn’t spend as much time looking at and thinking about their art to reach their own conclusions. Gillick, however, is a special case. An integral facet of his practice is the production of large quantities of text. Additionally, from time to time he steps forward to defend his work in print. So while another artist’s reflections on his or her own work might get dismissed as a flight of fancy, Gillick’s are fair game. During the talk, he stated clearly that his work “is not an ironic recognition of the failure of modernism.” Even if the sentiment expressed on the skateboard deck is ironic, Gillick has actually abandoned irony in favor of something equally frustrating: opacity. This issue was also touched on during the talk, regarding ways that relational work like Gillick and Deller’s attempt to avoid what is characterized as boorish didacticism. But in addition to the mere boredom didactic work is assumed to cause, Gillick harbors, in his words, “a kind of distrust of transparency.” In the talk he went on to say that transparency is too often carted out as an empty signifier, and because those who invoke it, like national governments, so routinely disabuse it, the concept is apparently emptied of all value.

For a work of art that, as Gillick has also said, depends upon the audience to complete it, the “distrust of transparency” it manifests is especially disheartening. What incentive is there to give of oneself to a work that resolutely refuses to meet the audience halfway? Because of its willful opacity, Gillick’s introduction of art to life—the handing over of a small parcel of museum space to certain groups—fails to produce anything more than a banal and benign art experience.
During another part of the artist talk, Gillick drew a distinction between the motivation of earlier generations of the avant-garde and what he presumes to be that of his own generation. For the historical avant-garde, the task was to find ways to keep making things “new” each time. For his own generation, Gillick stated that the question is not who can keep making new things, but who will actually stop making things first.

This statement reminded me of a figure from one of the historical avant-gardes for whom novelty and the end of producing art objects were not necessarily mutually exclusive. This person, Allan Kaprow, ended his essay “Education of the Un-Artist, Part I” (1971) with a phrase, curiously enough, borrowed and reworked from “The Communist Manifesto.” He writes, “Artists of the world drop out! You have nothing to lose but your professions!” For Kaprow, dropping out means allowing the work one makes to resonate in ways beyond art, to enter into a closer relationship with the practice of life. A relatively small number of artists, that might not even include Kaprow himself, have heeded this call. Even as Gillick sets this up as the structuring concept of his generation, we should not expect him to drop out either. Just as we cannot expect an art collection to improve Southbank Skate Park, we cannot expect Gillick’s art to improve our lives so long as it obstinately withholds its ambitions from us at the same time it employs us to achieve them. 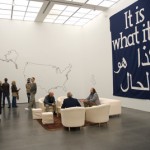