Banana Project is about a banana falling off from a table. The movements of the banana are like little magical moments, and its characteristics attract me. In The Banana Project, a banana is trying its best to do something that doesn’t fit the purpose of a banana shape: the banana cannot fall off the table by chance, like an orange
or apple, there has to be an outside force, clumsiness, or malice. Its shape does not lend itself to accidental rolling.
Bananas are weak, harmless, and humble.
When we finally pay attention to it, the skin has already been covered with bruise, and inside has been rotted like pus. You may say this film is about a banana? Yes; it is not about banana? No. Maybe a banana is not supposed to roll. A banana is curved to prevent itself from getting hurt by rolling off a table. As for me, as an artist, I wonder what art forms best fit my nature to accompany me through life. 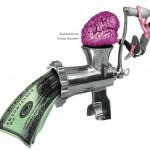 Financing Your Ideas as an Emerging Artist