Why I love Capitalism

See, my grandparents live in a small provincial capital in Southern France called Aurillac, where they know everyone and have voted communist four times in a row because—despite their Gaullist stances—they know the communist mayor’s mother and he’s a good sort. That’s the kind of place they live in, where party politics are trumped by close human associations. Unfortunately, the communist mayor still has communist policies, and this has turned Aurillac into a bastion of red terror.

The bakeries, all controlled by a central union, are not allowed to make bread on Sunday for some arcane union reason that none of us can fathom. Recently, one of the bakeries (our bakery) decided that since it wasn’t part of the damn union they’d just have a go at making bread on Sunday and everything would be fine. The costumers loved it. We bought loads of bread on Sunday. It was a fantastic novelty, this fresh bread on Sunday. And it was apparently so good for business that the other bakeries rebelled and took our bakery to court and now THERE IS NO BREAD ON SUNDAY. This is ridiculous! Why in the name of God should we not be allowed to purchase a fundamental food stuff on Sundays?

And this is why I love capitalism: because if France wasn’t such a crawling pit of pinko-insanity, then I’d be able to buy a basic necessity whenever I wanted—which would be brilliant. You hear that America? Stop whining and be careful what you bloody wish for! 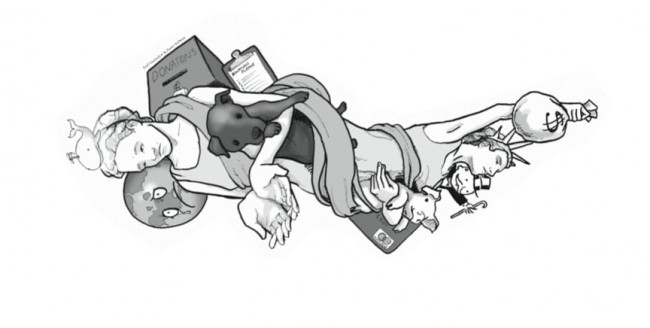 WHY I HATE Charity

A couple of years ago I was at my Dad’s house for a Christmas Dinner. It was me, my sister, her boyfriend, my step-sister and her husband, and my step-mother. Among the assorted Christmas presents was a white envelope for each of us “kids.” We stole glances at one another around the room. This was it, we imagined—the icing on the cake of presents. We were all convinced we would soon receive a substantial enough amount of money to buy a couple of CDs, or perhaps even pay off a utility bill.

When the time came we tore at the envelopes with haste and excitement. Inside there was an identical card for each of us, with the Greenpeace logo adorned upon it. Inside the card read the following words: “Dear [insert name], a donation of £30 has been made in your name to Greenpeace! Have a Merry Christmas!!”

This has not been my only run in with Greenpeace over the years, nor is it likely to be my last, but my hatred of charity doesn’t simply stop with them. Not only does charity ruin my Christmas, but it also often ruins my day. On many an occasion have I had to scuttle quickly by some street hustler, turning tricks for some charity or another, in order to avoid answering impossible and spirit-crushing questions like: “Do you have time for starving children in Africa?!” “Do you care about people living with HIV?!?” “Do you want to see the aged die alone in cold apartments, eaten by cats?!?!?”

So this makes me a cold, horrible person who loves capitalism and doesn’t want to help people, right? Wrong. If charity was really more than a means of making ourselves feel like we are helping others, we would actually do something to really help them, like share all our wealth evenly between those poorer than us so we are all on a equal level, volunteer at a non-profit and do the real dirty work or smash the GODDAMN EVIL CORRUPT CAPITALIST SYSTEM THAT OPPRESSES, CONTROLS AND ROYALLY FUCKS ALL OF US…

As Slavoj Zizek says, if you don’t want a revolution that’s fine—just admit it. But don’t pretend your bits of charity are going to change the world. 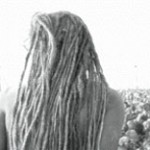 Photos of Faith and Movement