The Blackest History Month Ever

by QX Roper Four score, and many centuries ago, my great ancestors were kidnapped from their homes, torn away from their families, robbed of their dignity and given the burden of creating one of the most powerful nations on this Earth.  Their children, descendants, and generations to follow carried this painful weight, not comprehending what …

Four score, and many centuries ago, my great ancestors were kidnapped from their homes, torn away from their families, robbed of their dignity and given the burden of creating one of the most powerful nations on this Earth.  Their children, descendants, and generations to follow carried this painful weight, not comprehending what their contribution would be to this great country called America.  Most of them did not understand their identity but all of them understood the struggle.

Today, I find myself laughing at the irony that a century ago a literate black man was to be outlawed, and here I am, an articulate journalist, speaking of how evil white people “used to be.”  These comments don’t come from a bitter place of resentment, but if we are to discuss exactly what Black History is, we can’t overlook the past realities of slavery, segregation, racism, prejudice, inequality, lynching, ridicule, gentrification, and psychological deterioration.  So how do we define this month and why is it important?

Well, in my opinion, the 28 day holiday serves as an annual reminder that, as a Black American, I must be on my ultimate hustle.  To achieve greatness, I have to work 12 times harder than any of my white peers just to be viewed as “equal”.  I used to get made fun of for being an overachiever. Most people don’t understand my need to work overtime as my passion to go to school full time. Everyone makes comments about me doing too much.  I used to have a part time job at Niketown and had a hard time making friends because being in grad school with high goals and no children while black was a bit odd. But when you experience the true meaning of being Black in America, it’s hard to accept anything less than perfect. You either go hard or go home.

Each February I am reminded of all the ridiculous, unrealistic, “Lifetime: Television Made for Women” BS I had to endure the previous year.  At the moment, I am reflecting about my life as an undergraduate at my former school’s Theatre Department.  This was a very special place where professors told me that I must minds because being in grad school with high goals and no children, while black, was a bit odd.  But when you experience the true meaning of being Black in America, it’s hard to accept anything less than perfect.  aster a black dialect because that would be 80% of my work, that I had good auditions but didn’t really quite “fit” any of the roles, and that my type would lead to a career playing stereotypes.  I graduated having played a criminal, a servant, a juvenile delinquent, and a voodoo priest in some of their productions.  Now, I am at SAIC pursuing a career in journalism.

For someone like me, Black History Month is a time to just think about how corrupt everything is. But it is also an opportunity to inspire change.  Oh, yes.  There’s that word again, “change”.  And thanks to Obama and his incredible league of good doers, the word has been beaten into our skulls.  But before we allow it become another cliche term (such as “getting jiggy”) we must really make an attempt to understand what changes can be made.  Do you acknowledge security guards on campus?  Do you surround yourself with a diverse group of people?  Have you ever watched BET?  Have you ever been on the south side?  Would you ever date someone outside of your race?  Do you have any role models who are not white? Did you answer “no” to any of these questions?  Are you lying to me?  Okay.  Now we are getting somewhere.

For the most part, no one takes this month seriously and I doubt anyone in my new setting will be actively engaged in anything beyond Oprah and Obama—but Black History Month is a little bit more than just reading a poster about Martin Luther King Jr. It’s a little bit deeper than knowing that Jackie Robinson played baseball and that Harriette Tubman was a conductor on the Underground Railroad. The bottom line, is that there is no excuse for any American of any race not to take interest in Black History Month because as the McDonald’s commercials say, “Black History is American History”. We should all be very aware of the history of our country included regardless of how uncomfortable it makes us feel.  Black History Month is a like a friendly Google reminder that pops up and says “Hey Bucko, Black people are important too!”  But do you click on the ads and do a little investigating on the subject or do you merely hit the ignore button?

So I strongly urge you to take a risk in February 2009. Go ahead!  You’re in school.  Educate yourself.  Yes, you might have voted for a Black president but there are still major problems with race in this country and knowledge is the first step in repairing that.  Before you can allow yourself to have any spirited reaction to this article, I would hope that it sparked an interest in more information.

And for those of you who have been protesting for a White History Month, may I remind you that every fourth thursday of November we are all forced to celebrate the genocide and extinction of Native Americans… I mean seriously, since when did going away parties become annual? 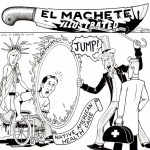