US museum destinations for the holidays

After having spent the last year traveling from New York’s MoMA to Fort Worth, and then to the National Gallery in D.C., Puryear’s exhibition of exquisite sculptures is currently making its final appearance at SFMOMA. This breathtaking retrospective brings together a collection of wood, rawhide and metal sculptures that entice the eye with their seeming simplicity and perfection of form, while quietly revealing their complex structures and intricate processes. While many large rounded forms, variously composed of knots of wood, latticework, or silkenly sanded pine, cedar or mahogany, populate the exhibition, the most unassuming aspects or pieces are Puryear’s most impressive. His series of wall-hung wooden circles, each differing slightly in color, form or complexity, possess a simple elegance and seamless compositions that belie the difficult and laborious task of their creation.

While this show is slated to stop at Chicago’s MCA this coming May, it is not to be missed in any of its incarnations. Using the exhibition spaces provided in order to create mood-altering environments, Eliasson’s large installation works, which use light, water, sound, mirrors and some organic materials, to recreate the atmospheric extremes of his native Scandinavia, are incredibly powerful and affective. This exhibition, which was spread between two museums in New York, will be drastically cut and altered for each of its venues due to both the size of many of its pieces and the effect of various exhibition spaces. Each installation of Eliasson’s work is a unique and mystifying experience.

Bringing together some of the biggest names in the art world, in order to indulge in their pasttime of exhibition experimentation, the Guggenheim has asked Angela Bulloch, Maurizio Cattelan, Liam Gillick, Dominique Gonzalez-Foerster, Douglas Gordon, Carsten Höller, Pierre Huyghe, Jorge Pardo, Philippe Parreno, and Rirkrit Tiravanija to formulate a scenario that takes the exhibition as its medium. These artists come together again to create a show that comments on more than just art, extending its borders to include architecture, design and everyday life. As always, Wright’s unique architectural form for the museum only augments this endeavor.

Exhibiting over a hundred works from this archeological find in China, this show offers the most complete terracotta warrior figures ever to be shown in the US. These sculptures, initially discovered in 1974, guarded an immense underground palace: the tomb of the First Emperor, Qin Shihuangdi, who died over two thousand years ago. Accompanying them, both in the ground and on display, are terracotta court officials, acrobats, musicians, chariot horses, and bronze water birds discovered beside the complex’s underground river.

Akerman’s “hyperrealist” films take the viewer on a journey into the cracks of narratives and the spaces in time that lie between images. This exhibition, her first major traveling show in the US, features multi-media video installations from her “documentary series:” D’Est (From the East), From the Other Side, Là-Bas, Sud and Women of Antwerp in November (a new work created especially for the exhibition). These films retrace journeys and border crossings relating to physical space and identity, exploring the changes of season and terrain, issues of immigration, murder and self-identification. In her work, Akerman captures the essence of what it means to perpetually exist in transition.

Using mass-produced, throwaway items such as toothpicks, scotch tape and plastic drinking straws, Donovan creates impressive sculptures that mimic and defy nature. Her process, which entails the extended repetition of an act upon a particular material in order to create something grand and unexpected, resulted in a mountain made of buttons, a cloud of styrofoam cups, coral composed of paper plates and mylar moss. These elegant and inspiring works contain a sense of beauty and drama that deny their banal creation and components.

Taking advantage of technology’s ability to detect physical presence, the artists in Act/React have created an exhibition that allows the viewer to participate in its own creation just by moving through the gallery space. Interacting not only with the artworks on display, but with the other visitors to the exhibition in order to effect change in the work, the term “viewer” no longer seems to apply to the museum goer at this show. Through these installations, Janet Cardiff, Brian Knep, Liz Phillips, Daniel Rozin, Scott Snibbe, and Camille Utterback ask their audience to redefine their relationships to art.

This exhibition investigates traditional or interventionist broadcasting and re-broadcasting techniques used by artists such as Dara Birnbaum, Chris Burden, Iñigo Manglano-Ovalle and Nam June Paik, from 1966 to today. Focusing on more contemporary endeavors, curator Irene Hofmann manages to contextualize these works within an art historical trajectory. Covering topics ranging from Nixon’s  US presidential campaign in 1972 to psychics on local Venetian television stations in the late 1990s, the pieces probe the breadth and influence of this pervasive medium. 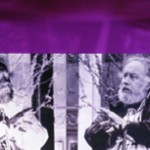