Thanksgiving, a celebration of family, food, and giving thanks, is typically spent at home. However SAIC’s very short Thanksgiving break and the recent downturn in the economy will yield some interesting alternatives this year.

Thanksgiving, a celebration of family, food, and giving thanks, is typically spent at home.  But SAIC’s very short Thanksgiving break and the recent downturn in the economy will yield some interesting alternatives this year. Students who live relatively close to school will be able to drive home and very ambitious students may still fly home, refusing to miss the home-cooked meal.  Still others, most likely a thrifty minority of students who can’t manage to be temporarily adopted by a nearby family friend or roommate, will make-do with what resources they have at school.  Some stay to avoid the cost of flying home, some because the short break offers an opportunity to get work done for the following week.

“I’m celebrating Thanksgiving with my Aunt in Chicago since the plane tickets cost too much to go back to Oregon for the weekend,” says SAIC student Kira Mardikes of Portland, Oregon; “I would have loved to be able to visit my family and friends, but I’ll get to [visit them] winter break.”

The number of students who, like Mardikes, won’t travel home for the break will probably grow this year as the economy increasingly affects the nation’s approach to traveling.  With higher airfares, many people are looking for alternatives to flying home. According to a poll by Travelocity, sixty-six percent of respondents say concerns about the economy will affect their holiday travel plans. Thanksgiving airfares are “absolutely higher than they were last year,” says Tavelocity Editor Amy Ziff. She adds, “Airlines have been very candid about the fact that they need to raise their prices.”

According to USA Today, “Airlines will offer almost 3,000 fewer domestic flights a day during the Thanksgiving season, promising fewer choices, fuller planes and higher fares for millions of Americans.  Compared with last Thanksgiving season, there will be 11% fewer flights- 2.6 million fewer seats- on non-stop domestic routes from Nov. 20, the Thursday before Thanksgiving, through Nov. 30, the Sunday afterward.”

Felicia Liu, an SAIC student who moved to the United States from Korea when she was 8 years old, puts more of an emphasis on friends than family for the Thanksgiving holiday, “I didn’t start celebrating Thanksgiving until I moved here to this country, so I just like the food and atmosphere of it.  You usually find me spending Thanksgiving with friends and their families.”  She’ll be staying in Chicago with a handful of her dormmates, who have decided to cook their own Thanksgiving meal at an acquaintance’s nearby apartment in Humboldt Park.  Their only rule is BYOC, Bring Your Own Chair.

Other international students plan to use the time to relax and do work, like Vincci Fung of Hong Kong who says she’ll use the day to “rest and walk around the city.”

The school sponsors one Thanksgiving solution, its own Thanksgiving dinner, open to all students on Thanksgiving Day from 1pm-4pm. “We usually show a good movie and have some good hang out time,” says Residence Director Abigail Holcombs.  The school offers vegan options and in past years hosted about 200 students for the event. 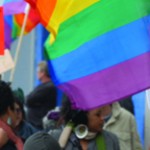