About a week before Hurricane Gustav hit in September, a number of dark, faintly humorous artworks appeared around New Orleans.

Viewers in front of the Lower Ninth Ward Center for the Arts, housed in a former residence, reconstructed as an exhibition space.

About a week before Hurricane Gustav hit in September, a number of dark, faintly humorous artworks appeared around New Orleans. A boy using a lifebelt as a tire swing, a small figure reaching after a flying umbrella on the side of the levee wall in the still-devastated Lower Ninth Ward, Military Police looting a television from an abandoned property, and perhaps most perplexingly, a small blonde-haired boy writing, “I must not copy what I see on the Simpsons,” on a chalk board.

Banksy had been to town, integrating his murals into the fabric of New Orleans. News of the graffiti quickly spread through the City by word of mouth, and further afield on blogs and Flickr pages. But whether the graffiti was formally part of Prospect.1, the first New Orleans Biennial, is predictably unclear and arguably irrelevant. The sudden appearance of the work was a fitting precursor to the vast, sprawling, exploratory nature of what is touted as “the largest biennial of contemporary art ever organized in the United States.”

“Prospect.1 New Orleans” includes over 80 artists spread across two dozen locations throughout New Orleans, in addition to various satellite exhibitions organized by local artists and galleries.
The concept for Prospect.1 came from New York curator Dan Cameron. Cameron went to New Orleans as Director of Visual Arts for the New Orleans Contemporary Arts Center in May of last year. Previously he has curated the Istanbul Biennial in 2003 and the Taipei Biennial in 2006. Cameron has a long personal history with New Orleans, and was aware that hosting such an event in the city would prove no easy task.

Some work is installed in traditional settings, such as the New Orleans Museum of Art and Contemporary Arts Center. The Biennial spreads out into other New Orleans cultural institutions, such as the Museum of African American History, while yet more work can be found in the vacant lots of the Lower Ninth Ward.

As such, Prospect 1 provides visitors with a rather unusual Biennial experience. It is one-half standing around looking at work, and one-half eccentric bus tour through the extraordinary patchwork of post-Katrina New Orleans.

For New Orleans natives it provides a rather different experience. The boost it provides to the economy is without question. While the tourist friendly areas of the city have rebounded, the recovery from cancelled conventions and the lengthy rebuilding process is not yet over.

Culturally, Prospect.1 has the potential to provide an interesting opportunity for local artists. The map provided to attendees of the Biennial is daunting in its detail. It lists not only all the “official” exhibition sites, but also the many local, independently run galleries hosting shows concurrent with Prospect.1. Outside of the downtown areas such as the Warehouse District, these galleries do not typically draw in outsiders.

However, beyond the New Orleans art crowd, Prospect.1 appeared rather ill-publicized in the local community. As outdoor installations went, residents were often initially uncertain as to what was going on. Many people seemed to know of an individual show, but were unaware of the Biennial as a whole.

Dan Cameron encouraged participating artists to visit New Orleans prior to the Biennial’s installation. What emerges is an interesting mix of standard Biennial and specific artistic responses to New Orleans.
The Contemporary Arts Center houses some of the more surprising New Orleans-specific work. Visitors are greeted by Jackie Sumell’s work The House that Herman Built, which asks, and answers, “What kind of house does a man who has lived in a six-foot-by-nine-foot cell for over 30 years dream of?” Herman Wallace, one of the Angola 3, has spent over 30 years in solitary confinement for a murder he did not commit. He is awaiting release since his conviction was overturned earlier this year. Summel documents her correspondence with Wallace over several years, presenting a replica of his cell alongside blue-prints and models of the home Wallace dreams of. As outsiders may visit with an expectation of seeing the devastation and injustices that followed Hurricane Katrina, Summel presents the face of another long-running local injustice.

One of the more eccentric pieces of Prospect.1 is a collaboration of Cao Fein and Map Office, called NO LAB in RMB City.  A room is created, with outline illustrations of the outside actors who have come to New Orleans since Hurricane Katrina: Brad Pitt, Barack Obama, Spike Lee, and the cast of Paul Chan’s Waiting for Godot, accompanied by single line statements. “Fifty Percent of New Orleans’ artists lost their homes and dozens their life’s work,” “That would be a huge boost for the economy,” “Tourists buy souvenirs. Collectors buy art,” and perhaps the greatest give away of the tongue-in-cheek nature of the piece, a quote from curator Dan Cameron describing his first time in New Orleans: “I was having my first soft-shell crab po-boy, watching the sunset and listening to the Nevilles.” Inside is a projection of a version of the Online Virtual Reality game “Second Life,” in which New Orleans has been recreated, inhabited by these outside actors, moving through the virtual city before the flood waters they came in response to. It is awkward and steeped in parody, but perhaps justifiably so in the context of an exhibition that is primarily by outsiders.

The work displayed in the Lower Ninth Ward takes a very different tone. While “disaster tourism” still profits in the neighborhood, visitors rarely go to the neighborhood outside of the confines of a tour bus. Prospect.1, to its credit has some very interesting artistic responses to the all-but abandoned area, and for visitors walking around and interacting with the surroundings.

Mark Bradford’s installation Mithra takes the form of a giant ark, created from sheets of wood once used to board up buildings in the neighborhood, still partially adorned with pasted on posters. The ark was created while Bradford was in residence at the L9 Center for the Arts, a local home for art exhibitions and education founded by photographers Keith Calhoun and Chaundra McCormick.

Calhoun and McCormick’s photography is on display as part of Prospect 1., providing visitors with a context for the Lower Ninth Ward. Their work shows decades of daily life, faith, labor and music in the neighborhood, alongside a display of prints heavily damaged and yet extraordinarily manipulated by floodwater.

Across the street Nigerian-born artist Wangechi Mutu became actively engaged in the community. Mrs. Sarah’s House is a frame of what was once the home of local resident Mrs. Sarah, covered in lights with a single chair placed in the center. Mrs. Sarah lost the money she was to use to rebuild her home as a result of contractor fraud. Mutu is creating a series of prints of the installation in the hope of raising the $125,000 needed to rebuild her home where Mutu’s representation presently stands.

There are, of course, risks associated with installing work in the Lower Ninth Ward. Paul Villinski’s Emergency Response Studio, a FEMA-esque trailer converted to use green materials and solar power is an interesting structure and concept; it raises some good and very current ideas as to, perhaps, what could be done better next time. However, in a place where residents are still attempting to rebuild, have been made sick by the toxicity of trailers provided by FEMA and are now being forced out of the trailers by city ordinances, the structure’s presence is perhaps a little hard to swallow.

And then there’s the risk of just straight misinterpretation. By making the Kafkaesque reality of the neighborhood into the setting for an art exhibition, the artwork can not only reflect its surroundings, but the surroundings can be mistaken for art. One recently returned family placed a sign in front of their hyper-modern home, built by Brad Pitt’s Make it Right foundation, notifying visitors that their home was not a display piece.

Meanwhile Leandro Erlich’s Window and Ladder—Too Late for Help suggests a belated escape route for those residents now infamously stuck on the upstairs floors or attics of their homes when the levees were breached during Hurricane Katrina. The height of the ladder is roughly equal to the depth of the floodwater. When the installation was first installed, the remnants of three houses, crushed and bulldozed into a corner, sat around 15 feet away from the piece.

A week into the exhibition, the city of New Orleans finally arrived to remove the now three-year-old debris. The next day an art enthusiast who visited the Lower Ninth Ward to show companions the exhibits, eagerly asked, “Where did the rest of the installation go?”

Additional Info:
Prospect.1 is free and open to the
public until January 18, 2009. 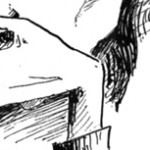