Art on Track: A Review

The entire Art on Track exhibition was a performance-based spectacle in which hundreds of people at a time played an enormous game of musical chairs.

Something was different on the Adams and Wabash CTA platform the night of August 30th. Commuters getting off work and tourists alike were baffled to glimpse an Out Of Service eight car Orange Line train completely filled with art, music, costumes, and hundreds of people. Attendees of the Art on Track juried exhibition paid five dollars for a wristband on the lower platform, which permitted entrance to the unusual train running on the upper platform.

David Grant’s series of photographic portraits in which cultural and racial stereotypes are emphasized and then debunked was cleverly displayed along the top rectangular bar of the train where advertisements are usually placed. Though Grant was nervous about how the photos would be interpreted by such a general audience, he enjoyed hanging out in the train car to catch the reactions of excited guests who seemed to understand the irony of the portraits and appreciate the sentiment. The message of his work seemed especially relevant in a public space where people of all different cultural and racial groups interact on a daily basis. Grant says that a CTA official walked through each train car before the exhibit to approve the content of the work, which resulted in a few of his pieces being censored with tape or taken down altogether.

Mark Brown’s distinctly charming, humorous, and well-calculated panoramic drawing of bizarre landscapes including cars, giraffes, movie cameras, and all kinds of hidden doors was also displayed in the advertisement bar, while Stan Chisolm opted to place his silk-screened and watercolor painted paper plate caricatures on the ceiling of the car, causing eyes to roam the entire width and length of the train car. The print medium (photographs, etchings, woodcuts, or screen prints) was a logical and popular choice for this exhibition since, in comparsion to a traditional gallery space, the likelihood of the original work being damaged or stolen was heightened.

Although most of the artists favored 2-D mediums, some cars showcased abstract crocheted curtains strung from the ceiling to the windows or even sculptural dummies of faceless CTA train riders. Featured galleries The Silver Room, Flat Iron Artists Group, Peter Jones Gallery, Colibri Gallery, and Quennect 4 Gallery often created complete environments out of their CTA train cars, in which the artists from each gallery collaborated to build a cohesive space that completely converted the interior of the train. Quennect 4 Gallery attempted to translate the seats of the car into a breathtaking exterior space of fake grass, flowers, overhead silk scarves, and graffitied text-based boards. 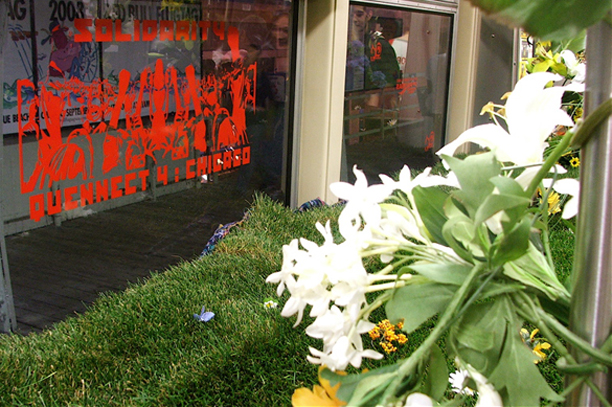 Due to the public nature of the show, it was unclear whether the street artists such as the notorious Chicago Puppet Bike, a painted wooden box converted into a stage for bunny hand puppets, were planned as part of the show or simply attended.

The most successful train cars were the ones that were consistent in concept and presentation. Attendees seemed to favor the train cars that included performative aspects such as live music, costume, and dance. One car in particular featured a live Mariachi band and Mexican-influenced woodcuts and etchings.

Whether the work inside the Art on Track train cars was 2-dimensional, 3-dimensional, or 4-dimensional, the entire exhibition was a performance-based spectacle in which hundreds of people at a time played an enormous game of musical chairs, running between one train car to the next at each platform, from the entrance at Adams/Wabash all the way to Library/Van Buren and back again to repeat the track from 6 pm-10 pm.

Curators of this massive artistic undertaking may or may not have broken even on their financial investment of the CTA train, but the exhibition overall was a success in bringing together artists, families, students, and curious people off the streets of Chicago to experience eight train cars full of abundant and diverse work from Chicago artists. 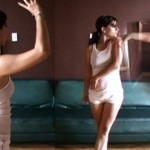