The Whole World is Watching… Again.

Reenact ’68 are planning to relive the 1968 Democratic National Convention Protests.

On Thursday August 28, a group of Chicagoans will reclaim the idea of historical reenactment for a symbolic purpose. Reenact ’68, a group of self-described “troublemakers, activists, historians, artists and political theorists,” are planning to relive the 1968 Democratic National Convention Protests, with props, costumes, snake dancing, speeches and cover bands, asking people to interrogate their city’s history.

In Denver, Barack Obama is gearing up for the convention today, with his new VP Joe Biden in tow. Meanwhile, back on Obama’s home turf, Reenact ’68 will commemorate the 40-year anniversary of the city’s riotous protests on the final day of the convention, at Michigan and Balbo in downtown Chicago at 5pm.

Liam Warfield, a local writer, came up with the idea and began asking his friends and family to get involved and help spread the word. Now the solidified group meets every Sunday at Wicker Park fountain to hash out the logistics.

“Protests are simplistic, us-vs.-them affairs which leave everyone feeling frustrated,” says Warfield. ‘No War in Iraq!,’ we scream–yet, lo and behold, the war in Iraq continues unabated. What we’re attempting calls for more subtlety, more ingenuity, more creativity and more critical capacity than the usual protest. We want to redefine political protest, and make it something more than simply saying ‘No!’ We can say yes and no simultaneously.”

Warfield is well known around Chicago for his zine, War Against the Idiots, and for founding The Skeleton News, a local publication modeled after the radical underground papers of the 60’s. Given his obsession with this period of U.S history, he must have his own answers to the questions that the reenactment poses.

“We are not so much marching forward as stumbling ’round in ever-more dizzying circles,” says Warfield. “War and injustice have proven persistent human conditions, and they are as ubiquitous in 2008 as in 1968. I think that to a large degree ‘progress’ is an illusion, or at least an oversimplification.”

The 1968 protests in Chicago happened for many reasons. Widespread protests against the Vietnam War were further fueled by the assassinations at home of both Martin Luther King and presidential candidate Bobby Kennedy. The nomination of Hubert Humphrey for the position after Kennedy’s death, who held the most conservative policy about the war, was the final cause célèbre for protesters. With the MOBE (National Mobilization Committee to End the War in Vietnam) and the yippies (Youth International Party) denied permits by the city, the protest soon escalated into a war in the streets, and several thousand demonstrators and bystanders were brutalized by police force.

In Denver a group calling themselves Recreate ’68 are planning for convention week too – a protest to this year’s democratic candidates. Unlike the Denver group, however, Warfield is quick to refute the suggestion that the reenactment is intended to express dissatisfaction with Obama.

“Obama is striking a highly unusual note of hope in American politics, and Americans are responding with astonishing enthusiasm. It’s kind of a beautiful moment,” he says. “That said, the emergence of a decent presidential candidate is all the more reason for us to engage critically with history, and to try to understand the world that we live in, which is the fundamental purpose of this reenactment.”

Warfield and the other reenactors are expecting 1,000 plus participants in Thursday’s proceedings. They also have a program of events that includes a 30-piece marching band called Rude Mechanical Orchestra, an MC5 cover band and various impersonators to play the parts of Jean Genet, Bobby Seale and Allen Ginsberg. Warfield also has high hopes for the outcome of the reenactment. 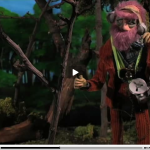