A good place to scatter your thoughts. Karen Kilimnik at the Museum of Contemporary Art.

By Claudia Arzeno May 2, 2008 Uncategorized

A Good Place to Scatter Your Thoughts

Karen Kilimnik’s first major retrospective currently graces the walls of the Museum of Contemporary Art in Chicago. Conceived and curated at the Institute of Contemporary Art in Philadelphia, the exhibition provides its audience with a deeper understanding of the artist’s work. Kilimnik’s floor-based ‘scatter pieces’, works consisting of objects scattered on the floor, combine kitschy elements to create a heightened sense of drama, as well as the feeling that you have unwittingly walked into an uncomfortable situation.

One of the scatter pieces, Switzerland, the Pink Panther & Peter Sellers & Boris & Natasha & Gelsey Kirkland in Siberia, 1991, is a whimsical scene in which two Pink Panther stuffed animals sit with a fondue pot between them, on top of fake snow. The piece also includes drawings of the cartoon characters Boris and Natasha, as well as candy bar wrappers and a pair of ballet slippers. One feels the weird sensation of having walked into some kind of sugar-infused psychedelic picnic. On the wall next to the piece, though, hang drawings portraying the Pink Panther in the snow. One, Pink Panther running from the abominable snowman, shows the Pink Panther running against a backdrop of snowy mountains. It is as though the story was begun in the drawings and ended happily with the Pink Panther gorging himself on chocolate as he celebrated not being caught by the abominable snowman.

The exhibit also contains a room filled with lovely images of ballerinas, including a small white gazebo with a video inside that plays classical music with images of tiny ballerinas dancing. The flowery room represents many little girls’ fantasies, and has both a calming and disturbing aspect to it. The classical music emanating from the video inside the gazebo and the partial enclosure of the gazebo itself makes it seem like the viewer is in another world. Yet the moment you come out of the gazebo, you are staring at the opposite wall in the original gallery. This wall does more than break the fantasy mystical spell created by the tiny hypnotic ballerinas. The wall is splattered by what looks like blood, with a bloody turkey fork on the ground just below it (Helter Skelter, 1992). This quickly brings you back to the violence portrayed by her other pieces and makes the ballerina room seem like a psychotic escape from the violence of real life.

Karen Kilimnik’s most memorable piece from this exhibit lies in the adjacent gallery space. The red room, 2007, is a structure built inside the gallery space. This smaller, more intimate room, is wallpapered in red, has a red velvet circular couch in the middle, and paintings are hung, salon-style, around the room. At first glance, one might think Kilimnik is reproducing somebody’s room, yet upon closer inspection it is noticeable that some of the paintings are copies of historic paintings, and others portray present-day celebrities in historic contexts (such as Scarlett Johansson in her acting role from the Vermeer film, Girl With a Pearl Earring, both a take on the film and Vermeer’s original painting).

The red room functions both as a showcase of Kilimnik’s talent at reproducing and quoting works as well as respite from the emotional charge of her other paintings, such as Helter Skelter. You can sit on the couch and admire the paintings, try to distinguish who the people portrayed are, and count how many subjects are repeated. It becomes a fun exercise in both art historical and pop culture knowledge.

One particular piece in the show is hard to find. This piece, Smallpox, 1990, is located behind the structure that contains The red room. Smallpox consists of two red splotches on the wall, placed very close to the ground. There is also a smattering of white dust and a square piece of pink fur on the ground below it. Did something go very wrong for the Pink Panther behind this room? The placement is curious, yet is quite effective, since The red room leaves the viewer refreshed and ready for more.

The exhibition offers a creative and interesting look into the varied works made by Kilimnik, yet this is one show in which a knowledge of psychoanalysis would be handy. 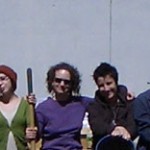 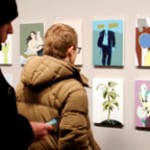