Andrew Lochhead, one half of AndrewandAndrea, talks to Francesca Wilmott.

By Francesca Wilmott May 2, 2008 Uncategorized

AndrewandAndrea, documentation of the opening of Peter Hoffmann’s exhibition at Minidutch, Home Economics, courtesy of Andrew Lochhead and Andrea Slavic.

Andrew Lochhead, one half of AndrewandAndrea, talks to Francesca Wilmott

Andrew Lochhead and Andrea Slavik hired a plane to fly across the Chicago skyline last fall with a banner asking, “Is That All There Is?” They are MA candidates in the department of Visual and Critical Studies at SAIC. Their current exhibition at the apartment gallery Mini Dutch addresses issues familiar to an art-school public in a series of photographs and video work called Home Economics.

Francesca Wilmott: How did your artistic partnership with Andrea come about, and how does the collaborative spirit reveal itself in the works and aesthetics of AndrewandAndrea?

Andrew Lochhead: I don’t know so much about the aesthetics, these are usually determined by the nature of the project. That being said, there is rarely a time that we try and individually illustrate our collaborative process visually. We like to try to present something cohesive, and I guess perhaps that is our collaborative aesthetic, trying to present a united voice. When we conceived the idea of the AndrewandAndrea collaboration, we were very interested in exploring the idea of branding and presenting ourselves as an artistic brand entity. We were very conscious to present a united voice in our work. As far as how our collaboration came about, we have known each other since we were 15 years old. We met on a city bus in our hometown of Windsor, Ontario.

FW: How does Home Economics facilitate in the dialogue surrounding the apartment gallery phenomenon?

AL: The idea behind Home Economics was quite simple. We were interested in illustrating the importance
of social networks within the apartment gallery. In many ways these networks are more important than the artwork, and in many ways are just as much on display as the work itself. We hoped by presenting video and photographs of these social spaces that we would be able to turn a mirror, so to speak, on these social spaces. Engaging the audience in a reflection of their role in the space.

FW: The title Home Economics seems to point to the alternative modes of sponsorship and display apartment
galleries offer to counter the lack of funding in the art world. However, the photographs and video are also an obvious commentary on the social networks that develop around apartment galleries. How does your project approach these two themes?

AL: I think what we are really trying to get at through the exhibition is the ways in which these social networks maintained, nurtured and developed in these spaces have specific economic consequences beyond the gallery walls.

For example, the spaces often attract the young, hip artist populations to often marginal, on-the-cusp-of-gentrifying neighborhoods. Now, by no means am I saying that these spaces are solely responsible, but I think they help to contribute to the creation of a culture of cool around certain neighborhoods, and that can help raise an area’s profile, attracting investment. It seems, and this has been noted by other writers on the subject, that these spaces seem to appear on the cusp of gentrification, and we definitely wanted to allude to that in the exhibition too.

As far as alternative methods of funding and display vis a vis a more established gallery system, I think these issues circulate around the show as well. But again, it is the social and its ramifications in these spaces that remains at the heart of the exhibition.

FW: Going back to the issue of the public, what role do you see the apartment gallery public has in interacting with your work? Are your aesthetic choices made with this audience in mind? Could someone outside of this social group understand and participate with your work, or is it inherently site, time, and viewer-specific?

AL: I think this is a show that might hold more appeal for an apartment gallery public. Many folks are indeed featured in the show, so it’s an opportunity to see yourself on display. I think those who are not in the group also can get a lot out of it as well. I would hope that the obvious site specificity of the space would be one clue as to what was going on, and I think with a little critical analysis on the part of the viewer, it is pretty obvious what we are showing them. Basically we want people to think about where they are and what they are engaging in.

I think there is this binary that people draw between these spaces and more established museums and galleries that I don’t always think is productive. I think it’s wiser if we look at these spaces as part of the same art world. I guess we also in some ways hope to recreate or reference the society photograph or the lifestyle photograph
we see in the Sun Times or in popular magazines like URB, for example.

The club photo-society pictures and whatnot. I think it’s a format we all recognize and a form that carries specific socio-economic connotations, and serves as instructional media on how we represent ideas of class and status. I hope these photos go some length to speak toward ideas of identity represented within them too. 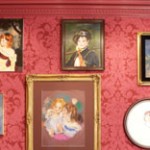