Thinking With A Camera. Ed Ruscha at the Art Institute of Chicago.

By Ricardo Harris-Fuentes May 1, 2008 Uncategorized

Thinking with a Camera

Ed Ruscha has said, “I would say I came to painting through photography.”

Indeed, this is how the viewer comes to the work of Ed Ruscha, through his photography, in the Art Institute’s subtle but illuminating exhibition of Ruscha’s photographic work. Given the exhibition’s educational value, it is appropriate that the show is situated in the Art Institute’s basement, where the School of the Art Institute held classes for many years. The greatest asset of the exhibition is not any single object, but the glimpse it provides into the artistic process of one of the most recognizable twentieth century American painters. This photographic practice can be viewed, in part, as the genesis of Ruscha’s distinctive painting aesthetic. The exhibition is divided into three groupings, loosely defined by media. In the main room hangs Ruscha’s photographs, arranged thematically. Often the photographs were conceived as serial projects, with the title indicating the impetus for the project (Thirty-Four Parking Lots in Los Angeles, Some Los Angeles Apartments, etc.). Adjacent to the main room is a smaller one with Ruscha’s remarkable and humorous self-published books.

The following two humbly-proportioned rooms carry handsome examples of Ruscha’s work on paper and canvas. Although the arrangement of the exhibition is not immediately clear to the visitor, it sheds light on Ruscha’s working methods and the evolution of his subject matter. Many of the serial photographs were conceived to be published in books. However, some of those images subsequently became the motifs for some of Ruscha’s most memorable paintings.

Admittedly, not all of Ruscha’s photographs hold attention as one might expect from the work of Walker Evans or Robert Frank, both of whom influenced Ruscha. The photographs in the exhibition read like ingredients to a gourmet meal. Walking through the exhibition unveils the meandering of the artistic mind through the medium of photography.

Of particular interest is the group of photographs Ruscha took while on a trip to Europe in 1961. Contained in these early snapshots are the seeds of what later became the basis for some of his most iconic imagery: gas stations, strong diagonal compositions and images of signs.

Seeing Ruscha’s visual travel-log of Europe juxtaposed with the series entitled Twenty-Six Gasoline Stations, 1961, we can begin to understand how Ruscha comes to view his own world, “The West,” in a cool, detached, and almost sociological light. It is as if Ruscha returns from Europe a foreigner in his own land. At the same time, there is a sense of excitement when we see photographs such as Standard Station, Amarillo, Texas, 1962, because we know this image led to some of Ruscha’s most renowned paintings and prints.

Photographic references are obvious in the work of Ed Ruscha, but what this exhibition shows us is the dynamic journey a Ruscha image makes, from an early snapshot to a modern masterpiece. Ed Ruscha and Photography may not have the blockbuster appeal of the Winslow Homer and Edward Hopper exhibitions exhibited upstairs this spring, but the show provides a different opportunity for students and museum-goers alike—a chance to enter the artist’s studio and see a master at work. 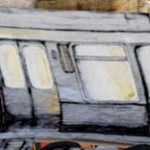 The Challenges Faced by International Students