Bryce Dwyer: Can you talk about your participation in the workshop this
week?

Rirkrit Tiravanija: I didn’t have any real preconceived ideas, except that perhaps the workshop would be focused on the kind of social space that doesn’t exist at the School, or at least in that particular building (Columbus). Sonny’s Cafe was there when I went to the School and when I walked into that room I said, “It looks exactly the same,” and that was 20 years ago. I think that there is some kind of issue to be addressed around that idea of how much the School actually functions as a social space and how much of that is also passed on to the occupants of the building. A student said to me yesterday, “I don’t like to sit at the round table because I don’t want to speak to anyone.” Spending time—lingering, hanging out—doesn’t happen in that space in a big way. Of course, you could sit there and have a very different time with it, if the area had been a little more cared for in terms of trying to make a space that communicates to people.

Faculty and students are aware and both agree that they can’t live like that because, anyway it’s not law school, it’s not business school, it’s an art school. It is about living and working and being creative and being free and having space to think and pushing the boundaries, and you can’t work inside a prison cell and try to be an artist. I think that is something very clear, but another thing to understand is the anxieties of the administrators, the bureaucrats, the lawyers, and the Board of Trustees. That’s something that needs to be played out. When you walk into the space, your will has been taken away from you, so why would you even think about the fact that even moving the tables around would change your life? So, we moved the tables around, we brought in some different kinds of chairs, we took a little care to make an arrangement with flowers…

BD: …Put the gels on the lights…

RT: …Just to give a little bit of color. It is possible to make it better. And when we make it better, we use it differently. That is something I was hoping would play out. It is almost like the workshop was a “lab.” The idea was for the participants in the workshop to communicate and draw from the people what they think and what their needs are. We conducted formal interviews with people (to sit and feel the different sort of thing), it was more like a performance in that way, really. I was told that there was good information gleaned from those conversations, and I think that we’ll probably make a tape and show it, and people can reflect on that.

Another thing that was interesting too: I talked to Sonny about this idea that we would cook together, and he would cook the recipe the way he would, and I would cook an authentic recipe as well. However, after talking about how the kitchen works, we decided Sonny will cook it. So he made it spicy, to his taste, and people loved it. He was shocked. He said to me, “I didn’t know they could eat food like that.” He never made it because he didn’t believe in it enough.

BD: It would be great if it were made like that all the time.

RT: I told everyone, “Go up to Sonny and tell him that you want your food like that, you want it real, the same way a Thai person would eat it.” That’s what the food is. It’s not watered down, you have to experience it. You gain from the experience, even if it was hard, even if it was spicy, it still tasted good and you enjoyed it and you’ll eat more of it. You grow out of it. I think that’s another layer that is important: that people realize that they have to go to the edge and fi nd out that there’s nothing to be scared of. Similarly, that goes for the people running the school. They’ve got to realize that making art can be dangerous, because we have to go push the limits, but if you don’t let people go there, you’re not going to gain anything from it.

BD: How did you use the Art Institute of Chicago when you went to school here?

RT: Look, you gotta write on a big banner, big headline: “The school, the artists, built that museum.” The school started before the museum. The museum was a branch of the school. Take it back! The museums would have no art without artists.

For me, there was a kind of void, the void of life which actually is much more interesting than the objects themselves. We were standing there looking at African sculpture, which is supposed to be used in rituals, but we’ve never seen those rituals. We just see this object and look at it as an object. In this Western culture you stand there and look at the object and…

BD: …you formalize it.

RT: …and that keeps going. Administrators…are looking at them as some kind of fragile object that needs to be protected from themselves.

I think it comes down to personal space, and those spaces are being shut off by fear. That’s something you need to think and talk and write and read about. Art is really that space where you are able to decide what you want to do, with your own will, and to be free. 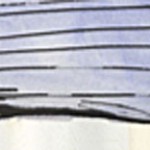 The (Abriged) Sordid History of Recycling in Chicago