Entering the tenebrous Gallery X to see Yong Hyun Chung’s show “Trans” is like stumbling into a private wonderland. The four columns of what seem to be spinning totems of pots, bowls, and vessels subvert their conventional functions as they transport the viewer to a place of self-reflective contemplation.

Entering the tenebrous Gallery X to see Yong Hyun Chung’s show “Trans” is like stumbling into a private wonderland. The four columns of what seem to be spinning totems of pots, bowls, and vessels subvert their conventional functions as they transport the viewer to a place of self-reflective contemplation.

As with traditional pottery, the works bear traces of their maker in not-quite symmetrical form and sporadic abrasions, a result of what Chung refers to as their “improvised” creation. Yet, in these works, the pottery is transformed into the agent, viewer, and receptacle of their thoughtprovoking power.

The hierarchy of composition provokes a religious feeling due to their commanding stature; depending on the position of the viewer, the columns either surround or conspire with each other. Whether this feeling is meant to be one of somber piety or the whimsical veneration of lust and life as in the fountains in Hieronymus Bosch’s “Garden of Earthly Delights” (1504) is left up to the viewer to determine. 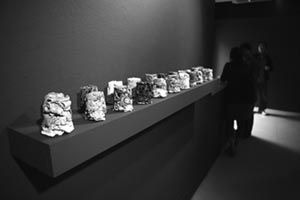 Meditating on the works, one notices subtle distinctions: one column is black and white, one golden, and two are a dark bronze, giving each column the opportunity to become like a Chess Piece, a Sphinx or Golden God figure, a bronze Monument or Statue. In his artist’s statement, Chung asserts that he hopes “to show the real functionality of ceramics” which is “about human interconnectedness and social interaction.” In this sense, he succeeds through this transubstantiation of inanimate pottery into participants and evocations of various aspects of human experience.

Accompanying these thoughtful transformative columns are what appear to be two groups of overturned cups on a shelf in the corner. On closer inspection, they reveal themselves to be heaps of pottery shards. Instead of being pieced together in a mosaic, the fragments have been assembled in a failed attempt to construct an original vessel. The colorful glaze stops in an even line above the bottom of the upturned lip of the “cup,” betraying the fact that these objects are completely contrived. The result is a functionless product, a cup created from negative space emptied of its conventional meaning.

“Trans-” is a Latin word meaning across, beyond, or on the opposite side of: through the looking glass, for example. In terms of shifting perfunctory notions of ceramics to affect a reevaluation not only of ceramics itself, but of human relations, the show is transcendent.

Gallery X is the small, easy to overlook gallery located at 280 Columbus Drive, discreetly nestled between the bustling Ceramics, Performance, and Sculpture Department office and the high security portal between the museum and the school. It features work by students from the School of the Art Institute of Chicago and is open Tuesday through Friday 12:30-5:30 and Saturday 10:00-3:00. Check it out! 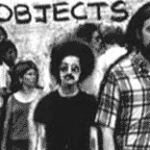 So The Conversation Goes