Adrian Piper at the Smart Museum of Art

“No matter how much I ask my mother to stop buying crackers, cookies, and things, she does anyway, and says it’s for her, even if I always eat it. So I’ve decided to fast,” says the Mythic Being in an eight-minute film clip excerpt from Peter Kennedy’s documentary Other than Art’s Sake, on view in the Smart Museum’s mini-exhibition, Adrian Piper: The Mythic Being. Piper’s character of the Mythic Being has often been interpreted as a symbol of the “threatening” black man; she, a multiracial woman, adopts stereotypically masculine behavior, swaggering and sitting with legs spread, to accompany her Afro wig and fake mustache. Political events of the time, such as the bombing of Cambodia, the Kent State massacre, the women’s movement, and the proliferation of conceptual art shows led Piper to create the persona in order to address current issues and remake herself as an art object.

A case in the center of the gallery displays selections from “The Mythic Being: Village Voice Ads.” Alongside gallery advertisements in the newspaper, a photograph of the Mythic Being “speaks” to the reader via a comics-style thought bubble (incorrectly labeled in the display text as a speech balloon). Each month the ad ran, the same photograph of the Mythic Being was juxtaposed with a different mantra, rendering it nearly nonsensical when taken out of context. By additionally inserting mantras from her own journal, Piper affirms her personal history in an oblique manner.

The Mythic Being project is at its most powerful when Piper combines bold illustration, philosophical text, and photography, as she does in her “Photostat” posters. Some of the posters are introspective, such as “The Mythic Being: A108” (1975), in which the character sits at a typewriter and transcribes an excerpt from Kant on the transcendental unity of apperception. Others are refreshingly assertive. The poster, “Look But Don’t Touch” (1975), for example, makes its point succinctly, as the Mythic Being’s face dominates the composition, authoritatively telling the viewer, “LOOK BUT DON’T TOUCH.”

To supplement the Smart Museum’s “I am the Locus,” the Adrian Piper Research Archive loaned previously unpublished and unexhibited work, including two photographic series of the Mythic Being in Piper’s apartment, dancing and doing yoga. Perhaps these photographs were never exhibited for a reason, for they were the most unconvincing of the exhibition. The description of one image in the series, titled “The Mythic Being: Dancing,” reads: “The Mythic Being dances a precisely choreographed routine to Aretha Franklin’s ‘Respect’.” A sequence of fourteen gelatin silver prints shows the Mythic Being dancing before a window and hanging plants, with full bookshelves to her right. The text label claims that “these largely unexamined performances demonstrate more meditative, playful, and perhaps feminine elements within the Mythic Being project,” but instead, they were disjointed and confusing. The intimate surroundings in these photographs detract from the Mythic Being’s autonomy as alter ego, and abruptly, the viewer is only left with Piper in a bizarre getup.

The exhibition presents a dose of humor in the form of political commentary in “The Mythic Being: Newspaper,” (1973). The photograph documents the performance, “Getting Back,” which consisted of the Mythic Being attacking a white, male stranger (Piper’s friend, David Auerbach) who attempts to strike up a conversation. Because the stranger has no money, the Mythic Being steals his newspaper and runs away. As the only work in the exhibition that addresses racial tension explicitly, “Newspaper” provides a necessary counterpoint for the project’s more philosophical works, demonstrating and summarizing Piper’s method for coming to terms with the self. 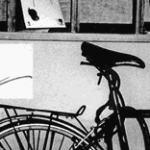