I am quite a classy guy, but I’m also frugal with my food budget. My penury makes me ache to the marrow; I’m constantly hungry, I never feel really satisfied and I envy people who have healthy diets of expensive organic produce. But—and this is a mighty and powerful “but”—I do have a boatload of money in my wallet just waiting to be invested in important investments because of my thriftiness. Below I outline the foundation of my incredible money saving tactics by divulging some of my most important hot spots and hot items for classy, food-related spending:

Both the atmosphere and the fare are truly outstanding at this Wicker Park hot spot. Weekend evenings are a bit crowded for me, but at 3:30 a.m. on a Tuesday, this is my place. A staple in my diet is the hotdog and fries for an unstoppable $2.19. If I dip the fries in mayo I am completely sated by the time I have polished off this sub-$3 meal. As if the scorching prices weren’t singular enough you also get the shiny-eyed little gentleman (who is the picture of vivacity) serving it fresh from the grill as quickly as he possibly can, and for no added cost you can converse with only the finest and loudest intoxicated Puerto Rican girls within a 10-block radius. This establishment is truly a blessing.

I’m a big fan of marketing. I consume most products based on the marketing tactics that they use. I enjoy items that are geared towards my generation; I want bold advertising that confronts me when I reach towards the cooler in the corner store. I don’t want any sissy, demure, pale colors either. I want brilliant primary colors that express the exuberance of today’s youth demographic. I just want my drink to have an exclamation point in the title and the price printed on the can. Rip it, my friends, rip it. Although it isn’t the tastiest beverage in the world (in fact, most people throw words like “gross” around when I give them a taste of the sweet nectar), it does get the job done. With its price tag and monstrous size, this $1 high-powered soda is a very hot item.

Some time last year, I attempted to go to sleep but I had a horrible pain that started in my stomach and spread throughout a very serious area, making urination an awful ordeal. It was 3:30 in the morning and I was worried my appendix was about to burst, so I walked past Roberto Clemente to the hospital and told them I thought my appendix was going to explode. The woman at the desk looked at me, apparently very bored with my statement, and merely pointed in a direction. I followed her finger, repeated what I thought was a serious issue to a new receptionist, and was told to go into a room and sit down.

A chirpy nurse came in and asked me a series of questions about my ailment, and then told me my appendix wasn’t about to burst because the appendix is on the right side and I was hurting on the left side. I was very relieved because that evening I had made a trip to Alex’s Pizza and I was worried that my ingestion of too many $1.50 super-slices had caused my appendix to become an unruly little guy. But that wasn’t the case; I actually had a urinary tract infection which is why my stomach was hurting and it felt like someone had stuck pine needles in my urethra. Alex’s Pizza is truly a diamond floating in a vat of stool. At $1.50 the super-slices they offer are second to none in affordability and excellence. If I were to take someone I really loved on a date, this is where we would go before the opera.

I enjoy it when crappy American products go through the transatlantic transfiguration and wind up on other continents as emissaries of American classiness. KFC is the second largest fast food chain in the world and this is apparently because of its death-grip on Southeast Asia. A friend of mine confirmed this fact as she recently traveled back to her native Vietnam and said that she ate much more fried chicken there than at any other time in her life. That got me thinking, and I can’t even imagine how incredible the prices in those KFCs would be. In a country with an average annual per capita income of $2,700, the fast food has to be cheap.

I’m assuming figures along the lines of $1 for the eight-piece extra crispy bucket. I’m quite a fan of the extra crispy bucket; I used to eat a lot of KFC. I started with KFC then switched to Chicken Planet after a brief stint at Church’s Chicken. Now I buy frozen fried chicken at Aldi. Aldi is apparently a normal grocery store in Europe but here it’s an entirely different entity. I love Aldi. It is by far the cheapest, best shopping experience you can have in America. A personal favorite item of mine is the ground turkey, which never fails to disappoint at 79 cents a pound.

I’m not a very political guy. I try to stay out of most political debates, I rarely watch political television or radio programs, and I didn’t vote. I told people I didn’t vote because I’m from Nebraska and my state is a conservative state and I probably trailed off at that point and told someone I had to go to the bathroom and then just left. I actually didn’t vote because I don’t really care. Whenever I watch politics it looks like the same person, regardless of his or her titular party affiliation. I should vote because it is my civil duty and we are the luckiest people in the world to have such an honest electoral system and so on. But it just doesn’t interest me.

I’m a simple person with no real interest groups to support, and all white people look the same anyways so I don’t feel the need to toss any of my verbal doo-doo on the collective poop pile. I would vote, though, if there were lobbyists from the Chiu Quon Bakery trying to raise the prices of their steamed bean paste buns. Any sort of price increase on those bad boys would have me writing a petition, calling Mayor Daley, even marching in front of the post office, giving a massive speech on stinginess to an audience of myself. If need be I would become a pastry patriot, willing to sacrifice life and limb for the pursuit of liberty, justice and those delicious little coconut rolls. I can honestly say that’s what I truly believe: confections and treats, Amen.

Students and faculty have a go at logos 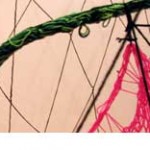