On March 10, an eighth-grader on a class visit to see Robert Rauschenberg: Combines, currently on view at the Met, removed his slight-chewed Bubblelicious bubblegum from his mouth and silently stuck it onto one of the works. It wasn’t until after the class returned to school and the boy was overheard bragging to his friends that the teacher learned of the transgression and phoned the museum. Museum officials cordoned off the area around Rauschenberg’s combine “Collection” (1954) and conservators searched for nearly an hour for the well-hidden gum.

“Apparently, the boy was influenced by all of the DIA [Detroit Institute of Art] press,” Kary Fitzpatrick, assistant curator of 19th-century, modern, and contemporary art, told the New York Times. In February, a 12-year-old boy stuck his Wrigley’s Extra Polar Ice to Helen Frankenthaler’s 1963 abstract painting “The Bay” while visiting the Detroit Institute of Art with his school. Conservators in Detroit are analyzing the chemical composition of the gum to determine the proper solvent to use to clean the painting.

“Museums establish rules and regulations to protect their collections but, occasionally, those rules are broken. The artwork and visitors who come to see the work suffer as a result of the blatant disregard of certain restrictions,” said Fitzpatrick. Met conservators are working closely with DIA conservators to restore “Collection.” “It is much more difficult from a conservation point-of-view when you are working with ephemeral materials favored by modern and contemporary artists,” Fitzpatrick explained. “Rauschenberg’s combines are complex in structure and in the variety of media used.”

A James Monroe Middle School spokesperson confirmed that the student has been reprimanded and will be counseled on the seriousness of his misbehavior. Fake or Real? Answers HERE. 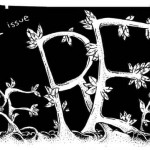