Smelling your peers in line is now optional

Because of the recent successful debut of online enrollment, most students won’t be standing in painfully long lines on the seventh floor of the Sharp Building to enroll in classes anymore.

Last November, only four or five grad students showed up at the registrar’s office to sign up for classes during the advance registration period, and come advance registration for the fall semester, it’s unlikely that any undergrads will show up, either. Because of the recent successful debut of online enrollment, most students won’t be standing in painfully long lines on the seventh floor of the Sharp Building to enroll in classes anymore. Currently, all graduate and undergraduate students who have finished their first-year requirements are eligible for online enrollment through the PeopleSoft Self-Service feature under the “Tools” tab of the SAIC portal (students still in the First Year Program will be eligible to register online as of March 1).

Self-Service uses a third-generation programming language called COBOL, which stands for Common Business Oriented Language. Late in 1959, the US government established COBOL so that the government would be using the exact same programming language all throughout the country. Since then it has moved out of the military and become the norm in business–a staple for any major company and administration.

Self-Service, which was brought up live in mid-August, allows students to get an unofficial transcript, look at their grades, check the balance on their account, or view their schedules–past or present. Many students are already familiar with checking their grades or schedules online. As Director of Administrative Applications Chas Scidmore pointed out, all but one percent of grad students registered for classes online last semester, and 75 percent of undergrads, have already accessed Self-Service in anticipation of the next enrollment semester.

In addition, during the registration period, faculty and staff will be able to use PIN-type codes called permission numbers to grant students permission to enroll online for prerequisites and classes, replacing a teacher or academic advisor’s signature on a registration form.

“There are some students who feel that the interface is a little dated,” Scidmore said with regards to corporate websites like amazon.com and their shopping-cart style interface, but with the Portal’s 98 percent student participation rate, it’s likely that most students think it’s a step in the right direction. 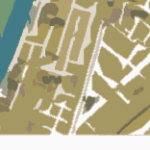 An Incomplete Map of Everything