In December, the U.S. Joint Task Force released a statement that 84 “enemy combatants” were voluntarily fasting to protest their alleged inhumane treatment and indefinite imprisonment, a technique the government claims “is consistent with al Qaeda training.

A place or state of restraint or confinement

In December, the U.S. Joint Task Force released a statement that 84 “enemy combatants” were voluntarily fasting to protest their alleged inhumane treatment and indefinite imprisonment, a technique the government claims “is consistent with al Qaeda training.” With the terrorist group most recently claiming responsibility for a suicide bombing at the Iraq Foreign ministry, killing 29 people on January 9, it appears highly unlikely the organization has resorted to non-violent tactics.

Further complicating the “al Qaeda training” claim is the Bush Administration’s demand that Iran release journalist Akbar Ganji, imprisoned in his own country since 2000, and who has been on a hunger strike since June 2005. In a press release on the White House’s website, the administration expressed concern over the Iranian government’s refusing Ganji access to his family, medicines, or legal representation. Meanwhile in the Caribbean, Guantanamo Bay detainees, many of whom have been incarcerated for over three years, and none of whom have been convicted of any crime, are not permitted to visit with family members nor receive medical attention outside the camp. While they await their unknown fates, Congress has passed, and President Bush signed, a law that limits their ability to challenge their detentions.

A place or state of neglect or oblivion

The New York Times’s exposure of the Bush Administration’s domestic spying program has forced politicians to choose between mantras; either we must accept that the war against terror changed the commandments of combat altogether, or that the heart of this democracy lies within the tenets of the Constitution and the civil liberties it safeguards. Are the hours it might take to obtain a warrant, possibly a matter of life and death, worth nullifying the Fourth Amendment (and the 1978 Foreign Intelligence Service Act), and thus other rights in its midst? Even though John Cornyn (R-TX) may be correct in saying that “none of your civil liberties matter much after you’re dead,” here’s hoping they don’t linger in a state of neglect for too long while we’re alive either.

An abode of souls that are barred from heaven

After 800 years, the Catholic Church is doing away with the waiting room to heaven that, since the 13th century, has held children who died before being baptized, souls who expired prior to Jesus’ death, and, according to the more open-minded, certain other worthy pagans and Jews. Although limbo has been a favorite setting of poets and writers since Dante, the idea of an in-between place has lost favor amongst the brethren for almost a century now. As Catholicism spreads through Africa, where infant mortality rates are as high as 20% in some countries, Pope Benedict and his clergy have decided to amend the realms of afterlife. This is great news for deceased children, who’ll be shuttled straight to heaven, although it may mean warmer climes for some who hoped to linger in the waiting room a little longer. 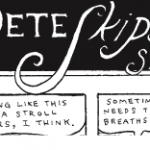