F News has taken a stab at summarizing a handful of potentially grand, quirky, and inspiring art events that will occur in the Chicago area over the month of November.

Sifting through the plethora of calendars, articles, recommendations, and printed announcements for art events taking place in Chicago in the upcoming weeks can be endless. F News, therefore, has taken a stab at summarizing a handful of potentially grand, quirky, and inspiring art events that will occur in the Chicago area over the month of November.

Over the next two years, a construction barrier will surround the block created by State, Washington, Dearborn, and Randolph Streets. Local artists Michael Genovese, Matthew Hoffman and Chris Silva are in the midst of an initiative to turn the construction into an art piece.

According to the posting forum Craigslist, enthusiastic volunteers are needed to keep the low-budget project on schedule. Work commenced on October 22 at a space just south of the loop and will continue until November 22. This project is specifically seeking out art students to work on the mural, especially if they are interested in the concept of the project.

Craigslist said, the painting style will be “very clean, graphic and bold” and cover an area that is 12 f eet high 350 feet long.
Work on the project, themed “You Are Beautiful,” will be done from 10 a.m. to midnight every day of the week except Thursdays.

For more information on the project and the individual artists, please see:
http://you-are-beautiful.com
Chris Silva
Mathew Hoffman
Genovese
If you are interested in participating, send an email to:
[email protected]

The Ninth Annual First Nations Film and Video Festival will take place from November 14 to November 20. It will be presented by the American Indian Center of Chicago and the festival material will be screened at various venues across metropolitan Chicago and its suburbs.

The term “Native American,” according to the festival, includes all of the indigenous peoples of the Americas—North American Indian, Alaskan Native and Native Hawaiian people as well as people from the indigenous tribes of Central and South America. The event will commence with a screening at 7:30 p.m. at the Main Theater of the American Indian Center of Chicago, located at 1630 W. Wilson. For more information you can also call 773-275-5871.

NASA’s first artist-in-residence, Laurie Anderson, will visit the Art Institute of Chicago’s Fullerton Hall on November 20, at 7 p.m. This promises to be a unique performance that takes on concepts of space, time, war, and consumerism in the course of one hour.

NASA invited Anderson to utilize a $20,000 commission to freely create a range of works over two years. She visited the Space Telescope Science Institute, the Johnson Space Center, and NASA Ames Research Center and the Jet Propulsion Laboratory in order to research and prepare her work.
One of those works is performed on the violin and keyboard. Anderson presents her work and research through travelogue, personal theory, and history, under the title “The End of the Moon.” This is the opportunity to see ideas of spirituality, the space race, and the stars through the perspective of a single woman.

Beyond Green: Toward a Sustainable Art

On November 15, from 5:30-9:00 p.m., an event titled “Chicago Green Drinks” will take place at the Jefferson Tap & Grill (325 N. Jefferson). It is hosted together with Beyond Green: Toward a Sustainable Art, an exhibit at the Smart Museum of Art. For just two dollars, attendees will have the chance to explore and learn about sustainability and environmental issues, with special attention on the kinds of projects that are being designed in the area in order to address them.

A panel and exhibit on art and sustainability will take place from 7:00–8:00pm. in conjunction with the Beyond Green: Toward a Sustainable Art exhibit at the Smart Museum of Art. Panelists include Tiffany Holmes, Sabrina Raaf, and Nils Norman. Holmes is an assistant professor at SAIC and multimedia installation artist. By imaging the movement of bodies—human, animal and molecular—her work creates a visual landscape of that motion. Sabrina Raaf is a Chicago-based artist who does experimental work in sculpture and photography. Nils Norman is an instructor and visiting artist at the University of Chicago. His work is in the Beyond Green exhibit. Norman’s work envisions future uses of urban space with a focus on community-based initiatives.

An important conceptual artist who produced work in the 1970s will be exhibiting work at the Rhona Hoffman Gallery. The artist is Gordon Matta-Clark (1943-1978) and his art consists of films, drawings, and Cibachromes, all of which tackle conceptual material that is still highly relevant to viewers today.
Matta-Clark was important in the activity and expansion of the SoHo art scene in New York during the 1970s, where he studied and worked with ideas of energy flow in structures, language, humor, politics, and graffiti.
The Whitney Museum of American Art is scheduled to have a retrospective of his work in 2007. The show is already underway and will run through November 12. Gallery hours are Tuesday-Friday, 10:00 am-5:30 pm, Saturday 11:00 am-5:30 pm.

At this so-called “Cannes for Kids” event, Chicagoans will have the chance to explore their more innocent side through this festival’s 200 films. The Chicago International Children’s Film Festival (CICFF) is an annual, competitive event, and the only Academy-qualifying children’s festival in the world.
From October 27 to November 6, a variety of material will screen, including live-action and animated features and shorts, documentaries and television series, and child-produced work. The jury is made up of both adults and children.

Works included in this year’s festival have been submitted from 40 countries. 150 directors from around the world will meet audiences and hold post-screening discussions. The events are presented by Facets Multi-Media Inc.
For more information go to: www.cicff.org

The University of Illinois at Chicago has an ongoing project installed on its campus, in front of Gallery 400. Titled “Temporary Allegiance,” the work consists of a 25-foot flagpole that supports a flag from a different artist every week. Philip von Zweck ideas founded the space, as he hopes to give the community opportunity for self-expression. Anyone interested is welcome to sign up to fly their own individual flag. The installation will remain up through December.The gallery is located at 1240 W Harrison St.

The 24th Chicago Lesbian and Gay International Film Festival and the world’s second-oldest lesbian and gay film festival will take place from November 3-12 this year. The films screened include a wide range of subjects and characters, such as coming-of-age gay rowers, an Iranian lesbian seeking asylum in Germany, a gay man with comedic romantic endeavors, members of a support group dealing with homosexuality and Orthodox Judaism, and queer vampires.

The poets are convening from California, Arizona, Pennsylvania, Alabama, Wisconsin and Illinois to address the work of women visual artists at ARC. What’s not to love: using poetic expression to evoke visual images that are inspired by visual images. Beth Shadur is the curator for the Poetic Dialogue. For a list of poets and more information, visit the gallery’s website: http://www.arcgallery.org 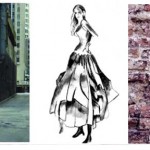 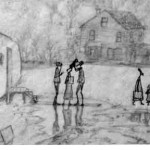