Birds have the sniffles, and we’re fresh out of tissues

Shouldn’t every political cartoonist in the U.S. be drawing pictures of birds with little thermometers in their beaks by now? Shouldn’t the op ed section of the Tribune be cluttered with bombastic, call-in-radio-show-host type commentaries about why Avian Influenza isn’t being taken seriously? Shouldn’t shut-in art students who go out of their way to be uninvolved with current events and the world at large be making bleeding-heart pieces exploiting the idea of virus-riddled corpses by now?

“The bird flu,” virus subtype known as H5N1, reappeared in Asia in 2003 and has been steadily killing birds and other animals, including people, since. Most recently, a 48-year-old Thai farmer died of bird flu (most of the human cases have been farmers and their children, who live around poultry). The flu has spread to Vietnam, Cambodia, Russia, and Europe. 61 Asians have died as a result so far, and many non-human cases in Europe have been reported.
And I can’t help but wonder, if this strain of virus had originated in Canada or maybe some U.S. territory, our nightly news and morning papers might be expressing some concerns about a pandemic instead of saturating Chicago with incessant Sox coverage.

If this overseas pandemic seemed as real to SAIC as the Microsoft Word-crashing, term-paper losing, “Are You Surprised” virus, maybe there would be an increase in school-wide concern. Maybe if one imagined oneself as an ephemeral term paper on Xiu Xiu, and bird flu as a computer virus that doesn’t care about what you have to say about pop music, there might be a higher level of immediacy around the studios here.

Not that we should run for the hills just yet, but we should be aware that health ministers from different European Union nations met to discuss what to do if the virus shifts from birds to humans. It would be a human flu pandemic not unlike the Spanish flu, which infected over a quarter of the U.S. population and one fifth of the world’s population.

But that was in 1918, and we’ve had ninety years since then to put mechanisms in place to help deal with such scenarios. As a country, we’ve had plenty of time to devote resources to natural disaster, but our government tends to favor research of the anthrax-preventing, anti-bio-terrorist kit-making variety (read: duct tape and plastic sheets).

But how can any art student approach this without sounding hackneyed? Who wants to listen to some snot-nosed artist with rich parents attack government and mainstream media in typical counter-culture rhetoric? How many times has some scrawny art student with an outlet like a school newspaper made concern come off as trendy contrarianism?

And what if the U.S. is never infected with bird flu? I’d be embarrassed to fuss over a pandemic that never came to pass. People respect a doomsayer even less than an art student pointing blame at “the man.”

So to my fellow art students who can’t figure out what to do regarding bird flu awareness, you have my empathy, and remember to include FEMA in any argument you have involving American unreadiness.

Uncategorized Birds have the sniffles, and we’re fresh out of tissues 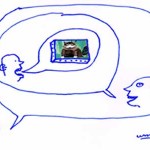