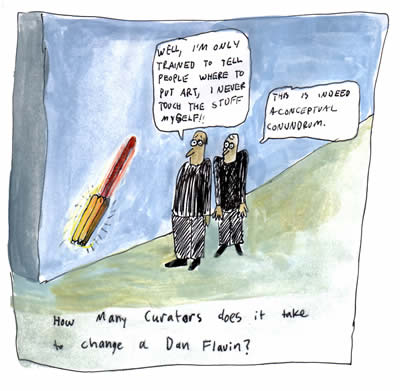 The connecting point for these two artists is their use of electric light. Not natural light or plain old light bulb light, but modern light. Flavin’s choice is fluorescent, while Sonnier’s is neon. Both artist’s installations make use of the stigmas attached to these materials. Florescent, means work, means dull, means headache and eyestrain. Neon means fun, diner, striptease, barbershop, ice cream shop.

Keith Sonnier draws with light; the lines become form and alter space. In his assemblages he uses neon and electric lighting along with eccentric found objects such as car parts. Some of the softer qualities seen in Sonnier’s creations are juxtaposed against the earthly, worldly and sullen detritus of everyday and industrial living. Sonnier’s compositions call up the aesthetic of Ed Keinholz’s assemblage installations, and shares an affinity with Mario Merz’s neon “igloos.” Beginning with using neon, to draw in space, he takes it further by letting the cords and transformers show and uses them as part of the spatial drawing.

Flavin takes the intensity of fluorescent light and ratchets it up until it is blinding and physically altering. This is particularly true in a piece like “untitled (to Jon and Ron Greenberg)” (1972-3), where you walk into and through it, and are fully immersed in an environment of intense color.

The installation of Flavin’s work at the Museum of Contemporary Art transports the viewer to another world. The way the lights so directly affect all the viewers’ senses results in all extraneous concerns melting away. One becomes detached from the day’s experiences. Almost like awaking from a long nap and feeling that events which occurred only hours before really took place days before. This is how Flavin takes the viewer to “another world.”

In the eerie green projected by the massive “untitled (to you, Heiner, with admiration and affection)” (1973), the sky appears lavender and slowly changes color as the city’s own Fluorescent and neon lights blink and click on. “To you, Heiner…” runs the length of the main upper level gallery. Its constant glow is a beacon to those on the outside.

The Flavin retro is its own place, a place of beauty and light, but also a place of coldness, starkness and pain. Color is a physical thing. And it’s purples, blues, greens and pinks are undeniably lovely, even to the harshest of hearts. At the same time the light fixtures are plane and industrial, the walls bare, and the naked bulbs hurt the eyes.

Sonnier’s pieces also glow and radiate with a certain beauty. The neon plays off all the different surfaces that make up each work, and the space that surrounds. Sonnier does not over do it. He is careful to not cross the line in his wild experiments.

Flavin is very careful and very controlled, removed, cold; like an architect. Any instances that contained experiment, chance or freeness, have long been smoothed away, removed, and refined out of the work. Earlier pieces by Flavin, particularly the “icons”-a series of eight assemblages begun by Flavin in 1961, have the rough edges, uncertainty, and spontaneity of Sonnier. For better or worse, Flavin has taken these qualities out of his work as he developed something new.

Although different, the works of both artists carry a unique emotional resonance. In Sonnier’s personal “Depose I” (1996), a small balloon cloud figure is crushed against the wall by a strip of neon. This piece is known as a reference to Sonnier’s divorce. And in any case, it packs a powerful emotional wallop with tender and delicate figure crushed by the burning light.

After staring into the works, their cool and mechanical designs seem to speak of emotional distance itself. But with the dedications nearly all his work bare in the titles, and the loving way he dealt with his subjects, as evidenced by supplementary sketches studies and correspondences, we realize that all along, Flavin was very personally invested in what he was doing.

The real beauty and mastery of Dan Flavin’s work comes in the vast expanses of bare walls which show the colors of different pieces gradating into one another. It is the place where separate walls share intersecting shapes and contrasting planes. They drink out of the picture plane like the Impressionist’s late Water Lilies.

That said, there are some problems with his work as well. Flavin’s work alters you, your vision and you perception, and in a negative way. You could almost see psychiatrists conducting experiments on visitors to this exhibition to find out the effect dynamic lighting has on humans. In the midst of it, it is impossible to think or concentrate, you have no patience. You become irritable and disoriented.

Your eyes can’t adjust, and you almost start to have visual hallucinations after prolonged exposure. All you senses are assaulted and over loaded. This has the potential to be a deeply spiritual, almost religious experience, but also a disturbing one as well. Logistically, it makes it near impossible to pass from the pure light rooms into the galleries containing documents, earlier works and works on paper. You get headache and you start to feel like you are going blind. This is because viewing this work is predicated on breaking a rule a rule you grow up with: don’t stare at the lights, honey.

Sonnier is also not without fault. The most troubling is the “Tri-Parrish” (1988) triptych. Very much of its time, it fails at doing anything but looking like set decoration from “The Max” from “Saved by the Bell” or The Hard Rock Café.

What is most interesting in looking at these two artists is how they took the new material, electric light, and used it so and innovatively and in such varied ways. Boiled down, you could say Flavin’s work is mainly about modern light in an architectural space, how it moves, changes and alters it, and the viewer. And also how it highlights it. Sonnier’s work is primarily concerned with light as a sculptural and linear tool, and how it reacts with other objects and surfaces and the area in which the work is displayed as a whole.

While Sonnier seems more immediately personal, Flavin is as well, in his own minimalist way. 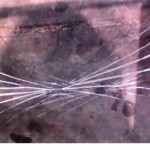