UFVA exhibition shows the risks and rewards of technology-driven art

“Pet the Video,” an interactive program by Ellen Wetmore, consists of a touch screen where the viewer uses a finger to uncover one picture behind another picture. It took all of 30 seconds to get the gimmick and uncover the hidden picture. I must admit I approached the piece as I do most computer puzzles, as a task to complete or a riddle to solve. While I was inspecting this piece, a woman came up to the screen and said with relief “Oh good, something tactile!”

The “Oh good, something tactile!” exclamation is a metaphor for the issue facing all artists who incorporate new media. One must overcome the distance between the viewer and the object created by the viewer’s expectation of function. The media must be relevant to the artist’s message, or the work must be purposefully mindful of the medium’s culture of “intended use.” Artists are exploring the new medium’s specificities and developing the “rules” for those artists that follow; just as photography and film have to address their roots, computer-based pieces have to address the viewer’s expectations of the medium in order to connect with the viewer.

For example, “Pieces of Herself,” a drag-and-drop “game” created by Juliet Davis, purportedly explored issues of feminine identity in the home and workplace. Yet when encountered with a format typically used for games, coupled with a comic graphic style, the piece comes off as ironic. As you move the mouse around finding hidden things that form and inform the feminine psyche you can’t help but be amused. If the piece is aimed at irony (i.e., serious subject set against laughable interface), then it succeeds. But as such, it comes off as a joke on the problems of identity, because the drag-and-drop game medium was inappropriately handled by the artist.

Several of the works in the show dealt seriously with the expectations of their medium and accomplished affecting art. For instance, Annette Barbier and Drew Browning’s “Path of the Dragon,” a navigable CG world, was an unpretentious gem. Its lavish, pastel Asian landscapes and roaming dragons complemented the fantastic nature of the angular, pixilated world and used it to full advantage. Mara Alper’s video piece “Toro,” a projection of a bullfight framed on a bull’s skull, was engrossing, for it showed the festivity and excitement that can accompany the fights. That one was watching this unfold on the skull of the deceased animal provides a powerful counterpoint to the excitement of the fight. The result is a nuanced reminder of the cost of this type of brutal entertainment. The effect was accomplished simply and directly. In New Media, this is the task: to be realistic in the expectations of what a medium can accomplish, and to accommodate the viewer’s perspective of that medium. 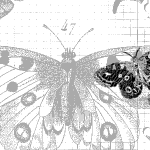