How the health are you??

Find out how healthy SAIC students really are by Simon Hunt Last spring, SAIC Health Services sent out an email with the subject, “How The Health Are You?” The message invited students to participate in a newly developed online health survey. With the promise of full confidentiality and the chance to win a free iPod …

Find out how healthy SAIC students really are

Last spring, SAIC Health Services sent out an email with the subject, “How The Health Are You?” The message invited students to participate in a newly developed online health survey. With the promise of full confidentiality and the chance to win a free iPod Shuffle, the survey drew in 593 respondents (47% of the student body).

Linda Pas, Director of Health Services, explains that this survey is a first for SAIC. While health-oriented surveys have been used in the past, this was “the first to have a social norming component,” a portion of the survey dedicated to gaining an “impression of peer usage. The questions are aimed at a comprehensive understanding of the whole person.” The survey “highlighted such areas as credit, debt, access to and believability of health information, volunteerism, impediments to academic performance, hours worked, sexual practice, and mental and physical health.”

Such a survey is inherently imperfect. Because the survey was voluntary, a few factors may skew the results. For example, a majority of respondents (71.1%) were over the age of 21, atypical for a college setting, and a large number of survey-takers were graduate students or professionals (26.8%). This balance of students could affect statistics involving perceptions of other students’ behavior.

The wide differences between actual and perceived usage can illuminate aspects of the school’s cultural climate. For example, perceived daily cigarette usage was 77.8%, 65.5% higher than actual usage. An attempt to enter or leave any of the buildings on campus during normal hours will show why this statistic is so far off: breaching the phalanx of smokers that cluster around building entrances every day can easily give you the feeling that 99% of the school smokes, and that they do it to look cool. On the other hand, the wide discrepancy between actual and perceived daily marijuana smokers is more puzzling. Maybe people think that so many students smoke pot every day because their art seems to be weed-influenced, or because of all of the kids walking around with 3-day beards, talking with a kind of affected dudespeak. Perhaps there really are more daily users than the reported 2.2%; they just never got around to taking the long online health survey.

Despite this, the survey results may provide us with a greater understanding of our school community. The questions were comprehensive, ranging from student housing, how much they weigh and what they eat, to questions that revealed statistics that should concern students and school officials alike: the relative infrequency of birth control during sex, reports of severe depression and attempted suicide, and occurrences of violence.

These results have already prompted discussions with Student Affairs and other departments regarding how to address the issues with students. “When students were asked about sources and believability of health information, they ranked ‘school health care providers’ and ‘health educators’ highest, and over 50% of students reported ‘faculty’” as a source of reliable health information, said Pas.

The survey was developed between 1989-1999 by the American College Health Association, a national organization comprised of over 900 institutions. Last year, more than 47,000 students in 274 schools nationwide participated in the survey. The ACHA interprets information from the Centers for Disease Control, promotes research, introduces student health awareness campaigns, and acts as an advocate for universities within the United States.

The statistics featured on the following pages are merely a small sampling of the survey’s results. For more information on the survey and its findings, see the Health Services website.

82.7% of the student body does not inline skate

24.1% of students use sunscreen daily

I failed/dropped my class because:

At parties, or when going out:

31.3% alternated between alcoholic and non-alcoholic drinks

The last time students partied/socialized they had:

number of times students had 5 or more drinks in a sitting in the last two weeks:

36.7% of students who drank alcohol in the last school year did something they later regretted as a result of their drinking. 25% forgot where they were or what they had done. 18.8% were physically injured.

In the last year:

19.4% have been in an emotionally abusive relationship

6.9% have been physically assaulted (non-sexually)

6.6% have been in a physical fight

6.2% have had verbal threats for sex against their will

In the last school year:

19% had no sexual partner

Used a condom the last time they had sex:

About 7 students (or 1.9% of female respondents who have had vaginal sex in the past year) experienced an unintentional pregnancy in the past school year.

Uncategorized How the health are you??
« Previous Story 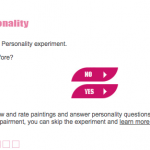 What your taste in art says about your personality

First hand account of life in the Palestinian territories