There is art and then there is the art world, James Yood firmly stated at the beginning of the Evening Salon with Jeff Koons. The art world was definitely buzzing for hours leading up to this event in which artist Jeff Koons, critic and SAIC Adjunct Professor in Art History, Theory and Criticism James Yood, and art collector Stefan Edlis would sit on a panel discussion together.

There is art and then there is the art world, James Yood firmly stated at the beginning of the Evening Salon with Jeff Koons. The art world was definitely buzzing for hours leading up to this event in which artist Jeff Koons, critic and SAIC Adjunct Professor in Art History, Theory and Criticism James Yood, and art collector Stefan Edlis would sit on a panel discussion together. Only twenty-four hours earlier an email went out to all SAIC students informing them to RSVP immediately in order to attend the discussion because space is limited. Hours before the panel, the temperature reached 70 degrees, causing a wave of spring fever amongst students who around 4 p.m. trickled out of class and were blocking the sidewalk in front of 112. Everybody was talking. You going to Koons? Are you on the list? To make matters more exciting, Karim Rashid, perhaps Koons equivalent in the design world, was speaking across the street at Columbus just a couple of hours before Koons. It felt like a night of bar hopping with students going from one lecture and then hoping to get into the next. By the time Rashid’s lecture ended, the 70-degree day turned into a torrential downpour, but being in the heart of a storm only increased the excitement level.

After begging to get in as though the Michigan Ballroom were a hot, new club, the vibe inside was on. The room was full of a who’s who in the Chicago art scene, with gallery dealers, collectors and museum donors all mingling with the chosen few of students. Local art enthusiast Dan Davis whispered to me, I was in the bathroom with Jeff Koons and we had a conversation. Oooh, sexy, I replied. But when Lisa Wainwright stepped up to the podium to introduce the panelists, the packed Michigan Ballroom fell immediately silent. Koons may not be a household name, but in the art world he is the equivalent to Jennifer Aniston.

The purpose of the panel was to show how Koons, and really any artist, makes work in the context of the art world. Yood discussed the five players in the art world: artist, dealer, collector, critic and curator. He praised art dealers, whom he believes are the least appreciated in the five-point formula. Koons referred to the collector as the person who is responsible for maintaining the work of art but then added, art is really free, once you view it you can carry it in your heart, always. A nice sentiment from an artist whose work sells for millions. All three panelists were hilarious, with Edlis – who must be in his 70s – saying things like, You want me to talk about boobs?

Wainwright brought up the idea of Wunderkammern relating the work and the collection practice to a cabinet of eclectic treasures. Edlis steered the conversation away from this idea, saying that it’s a stretch to call his collection a Wunderkammern. But he did turn to Koons and say, I look at your work as treasures. Yood teaches his students in his class Modernism and Post-Modernism that Koons is the poster child for post-modernism. Although there were probably some people in the audience hating on Koons, constantly garnering a reaction proves the success of his work. Perhaps it is because he started out as a commodities broker on Wall Street, or because he seems obsessed with self-promotion (in the late ’80s he took out ads in four major magazines that posed himself in celebrity shots.) Others criticize his work for being pornographic after he made a billboard of himself having sex with his ex-wife, Italian porn-star Cicolina, for a movie called Made in Heaven, which never actually got made. Whatever it is there is no question [that] it is a lusty, busty picture.

At the last moment he might have even won over those who don’t care for him. As one student asked him how he had the money to make his work, Wainwright said that there is no more time for questions. Koons interrupted, let me answer this one. He explained how working on Wall Street allowed him to have the means to be an artist and put himself independent of the collector. He explained how he wanted to grab the ball and run with it. He said that so many struggling artists will make excuses why not to take the ball. But if you really want to be an artist you will get the ball. The crowd burst into applause. 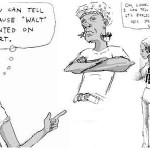 Efcetera: A message from the editors