Whether you are currently building your art collection, or just dream about having one, a Takashi Murakami limited edition lithograph would be an appropriate addition. 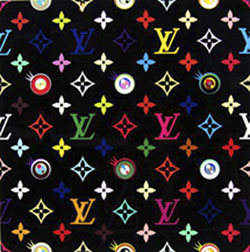 Whether you are currently building your art collection, or just dream about having one, a Takashi Murakami limited edition lithograph would be an appropriate addition. Museum Works Galleries in association with GEN ART had a one-night-only opening in Chicago’s Gold Coast of Murakami’s prints. Museum Works Galleries, located in New York City, Aspen, and Park City–where artwork is bought by Robert Redford and the Sundance Film Festival elite–will be opening up shop in Chicago later this year. 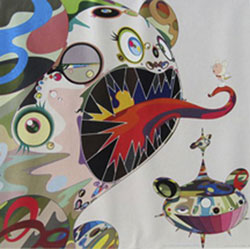 Hanging Murakami’s on the walls is a great choice for a first show. Murakami’s work is always a whimsical pleasure. The Japanese pop artist, who is often described as a present-day Andy Warhol, obtained superstardom after his collaboration with Marc Jacobs for Louis Vuitton handbags a couple of years ago. Artforum’s coverage of the 2003 Venice Biennale pictured a street vendor selling Vuitton knockoffs on the cover of the September 2003 issue with an article commenting on the ubiquitous bags.

The lithographs in this show combine Japanese anime with other aspects of Pop culture. A charming character named DOB, with Mickey Mouse ears, floats around with smiley-faced flowers. In “Jellyfish,” a giant head with colorful misplaced eyeballs, sits upon a tiny body in a field of happy, psychedelic flowers against a checkerboard backdrop. Murakami creates desire. The craving to own a Murakami, whether a lithograph or a handbag, is perhaps his greatest commentary on Pop culture. 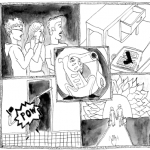 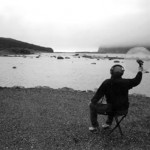