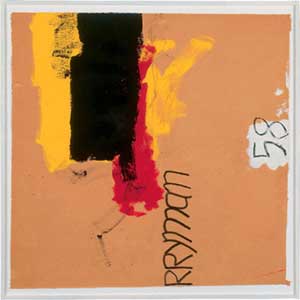 Robert Ryman’s mature works are achievements of endurance. Since the mid-fifties, he has slowly experimented with painting directed outside the bounds of illusionistic depiction, countering Abstract Expressionist tenets of push-pull composition, atmospheric effect, and virtual space. Ryman’s more literal practice of stressing materials as materials has continued to the present.

This fall, the Art Institute and Rhona Hoffman Gallery offered a look at classic Ryman works that emphasize the painting’s support; the canvas or “stage” on which things happen rather than the place which depicted events appear to be happening. Ryman did not just magically conjure such achievements, however, and his current Arts Club of Chicago exhibition takes us through his journey to maturity through 28 works on paper from 1957 to 1966.

If a painter like Cy Twombly worked to achieve personal expression without image, then Ryman works to paint something with neither image nor expression. Actually, what is left are paint, paper, and pencil lead, the sparse starting points for Ryman’s impending forty-year virtuoso performance. In this Arts Club show, you feel Ryman struggling to use an Abstract Expressionist painting vocabulary to erase illusionism, moving the materials of painting to the forefront. Ryman takes up the grid, the idea of layering color, and the painterly brush stroke, making them vehicles for painting without illusion.

One small drawing, an untitled work from 1958, no. 8 on the checklist, consists simply of a few blocks of cream-colored oil paint. The paint bleeds into the paper, leaving a pale brown film around the edges of the paint. Ryman seemingly did not like the atmospheric quality of the oily film. In the next work, no. 9, you see his solution to the problem. Instead of using regular paper, he makes the same blocks of paint on a piece of Mylar. This time, the paint does not bleed but sits there on the paper, a symbol for nothing other than itself.

Ryman’s ability to fluidly work out self-proposed problems is apparent at many points during the exhibition. In certain works, Ryman layers color without allowing the struggle between figure and ground that occurs in gestural abstraction. The work, “Wedding Picture August 19,” 1961, features multiple layers of dingy greens, light blues, and creamy whites, but the layers stay independent from each other; the colors do not struggle for dominance.

Ryman, along with Frank Stella, is often seen as a forerunner to Minimalism and the debate over aesthetics and truth in painting which has ensued ever since. Whichever side one takes in such a debate, Ryman’s work continues to dazzle in terms of making a viewer look closely at how a painting works, how an image can be dismantled, and how paint can to a certain degree be itself again.

Sowing at The Arts Club of Chicago; through April 1 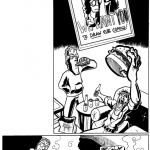 Holy Shit I Made A Comic Book