In the fall of 2003 I showed up to SAIC. I was new to grad school after running loose in the professional world for 11 years and spanking new to Chicago. I had a sense I was in the right place when I had homework before even attending my first class.

In the fall of 2003 I showed up to SAIC. I was new to grad school after running loose in the professional world for 11 years and spanking new to Chicago. I had a sense I was in the right place when I had homework before even attending my first class. The professor of my Interior Architecture seminar showed up at orientation and presented me with a reading list and the Chicago Metropolis 2020 Plan. The 2020 plan is an index of observations by the Commercial Club on ways which life must be improved for Chicagoans by the year 2020 in order for the area to remain relevant in a global economy. But, the plan is dry. It’s a stack of picture-less PDF files about regional problems regardinghousing, public health, transportation, and education with no vision of a solution.

So here was my homework for the next 9 months and the project that would eventually drag me through many valleys of doubt and many sleepless weeks. Have a vision and design a specific solution addressing any of the issues raised in the 2020 Plan. The fruits of my design, if I were lucky, might be included in a show at the Art Institute for the fall of 2004 called “Chicago Architecture; Ten Visions” in which ten professional architects would each define an important issue for the future of the city and design a pavilion commenting on that theme. Doug Garofalo, an architect and participant in the 10 Visions show, had decided to have students put their work into his allotted space, positing that students would have a fresher, more creative vision. Here was where I was being allowed a toe-hold in the “the first major architecture exhibition in over ten years. ” What would grad school be with out the dangling carrot of a “wonderful opportunity? ”Too bad I had no background in architecture.

Have a vision? In researching an architectural and social design solution I felt less visionary than I as if I were looking through a set of dusty mirrors on present conditions hoping to find … the future. At best I could only hope to have a glimpse of a vision. I collected some funny looks when I described this assignment to other people. I knew what that funny look meant: “Since when is a crystal ball a design tool?”

It’s plenty difficult to predict the present and pick apart what factors really influence today let alone create a vision of the future. The present, the nasty now and now, is riddled with mysteries of corporate influence and closet dealings on all levels of government.

And lets not forget, time and technology march on. One moment a fresh, fast and shiny new advance makes optimistic promises of a better tomorrow. The next moment could find said promising advance being used to rain fire and brimstone upon innocent civilians. Even worse, it becomes so ubiquitous, so cheap, so Wall-mart that its impact is reduced to a clumsy thud. Its redundancy turns it into an only partially beneficial public nuisance. It could simply age badly. Worst of all, it could fail to be cool.

Even the Internet, the great information superhighway into the future and a better way of living, is aging. The bane of any web developer’s existence is the potential user who refuses to age with it and update their browser software. I’ve been a web developer since 1996. First, I saw the wave of companies clamoring for a web presence. I’ve since seen wave after wave of companies grudgingly rebuilding and face lifting their web sites to keep them current and up to content standards. When it’s time to write checks, CFO’s get quite grumpy at the great many toll booths on this information superhighway. Perhaps it’s more of an information turnpike.

Which brought me to how to have a vision in architecture? This is the brick and mortar world, where the tires kiss the concrete and where serious dollars have to be invested in plans, raw materials, real estate and construction. Even in liberal times such an outlay brings out the conservative vein. When found in this position investors resort to the tried and true. Designs spring from the past and there is very little room for challenge and experimentation. Too often, maybe, the chance to be of service to the greater public is seen as an occasional perk and not essential to having a professional design practice.

But what if architecture had nothing to do with building things? What if it was stripped of that pesky tendency to output an inhabitable object and was allowed to be messy, collaborative, speculative and disobedient? This, after all was the goal of the visionaries as they created the spatial visions for their pavilions in the show. Having a vision meant finding the values in the every day to build upon and daring to disobey the norm. Because it’s here, in the every day, where our pain is. Our pain is in lack of low income housing close to jobs, in neighborhoods bulldozed and decimated by the wealthy boots of developers and universities. Our pain is not cool. But our pain is vast. One need only take a sip from the ocean of tears to find problems upon which a creative, crazy, why-the-heck-not design dream could be introduced as a solution.

The project I came up with looked at the Digital Divide as it exists within current living/working conditions in Chicago. I lurked around low-income neighborhoods, train stations and convenience stores. I ran around photographing and observing spaces where I saw technology interwoven with public life. I spent the year designing modular computer terminals that could be put into public or semi private spaces to augment the informational landscape of Chicago. I created an information architecture that would live on each terminal and serve each neighborhood uniquely.

After the first 4 months of work, I had created a lot of crap. I learned one of the major job hazards of being a visionary was spending a lot of time hanging on to a creative voice and plunging ahead even though I couldn’t see shit. So, halfway through the process I held onto my core idea, gutted the project and started fresh. I had to let that darn vision yank capabilities out of me I didn’t believe were there.

And, in creating a vision, I had to let it go and call it done as a design vision even though it was not done as a design. I had envisioned a computer terminal with modular construction (and darn it, I made it look pretty cool); I had envisioned the information architecture of what would be on the computer screens within each terminal; I had envisioned it’s integration with the landscape of Chicago… but not 100%. I had to leave in gaps, holes where a real future for this idea could take hold. I had to leave places where the eventual choices of another designer or user would fester and bubble into a new reality; a new thing roughly referencing my vision. Maybe.

I was lucky enough to have my project ultimately be included in the Ten Visions show as part of Doug Garofalo’s pavilion. My vision was one he felt he could incorporate into his vision as something transformative and creative. I guess that makes me a sub-visionary? I sense that our goal was really to provoke ideas and give the non-architect public a glimpse into our desires for building a future before those desires are obstructed by dollars and nonsense.

We can only speculate, and even as we take time to speculate new possibilities arise and potentials shift. Time flies faster that we can take a swat at it. But our speculation can be full of art and optimism. Absent of wear and tear and gravitational drain, our visions are at least cool.

Chicago Architecture: Ten Visions exhibition is on view in Regenstein Hall, the Daniel F. and Ada L. Rice Building of the Art Institute of Chicago until April 3. Admission is free with museum admission. 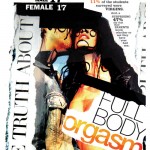