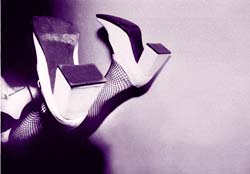 I giddily filled out a dating profile full of sarcastic humor and feminine charm. What type of man am I interested in? Age: close to mine. If they are too young, while they may look like grown men, they are, in fact, tall children; too old and it’s HELLLLOOOOOOOO DADDY! Body type: Muscular or fit, thank you. I like to roll over in the morning and be attracted to what I see lying there and not have to pause and remember his “personality.” Height: I have to be able to put on 4″ heels and still look up to see him. So there you go: Elmer Fudd, Peter Pan, Fred Flintstone, and Pip Squeak need not apply.

Then I went to the kitchen and made some tea. When I got back to my computer I already had two people trying to instant message me on the dating site’s chat feature. Here my troubles began. 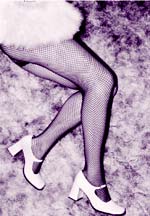 Within two weeks, I had already been on a handful of dates. They started out simple, just going for dinner or coffee and talking. I went to the zoo with one guy. Another guy took me for a long walk along the lake. By the end of a month I was going on at least four dates a week and the dates were growing more … intimate. Not as a rule, mind you, but the option was there if the mood hit me. And, the mood started hitting me more and more.

I’ve met a lot of interesting people from walks of life I would never normally encounter. I met a police officer in Wrigleyville with a Texas twang so thick we had to spell out our words to understand each other, but we managed to play a fun game of cops and rubbers. I met a quiet, reserved software engineer from Ottowa whose idea of “dinner” was McDonalds and who morphed into a complete wild man behind closed doors. I met a high school civics teacher on the South Side who liked to play detective and employed an ingenious way of figuring out my favorite flavor of ice cream. I met a “blood stain pattern analyst” who got really sick of my Discovery Channel-junkie questions. I met some very dumb men with a whole lot of money. It occurred to me if men that dumb can make that much money, I could do it too. In the meantime, I developed a talent for helping them spend their money.

My favorite dates live in different time zones. This meshes very well with the rigorous demands of an academic schedule. For example, I regularly see an airline pilot from Denver who “flies the friendly skies” into town once a month and a businessman from Columbus who visits family here every three weeks or so.

I’ve met men who’ve recently returned from Iraq. Well, they’re back physically, at least. When I talk with them, I find that their hearts have yet to come home from the war. I shut up and just listen.

I tried to keep it simple. I didn’t mess with web cams or camera phones (which are common requests in online dating sites). I refused offers to be flown places for a date. I turned down offers from men who wanted to be my slave (that’s just way too complicated). I refused offers from couples looking for a third because that would simply mean I am not the center of attention. Still, things spun out of control.

There have been days when I lunched with one gent and had dinner with another. I know the interiors of some of the most expensive hotels in Chicago. Some hotels have great bathrooms for getting yourself clean. Others are better for getting dirty. I know the best places to have sushi. I know good public spots for meeting up with someone for the first time and the best buildings to duck into if they turn out to be gross.

This was not the education I planned on getting when I came to Chicago. Countless times I’ve looked in the mirror and wondered why do I always want more? Am I powerless over this urge? Is my dating unmanageable? Is it time for some sort of 12-step program? Is there such a thing as Dater’s Anonymous?

I’m not good at this game (and it is a game; a lot more people you know play it than you think). I’ve put up with some very bad behavior at times. I’ve put up with verbal abuse and short tempers. I’ve had to single-handedly fend off the Spanish Inquisition. I’ve even been confused with butter (“Oh, sorry, you’re looking for something spread n’ready? Isle 3…not me!”).

I was force-fed some good life lessons along the way.

I learned that a ring on a man’s finger has no bearing on his state of mind. I once looked over a lunch table at a date and, upon noticing the condition of his ring finger, had to inquire whether he had some terminal disease causing his finger to turn yellow or whether it was time for me to go.

Skimping on the things that keep me sane for the sake of mine or someone else’s pleasure is a big mistake. I once dodged a birthday party to go play with a tall Canadian. He’s long gone, but I still get ribbed from my friend about having missed his birthday. When I look at the fruits of my months as a serial dater, I realize that my friends are the people that have stuck with me. I look down the names in my cell phone and amidst the friends and family there is only the occasional date in the list.

I had to accept that I was a serial dater: dropping in and out of men’s lives like a clumsy ninja and sometimes leaving wreckage in my wake. Somewhere along the line I started chasing more and more companionship. Somewhere I’d started allowing men to take up time I really needed for myself. Dating three or four different men at a time proved to be no escape from boredom or loneliness or whatever else I was feeling and didn’t feel like feeling. Like it or not, the more I kept running the more I ran smack-dab into me.

A girlfriend of mine laughed her sides sore when I told her my saga. She’s engaged now, living in a lovely lakeside home with her beloved, but for a couple of years she, too, was a serial dater. I watched from the sidelines of her epic romps with hundreds (I am so not kidding) of men. She went through the steps of demeaning herself and putting up with less, until she wouldn’t put up with it anymore.

Another friend of mine is getting a divorce and decided to try online dating about the same time I did. Having only known her as the conservative wifely type, I almost fell over when she regaled me with tales that could have come out of my life. Maybe the serial dater is just a normal phase of singles’ life in the 21st century? Could it be a new and not-yet-normal way women with perfectly good heads on their shoulders go in search of 21st Century companionship? Maybe in another 50 years psychologists will have identified this as a new phase of life; infant, child, adolescent, semi-adult, serialdater, semi-mature adult, crazy old bat with lots of cats, corpse.

I certainly wasted time bemoaning the fact that all the men I met seemed to be looking for one thing. So, recently I got tougher and changed the kind of attitude I brought online, and the type of people I met changed dramatically. When I took the actions that made me feel more valuable as a person, when I made my own choices and stuck to them, I became much better company to be around whether the situation got intimate or not. When I felt comfortable in my own skin I didn’t have to be the center of attention. Men who may be only looking for one thing don’t even make a blip on my radar anymore … well, unless they’re REALLY cute.

I actually made a New Year’s resolution, which I haven’t done since Mrs. Kelly made me write one in 4th grade. I’ve dubbed 2005 “the year of living selfishly,” the year when what elevates me (all of me) comes first. The only things I have a mind to chase right now are my own goals. Anyone else who wants a piece of my time can spend his juices chasing me. 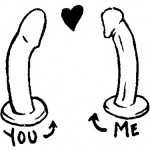