The hipsters live in Wicker Park–everybody says so. You see the signs of them, the boutiques selling zoot suits in the window and the coffee shops that people go to late at night when they have a bohemian urge. It’s not essential that you be a hipster if you want to purchase the attire. In fact, most hipsters probably don’t shop in Wicker Park, and plenty of the customers at Filter wear J.Crew outfits; they go there because the coffee’s good and they probably have a crush on one or another of the hipster employees. I’m pretty sure they’re legitimate, but I suspect that they don’t live in Wicker Park.

Nevertheless I have been skeptical of the hipster scene in Chicago. I’m sure they’re around. They’re everywhere, from Olympia, Washington to Kansas City to Pittsburgh to Philadelphia. Although in many respects Chicago boasts a superior status, I think that its hipster scene might pale in comparison; certainly with respect to Philadelphia.

Philadelphia is the pinnacle of hipster camaraderie. They move there from elsewhere in droves. It’s a cheaper alternative to Williamsburg and it is the perfect habitat for hipster activities. Life is cheap in Philadelphia, there are cheap Chinatown buses to Manhattan ($20 round trip) and the stakes are modest. A pint of PBR costs $1.50, and there are plenty of couches to sleep on.

Hipsters are difficult to define and easy to recognize. Typically they work in coffee shops, record stores and Whole Foods super markets. Many of them are bike messengers. They don’t typically walk around in groups larger than three, and unless provoked, tend to be relatively quiet in public. Their dress is elaborate, though the effort exerted is not proportional to the final effect; the desired aesthetic approximates the look of having just rolled out of bed, but don’t be fooled, it is a cultivated sort of preening. In Philadelphia they have tattoos and nicknames–Car Crash, Ruthless Toothless, The Plunk, Coucher, The Gee, Brown, Coat, and so on. They live in a limbo of kitsch and irony where nothing is sacred; and probably there is some secret hope of instant fame that they harbor in their respective hearts.

The hipster movement is making its way into the mainstream. Those instants of discovery have happened, and fashion designers pull hipsters off the street to dress them up in zoot suits. The mullet is coming dangerously close to crossing from an ironic element to a trendy one. Teeny boppers are donning ’80s attire, except their brown and orange parka vests are brand new. The checkered Vans are back.

Which points to the most interesting part about the condition of irony. It is not a sustainable state of mind. At a certain point an ironic love becomes an honest one, the familiarity of the joke conflates with the pleasure of the joke and the ironic impetus becomes secondary; it is merely the pretense. But regardless of how far one goes to make a mockery of this life, it is impossible to avoid the consequences of passing time. Eventually we hit thirty, eventually we hit forty, eventually we examine the possibility of marriage and children and other established institutions that become awkward if don’t take them seriously.

Many of them fall into the category of privileged white kids; most of them have college educations. Through the course of their daily life they are perhaps the first group of people who collectively chose to step down in the social ladder. They have rejected material values and in an effort to prove as much they take the conscious step down. That is interesting, but I’m not sure that the hippies would be proud of their offspring.

Why not Chicago? Why don’t the hipsters have nicknames here? Perhaps the mid-west values are not conducive to ironic gestures. Perhaps the stakes are too high here, the possibility of discovery a little more real than anything one might find in Philadelphia.

Manhattan is so much farther away; there is no shadow of the big apple. 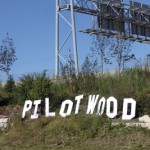 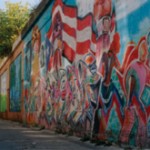 Building Roots: The Installation of a Chicago Artists Community