The way things are going, the chances that your choice for president will be in the White House are approximately fifty-fifty. With roughly half of eligible Americans voting, that leaves about 150,000 people to live in political discontent for the next four years, including the toddlers who wear XXXS t-shirts proudly showcasing the political commitment of their parents while scratching that nasty diaper rash.

The way things are going, the chances that your choice for president will be in the White House are approximately fifty-fifty. With roughly half of eligible Americans voting, that leaves about 150,000 people to live in political discontent for the next four years, including the toddlers who wear XXXS t-shirts proudly showcasing the political commitment of their parents while scratching that nasty diaper rash.

With two high-caliber Yale-educated presidential candidates in the running, it is highly unlikely that a radical will become the Commander in Chief. Oh wait. … Anyway, in case you can bear it no longer and finally decided to immigrate to another country, don’t go to Canada or Mexico, try somewhere new. F News has dispatched its foreign correspondents to the far-away corners of this world to get the scoop on today’s hottest destination for dissidents. And all we could come up with was: Turkmenistan.

In the same way that the former bohemian center of Chicago, Wicker Park, is becoming completely unaffordable to the artists who were initially the major draw for culturally challenged corporate youth renters, the countries that have long been among the favorites of American dissidents, like France, Morocco, and Mexico, are becoming way too expensive, unwelcoming, or in the case of Mexico, too-closely allied to the United States. Beggars can’t be choosers, so it is up to the money-starved younger generation of art world dissidents to take over a small country; fill its coffee shops and theme-restaurants with cutting-edge, yet affordable, art; establish a new highly marketable trend of clothing and attitude; and revive the country’s economy and culture in the process, before moving on to the next run-down region.

Although Turkmenistan possesses the world’s fifth largest reserves of natural gas, it has been unable to benefit fully from them due to a dispute with other Caspian Sea states over the legal status of the future oil wells. Not only is the country mostly cut off from the outside world due to egomaniacal policies of President-for-Life Saparmyrat Niyazov, it is considered the poorest among the former republics of the Soviet Union. That does not stop Niyazov from coming up with grand ideas on how to improve the quality of life of the Turkmen people. Following are some of the positive aspects that might persuade you to move there.

Performance- Recently an annual day of festivities was devoted to the muskmelon, a close relative of the watermelon. According to BBC, the local television station reported, “Since we became independent, our great leader, who has a great love of his nation and country, has brought the name of the tasty melons to the level of a national holiday.” The festival featured a series of art-related dance and music events to inspire people to celebrate the melon, considered a “miracle” in the Middle Ages.

Health Care- After suffering a heart attack in 1997, Niyazov ordered all his officials to quit smoking and instituted a national Health Day. In 2000, he ordered his whole cabinet to accompany him on a 36 kilometer walk. He was the only one to finish, with the help of his presidential helicopter.

Architecture-Turkmenistan has the largest mosque in Central Asia. It reportedly cost $100 million and was built in the desert village where President Niyazov was born, boasting four 295-foot minarets. Verses from Niyazov’s own spiritual guide, known as the Rukhnama, are engraved on the walls beside inscriptions from the Koran. Niyazov stated that that his words on the walls would become “guiding stars” for current and future generations of Turkmen citizens.

Literature- Students are required to read Niyazov’s 400-page blend of history, myth and philosophy meant to bolster a spirit of national consciousness among ethnic Turkmen. No government office or a bookstore is complete without the book. In some bookstores the book is the only thing they carry.

A word of caution, start saving now, a one way ticket to the capital of Turkmenistan, Ashgabat, costs around 3500 dollars. 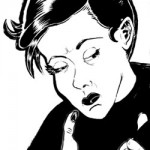 This F’ing Art School: Vindicate Your Mild Depression by... 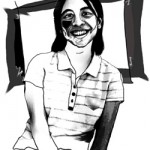 How A Spelling Bee Champion Got Me Back Into...