While not literally mimicking the Panopticon, the various gallery districts continue to operate on Foucault’s definition from an outsider’s point of view. The galleries exist as the open cells which do not interact with one another because of the paranoia that viewers entering into the spaces will view immoral activities-promiscuous sexual escapades, drug deals out of the back room, gossip, or worst of all technically or conceptually void art, resulting in punishment (a negative review, loss of a sale). 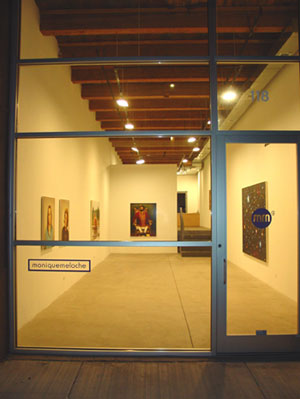 Describing the panoptical prison in “Discipline and Punish,” Michel Foucault describes a building of open vessels structured around a glass tower. “All that is needed,” he says, “is to place a supervisor in a central tower to shut up in each cell a madman, a patient, a condemned man, a worker, or a schoolboy.” Essentially, the structure would function as a tool to discipline the community using active surveillance of the individual by an anonymous “supervisor” in the great tower. The idea here that moral disciplining of the community would take effect as a result of each individual’s constant awareness of being observed at all times.

Applied to Chicago’s art scene, this theory is not so far-fetched. The Oxford English Dictionary defines the gallery space as a covered architectural structure that allows the passage of air, light, and ideas via open vessels on the sides. By this definition the person occupying the space, i.e. the art dealer in modern day society, functions at the utmost visibility to the outside world. Therefore, one may observe with ease all passages of knowledge, enlightenment, and physical movement.

While not literally mimicking this structure, the various gallery districts continue to operate on Foucault’s definition from an outsider’s point of view. The viewers act as the panopticon’s surveillance tower. The galleries exist as the open cells which do not interact with one another because of the paranoia that viewers entering into the spaces will view immoral activities-promiscuous sexual escapades, drug deals out of the back room, gossip, or worst of all technically or conceptually void art, resulting in punishment (a negative review, loss of a sale).

Monique Meloche’s gallery is successful not only for her risk-taking shows, but also as a result of the gallery’s high visibility (the press loves these kids) epitomizing this architectural structure in her former space at 951 West Fulton Market. While completely open sides were not feasible for survival in Chicago’s winters, the gallery stood in plain view from the exterior. Standing outside amidst the hustle of the meatpackers, viewers could survey a crisp clear image of the dealer typing away at the front desk. Two chairs sat in the front reception so that all interaction taking place between the dealer and clients, artists, etc., could be openly viewed. A piece of art, hung on one of the walls, enticed viewers as an announcement for the current show. The actual gallery space was sunken below street level. The stairway leading down into the depths of the gallery opened up to the reception area and out onto the street. Upon entering Meloche’s cell, the viewer immediately achieved a birds-eye-view of the information and atmosphere presented by the show as a result of the elevated reception level.

Her cell concealed nothing. A door did not section off the back storage room containing all the available works. Instead the storage room remained apparent and visible. Meloche also led viewers back to street level via a long narrow staircase in the back of the gallery. At the top of this staircase, parallel to the reception area, stood Meloche’s private office. However, one could view all back office activities taking place from reception. Nothing was enclosed by walls. Rather, they functioned as a display area, a tool to increase structure visibility as opposed to impede and blockade it. The space existed devoid of privacy.

By contrast, Hollis Taggart Galleries, located in the Gold Coast gallery district, does not exist as an open vessel onto street level. It functions in a more paranoid fashion, a paranoia as a result of structure. Foucault cites paranoia as one of many effectual disciplining tools within the panoptical society. A large blue awning announces the existence of the cell to a traveling surveillance team. Standing across the street amidst a series of turn-of-the-century town houses, warm lights and off-white walls glow out toward onlookers. Through a small intercom under the awning, they announce their presence, name not required, and are buzzed in regardless of identity. However, the gallery administrative assistant, perched at her antique desk along with the director in his back office are constantly aware of their display status. While not always attaining access to the information, they long to know who is watching them. Like Meloche, a great deal of importance rests on the response of the surveillance team to the gallery. The team encounters the space in a fashion mirroring Foucault’s description of the plague stricken town.

Foucault utilizes a description of a 17th century anonymous town, quarantined as a result of the plague, to seduce the reader into his theory of the panopticon. He writes, “It is a cemented, immobile, frozen space. Each individual is fixed in his place. And if he moves, he does so at the risk of his life, contagion, or punishment.” During the plague, inhabitants of the town were “arrested” into their own houses so as not to spread disease. Foucault describes the process of the mobile surveillance team, supposedly free of the plague, sentencing to death those who left their houses or communicated with the potentially ill.

On certain days, similar to those dictated by Chicago’s local arts postings such as Chicago Gallery News, New City, and the Chicago Reader, the team would arrive outside the individual houses for observance. The inhabitants were instructed to appear fully visible to those on the street through the front windows of the buildings. In this way, the surveillance team kept track of the status of the individuals and thus the overarching state of the community. The plague victims were occasionally permitted to leave their houses with the understanding that they would do so alone and remain on their designated street, their district.

Meloche recently increased visibility by migrating over to the panoptical hub that is Peoria Street and therefore altering the manner in which she and her artists were carefully woven into the art world structure. Inhabiting Julia Friedman’s former cell, Meloche has reconstructed the interior to fit surveillance standards. Increased light wattage, the restructuring and deletion of extraneous walls, and a crisp clean desk lowered to regulation viewing heights generates a more accessible view of the functioning within the interior.

The surveillance machine appeared in full form this past September 10 as evidenced by the circulating swarm of satiated wine-sippers expanding out onto the streets, both central and peripheral, of West Loop galleries. Standing in the front hallway of the 119 building which houses the steamy cells of 1R Gallery, Bodybuilder & Sportsman Gallery, ThreeWalls, Bucket Rider Gallery, Wendy Cooper Gallery, and Bridge Magazine, I peered out from an upper-level front window of 119 into the neighborhood. Through Meloche’s transparent glass front that opens onto Peoria Street, a painting of Haile Selassie stairs back at me from the facing wall. Viewers navigate through the space on full display as they enter the glowing front door. When opened, a vast loading dock in the rear exposes the gallery to the back alley creating an open tunnel completely visible from the outside.

In Foucault’s depiction of the panopticon, he notes how the light crosses through each cell as a result of the open sides. In this way, surveillance permeates all functions in the peripheral vessels. Last week, I migrated on over to Meloche’s new space to interview her for this month’s online edition of F News. I found myself greeted by an open front door allowing the passage of light, air, and a wafting scent of turmeric. At the top of the stairs sat Meloche and her assistant on full view for questioning.

For further details on this encounter please visit the online interview at www.fnewsmagazine.com. To participate in the “surveillance team” visit Monique Meloche at 118 N. Peoria St. www.moniquemeloche.com, and Hollis Taggart Galleries at 3 E. Huron, www.hollistaggart.com.