Kicking Back in Space: an Interview with Gallerist Monique Meloche

The architectural structure of Meloche’s gallery has consistently played an integral role in the shaping and establishing of its identity. In October 2000, following directorial positions at Rhona Hoffman Gallery and Vedanta Gallery (now known as Kavi Gupta Gallery), she announced that she would be launching her own gallery with the group show entitled Homewrecker.
For this exhibition, Meloche invited a massive group of artists to tackle her house with their work. Meanwhile, she transformed a vacant cold-storage locker into her
trademark cavernous gallery at 951 W. Fulton Market.

In May 2001, Meloche officially greeted viewers with the opening of Joel Ross’ I Borrowed My Mother’s Bedroom. At this premier for her sparkling commercial space, Meloche offered nothing for sale.

Curious about her current curatorial scheming in relation to the new space, I navigated my way through West Loop’s shadowy side streets one evening to take a peek and have a chat with Ms. Meloche.

Muphy Dunn: How do you think the exhibition space has shaped the gallery programming?

Monique Meloche: I did not set out to open this massive gallery where everyone was inclined to do large scaled installations and site-specific work. I love it all, I don’t regret a minute of it, but I think that once we got through 99% of our roster having shows [we saw] that everyone was getting this really specific read on the space in their mind. It was getting a bit out of control in terms of everyone wanting to make 10-foot paintings. Normally, the next step for galleries is not downsizing, but I don’t consider it downsizing. I just consider it a change. And I like that this is going to shake everybody up! [The artists] have got to think of the space in a different way.

MD: How do you feel the space on Fulton was indicative of you and your program?

MM: It was big and brash. It made a statement. It was not a meek space. It was a space you had to tackle! Some artists were intimidated by it and that was
fine. It pushed them. It was also a very memorable space. I could be in Paris and say “I’m Monique Meloche. I have a gallery in Chicago. I show this artist and this artist…” And if that didn’t do it then I could say, “I’ve got that gallery in the West Loop that’s sunken.” And then I’d get this “Oh yeah!” [laughs]. That was exceedingly helpful, but it also ended up being kind of a hindrance. You know, if all they remember is my space and they don’t remember the art in it… I like the fact that in [my new] space [on Peoria] – while still architecturally interesting and not just a cookie-cutter gallery – you can really focus on the art first, architecture second. [The old] space was really about the space.

Plus, I’m not going to get any more proposals to fill the gallery with water and make some sort of swimming pool installation. [laughs] During my first year we got a lot of people asking “Did you ever think of putting water in there?”

MD: What do you miss about the old space?

MM: I actually don’t miss anything now, which is very interesting because I was very sad leaving the old place. At the time, I was very discombobulated because I left without having a space. But, it couldn’t have been better timing. I didn’t really have a summer’s worth of blockbuster shows planned. [laugh] I knew what I was going to do in September and I had a lot of traveling to do. So, I physically left the city of Chicago and distanced myself…

The only thing that I miss is the little community. I miss the meatpackers. They looked out for us! That was very quaint about that neighborhood. And, crazy Bruno who owns the restaurant Follia next door saying ‘”You girls look hungry. Do you want some pizza?”

MD: You are a very publicly visible gallery especially in terms of press. How do you notice public perception changing?

MM: I think people know I’m here to stay. I’ve been around for a while, my artists are being asked to do solo shows with other galleries, museums, and institutions on an international level. If anything, we’ve become more reputable.

MD: Let’s talk grand openings in new spaces for moniquemeloche gallery. In both Homewrecker and I Borrowed My Mother’s Bedroom – the two major openings following a transition in physical structure for the gallery – the space also wove its way into the concept behind the show as well. Do you agree with that?

MM: Homewrecker definitely because it was my home and the only space that I had. Other than my personal closet, bathroom, and my office, everything was open. Everything! People were watching Tobias Bernstrup videos on my TV. I had a Joe Baldwin drawing installation. I had Marcel Dzama drawings on one wall. It really was about the space, but it was also about my lack of space. In June [2000] I had decided I was going to open a gallery and was kind of looking around. I really didn’t know what I was doing. I was enjoying my summer off and tending my garden very intensely with my little earpiece on so I could talk to my artists on the phone. Then in August I thought, “September is the opening of the season and people have short attention spans. I need to capitalize on everything I’ve done over the past 4 years. Chicago has a history of apartment shows. Why not be really crazy and invite all these people who I want to work with to show in my house?”

MD: How did the artists respond to your proposition?

MM: People were not crazy with installation. Frankly, they were a little timid because it was my home and because they thought it was a weekend sort of thing. I invited approximately 800 people. 350 people showed up. That’s unheard of according to percentages event planners will give you. It became definitely more than a weekend thing! But, at some point I – and my poor husband – needed our house back. Luckily we found the space [on Fulton]. I really thought long and hard about what I wanted my gallery to be and because I do have a really strong academic and curatorial background, that’s a really important part of a gallery to me.

But, I do want to sell because I do want to make money and keep running the gallery. I want my artists to make money from the gallery because they need to eat. But, it’s very important for me to take some leaps and I knew that there was a gap – a shortage of noncommercial artwork that wasn’t being shown. In the 10 to 15 years prior [to my space] and there were many more alternative spaces in the city things of that nature were happening on a very continual basis. There weren’t a lot of commercial galleries who were able to offer that kind of support [to noncommercial artwork]. I specifically wanted to open my gallery and make a statement with Joel Ross’ I Borrowed My Mother’s Bedroom. I wanted to say that I am a commercial gallery. Look at this really wonderful space and look that I have nothing for sale at my first show.

MD: How did you decide on Mike and Rob for this show?

MM: I had already committed Rob and Mike to my opening show for this season [prior to the move from Fulton]. It is a coveted spot. September has a certain cache to it in terms of being the opening for the season. I don’t think there’s any artist in my staple that wouldn’t want September. I also think that Mike and Rob are some pretty tough painters. Their work isn’t easily accessible. I also think it’s a really beautiful show, but it’s a really provocative show. I thought that was important to honor as an opening show. There are some nice saleable paintings in here but this is not easy. I think it conveys my sensibility.

MD: What was it like to come into a space that another gallery had inhabited and in turn see your former space transformed?

MM: I love the fact that the private dining facility that moved in [on Fulton Market], demolished my old space. It no longer exists. They put the second floor back in. I never have to walk by the old Monique Meloche. On the same note, I never want anyone to walk in here and say “Oh! I remember when Julia Friedman had this show…” I wanted to make enough changes to have it be my own.

It was very important to me to take ownership. The few wall changes I could make with made me feel immensely better. It was important to make [this space] me. The lighting has to be more what I’m about which is brighter. The walls have to be what I’m about which is a little cleaner. The reception desk is a little lower, a little warmer, a little friendlier. It’s a space for people to hang out and really chill. We’re working hard to get that Turmeric smell out of the space as well. As long as I can put my little stamp on it, it’s cool with me and I’ve gotten great feedback so far. So, we didn’t do too much, but it looks different! And, in a weird way, it’s a semi-reverse of my old space: where before you came in and went down, here you come in and go up! Before you encountered us first and art second. Here, it’s more simultaneous, but you don’t really get to us until you come to the back. It’s a nice place to be able to just kick back.

To kick back with Meloche visit Tuesday-Saturday 11-6pm. 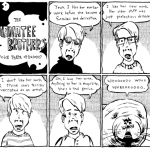 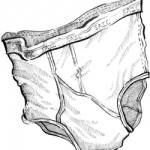