Fiona Tan’s current project Correction and Correctional Institutions, on view at the Museum of Contemporary Art, consists of six double-sided projection screens arranged in a circle around a group of benches. The portraits are shot from the knees up with approximately three hundred images looped in a montage, unconnected by any narrative.

Fiona Tan’s current project Correction and Correctional Institutions, on view at the Museum of Contemporary Art, consists of six double-sided projection screens arranged in a circle around a group of benches. The portraits are shot from the knees up with approximately three hundred images looped in a montage, unconnected by any narrative.

The subjects of the portraits do not say anything; only background muffles can be heard. Clothes, badges, security wrist bands, and an assortment of guard weaponry demarcate the kept from the keepers. Other than these signs of power and control or submission and passivity, the images are equivalent, and all difference is erased by the reduction of humans to two-dimensional flat screens. The idea is for the viewer of these images to accept the equality and recognize the humanity of the unknown, unseen people behind the walls, those shut, for whatever reason, from society.

We are asked simply to dwell on people in an institution. Tan is “not interested,” according to curator Julie Rodigues Widholm, “in making political proclamations or judgments with this work.” The layout of the exhibition recalls Jeremy Bentham’s Panopticon and the rhetoric of Michel Foucault’s “Discipline and Punish.” The Panopticon was the prototype for societal control and became a symbol for the inescapable fact that humans are bound and subjected to power.

Tan’s reliance on montage and video to equalize the images of humans simply shows humans as empty husks ready for their next institutional command. This prohibits a viewer from showing any empathy or concern for these inmates and guards.

Tan is trying to allow a viewer access to human beings who are usually forgotten once they are locked away, or humans that are often viewed as brutal parts of institutional discipline, i.e. the guards. If this is the case, why does Tan use an eclectic postmodern presentation that does not allow such sentimentality and love
of humanity?

A little narrative would go a long way. Tan could accomplish her objective if we were allowed to know these prisoners and guards, allowed to take a stand for or against them according to real evidence and stories. I do not think that Tan denies the necessity of prisons or of correction, but she does suggest that these institutions are constructed and are open to injustice. If this were not the case, then why would we need, according to Tan, to “confront our own prejudices and assumptions”?

Tan is being political but does not take a stand or offer solutions. For this reason, this exhibition is not provocative, and I tend to think that many people will just pass through it. Instead of entities bound by a system, couldn’t these flat, one dimensional “cinematic” images be humans with names and stories? I waited a long time in the gallery and eventually, one fellow, a prisoner, smiled and seemed to restrain his laughter. This was a human moment, the best moment of the entire display. Just knowing that this prisoner was tempted to laugh or acknowledge the absurdity of the project in which he was involved led me to see myself in him. This of course is heresy to a postmodernist, but if one wants to know power or oppose power, one has to at least acknowledge that power contains people of resistance or subjection, action or passivity. Only a system controlled by people, real subjects with real dignity, is subject to change. 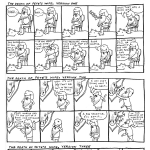 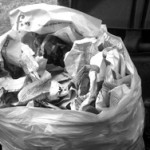