Burying Our Heads in the Radioactive Sand: The Yucca Mountain Crisis

Within the next few years this radioactive waste “disguised” as semi-trucks, freight trains and barges will begin to traverse the countryside using all of America’s important trade routes, including Interstates 90 and 94, and Lake Michigan, coming within 1/2 mile of at least fifty million Americans.

This December, the Department of Energy (DOE) is resubmitting the licensing application that will allow 77,000 tons of nuclear waste to be shipped from 133 locations around the United States to Yucca Mountain, Nevada. Within the next few years this radioactive waste “disguised” as semi-trucks, freight trains and barges will begin to traverse the countryside using all of America’s important trade routes, including Interstates 90 and 94, and Lake Michigan, coming within 1/2 mile of at least fifty million Americans.

“It’s going to take 28 years to ship all of the waste to Yucca Mountain,” says Peggy Maze Johnson of Citizen Alert, a Las Vegas-based activist group. “By then they are going to need a new place to put it, so who are they going to put it on next?”

No one wants the waste in their backyard. Some states, including Colorado, are lobbying the government not to allow the waste transportation routes to permeate their state lines because of the high possibility of an accident occurring over the many years of the relocation.

Transportation workers have expressed concerns over safety issues relating to the waste relocation, most of which will be conducted by rail. According to Johnson, “Employees of Burlington Northern have filed suit against the Burlington Northern Santa Fe Railroad because they have not disclosed all of the accidents involving hazardous wastes that have occurred on the routes and the employees feel they are being placed at risk.”

While some say transporting the waste is a necessary evil, the benefits of contaminating a new site are few. The common misconception is that rather than having the radioactive waste contaminating our own backyards it will be safely tucked away deep within Yucca Mountain. The reality is that the material will still be stored in all of the current 133 sites. According to the Environmental Protection Agency’s report, “Public Health and Environmental Radiation and Protection Standards for Yucca Mountain, Nevada,” an analysis of the environmental threats posed by the project, spent commercial nuclear fuel must cool for five years before solidifying and becoming suitable for storage within Yucca Mountain.

There is no end in sight for the creation of this dangerous waste, and no way of ensuring its safe storage. While most of Europe is looking to safer energy sources for the future, with Germany recently phasing out their nuclear program, the U.S. has increased reliance on nuclear energy. Nuclear power currently accounts for over 20 percent of our total energy expenditure, a number that is steadily rising in spite of our history of unsafe nuclear storage and disposal. Several of America’s long-term nuclear storage facilities have contaminated their surrounding environments, such as Illinois’ own Midwest Fuel Recovery Plant in Morris, just west of Chicago. It endured a spill that contaminated Morris’s environment and ground water. That facility holds only 745 tons of waste. Imagine the magnitude of a disaster at Yucca Mountain, where 77,000 tons of waste will be stored.

Yucca Mountain is just 90 miles Northwest of Las Vegas on the Western Shoshone Indian Nation’s reservation. The DOE has been considering it as the premiere repository of the nation’s most toxic waste since 1976, pouring money into the project without investigating any other possible sites for the burial.
After having their licensing application for the project rejected once by the Nuclear Regulatory Commission due to non-compliance with simple safety standards and overall design flaws, the DOE is planning on reapplying for licensure in December 2004.

While proponents of nuclear expansion dismiss any potential for another Chernobyl or Three Mile Island disaster, the EPA and the Office of Civilian Radioactive Waste Management are skeptical about several aspects of the Yucca Mountain project’s design. The casks meant to store the spent nuclear fuel are metal tubes in an alloy-22 casing, protected by a titanium shield or “drip guard.” The casks are required by the EPA to hold the lethal fuel without leaking for 10,000 years, although according to Citizen Alert, “Congress wanted the limit set at 300,000 years, the standard set by the National Academy of Science” because high level radioactive waste remains dangerous for 240,000 to one million years after its initial recovery.

The EPA knows that the canisters are unreliable. “It is reasonable to expect that individual container failures will occur over a long period of time,” says the EPA, going on to say that the canisters were expected to fail in “as little as 200 to as much as 1,800 years” in spite of the designated requirements. “One of the first things we’ve asked for is that the casks be tested to failure,” said Johnson of Citizen’s alert. But that is not on the agenda. When questioned on this, Allen Benson, an employee of the DOE, would not answer directly, but did say, “we estimate that the casks will last for longer than 200 years.”

The mountain’s geographic location is also an important consideration. It sits in a volcanic field and over two active fault lines that could endanger the casks. According to Benson, “The block of rock [Yucca Mountain] sits between two fault lines,” with the state of Nevada being “the third most active site for seismic activity in the U.S.” Kenny Guinn, the Governor of Nevada, testified to the House of Representatives in 1999 that since the DOE first began investigation of the site as a possible geological waste repository in 1976, “over 620 earthquakes with a magnitude greater than 2.5” have occurred in Nye County, where Yucca Mountain is located.

While the Secretary of Energy, Spencer Abraham, stated that “sound science” is behind the plan, this doesn’t match the concerns of scientists or even the Nuclear Regulatory Commission (NRC). The Advisory Committee of the NRC issued a report describing the decision to use the site as “relying on modeling assumptions that mask a realistic assessment of risk,” and stated that “computations and analysis are assumption-based, not evidence-supported.” The Nuclear Waste Technical Review Board estimated the project’s performance rate to be “weak to moderate.”

Scientists found that the casks had great potential to become corroded when exposed to an environment with a similar acidity as that within Yucca Mountain. The precious surface water that percolates through the mountain’s aquifers could, over time, cause the casks to deteriorate to the extent that the water table, area crops, and drinking water would become contaminated. If this happened, radiation exposure would not only affect Nevadans but people around the country who are exposed to animal or agricultural products from the region.

With the imminence of an accident at the poorly planned Yucca Mountain site, it is hard to comprehend how the DOE and Bush Administration could possibly justify the health risks and huge expense of the project. According to Nevada Governor, Kenny C. Guinn, the project’s “total cost for development, operation and closure will be $53.9 billion dollars. The Nuclear Waste Fund, at maximum, will generate only about half of the necessary funds,” leaving American consumers to pick up the tab.

It isn’t hard to imagine an energy crisis of California-like proportions resulting from the ill-advised Yucca Mountain Project, with corporations like Exelon, Lockheed Martin and Reliant at the wheel. Because the construction of new nuclear plants has already begun, the nuclear industry has been putting pressure on the DOE to speed the initial design testing along.

“The reason they rushed to Yucca Mountain without the research being done was because the deals [for new nuclear power plants] had already been done behind closed doors by the Vice President,” said Johnson. She continues, “The nuclear energy industry is suing the DOE for not having a place to put all their nuclear waste.”

In discussing the uncertainty surrounding the upcoming waste relocation, the problem of land ownership cannot be ignored. Historically, the U.S. government has treated Native Americans as expendable, so it should come as no great shock that the only area considered for this project, Yucca Mountain, is located on property belonging to the Western Shoshone Indian Nation. Yucca Mountain and the surrounding area have belonged to the Shoshone since it was deeded to them in the Ruby Valley Treaty of 1863. The Shoshone Tribe has lived near Yucca Mountain since prehistoric times and the mountain is an important part of their traditional religious beliefs. Julie Fishel of the Western Shoshone Defense Project says the Shoshone people believe that “water is sacred, air is sacred, land is sacred” and that they “were placed there to take care of the land for all life.”

Fishel also claims that the Ruby Valley Treaty was violated by President Bush when he worked in cooperation with a private interest group, the Western Shoshone Claims Steering Committee, which not only isn’t a federally recognized group, but has been declared as null and void by a resolution of the recognized government of the Western Shoshone. She says that “while tribal councils opposed money distribution,” Bush signed a deal with the private interest group to contaminate the Shoshone’s sacred land. When the Shoshone Indian Nation said that it was their collective decision not to sell Yucca Mountain to the federal government, Congress was unwilling to deal with the tribe.

“We’ve tried to reason with the government,” said Raymond Yowell, Tribal Chief of the Western Shoshone Indian Nation. “Yucca Mountain is in Western Shoshone territory and the U.S. has failed to show how it acquired the territory.” It doesn’t seem to matter whether or not they acquire the land legally, as long as they are able to start building. In the meantime, the Western Shoshone tribe isn’t receiving a penny for their property.

Since the initial bomb testing at the Nevada Test site on and near Shoshone territories, the Shoshone people have suffered from a slew of health defects related to radiation exposure. According to Chief Yowell, Shoshones have frequently struggled with “various forms of cancer. Diabetes is rampant among our people. Heart attack and liver and kidney failure is attributed to at some point being exposed to high level radiation.” Burying a high volume of radioactive waste in such uncertain conditions is undoubtedly a health risk, made worse by the fact that President Bush is seeking the renewal of legislation protecting nuclear companies from unlimited liability for accidents.

The problem of nuclear burial at Yucca Mountain will have consequences that affect all Americans and for many generations to come. Scientifically, the project is deeply flawed and the risks of long-term waste transportation are alive in each hazardous shipment. Rather than re-burying the problem of our dangerous radioactive waste, the U.S. could expend its money and efforts developing effective ways of containing existing nuclear waste without creating more. 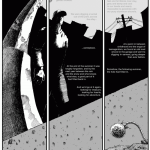