The negative reaction to Gigli last year was one of those rare times when our entire culture was in consensus about a film. Critics, viewers, and late-night talk show hosts converged to mock Gigli for its shameless flaunting of Jennifer Lopez and Ben Affleck’s real-life relationship. 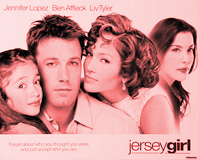 The negative reaction to Gigli last year was one of those rare times when our entire culture was in consensus about a film. Critics, viewers, and late-night talk show hosts converged to mock Gigli for its shameless flaunting of Jennifer Lopez and Ben Affleck’s real-life relationship. In some ways, the reaction was a little bit extreme–the movie had some serious problems, but it wasn’t quite as bad as everyone made it out to be. Nevertheless, the time was ripe for us to rage against the less-than-subtle culture of celebrity that invades our lives on a daily basis. The question in my mind walking into Jersey Girl was: Can Kevin Smith pull off a Bennifer movie in a post-Gigli America?

Jersey Girl has an almost painfully conventional plot. We start with Ollie Trinke (Ben Affleck), a successful P.R. representative for a Manhattan firm that deals with celebrities. When his wife Gertrude (Jennifer Lopez) dies in childbirth, Trinke becomes emotionally unstable and he loses his job. He moves in with his father (George Carlin), who lives in New Jersey, where he has to face the challenges of being a single parent and having a less than glamorous occupation. Smith is a director who is famous for not having a visual style, but this did not stop him from carving out a niche in the film world. It all started with Clerks, a $28,000 16 mm film about two convenience store workers. Smith wrote and directed Clerks when he was 24 and though the film was not strong technically, its unique combination of wit and intelligent vulgarity made it an immediate success. In Clerks, we are also introduced to the two characters who are to become Smith’s trademark: “Jay”, the hyper verbose ultra-crass stoner with a heart of gold and “Silent Bob”, the chubby side kick who rarely speaks and is played by Smith himself. Since Clerks, we’ve had four other Jay and Silent Bob films: Mallratz, Chasing Amy (his finest work to date), Dogma (his most controversial work to date), and Jay and Silent Bob Strike Back (his weakest work to date). In these films, which represent a decade of work, Kevin Smith dared to present a vision that was hilarious, insightful and intelligent, if at times a bit adolescent.

Jersey Girl is Kevin Smith’s first film that doesn’t rely on the Jay and Silent Bob characters. It represents an important career move . For although some critics have argued the case for more Jay and Silent Bob films and many fans may be disappointed, five films is quite enough, and it’s time to see Kevin Smith grow as a filmmaker. Jersey Girl is the first step in a new direction and despite its formulaic plot and a tendency to flirt with sentimentality, it is a sign of good things to come.

When watching Jersey Girl the first pleasant surprise is the quality of the performances. First-time actress Raquel Castro is adorable as Affleck’s daughter, Gertie, who decides that for her school performance, she wants to put on a scene from the Broadway musical Sweeny Todd.

Ben Affleck is in top form as the first slick, then humiliated Ollie Trinke, and Liv Tyler, who plays his love interest, delivers the performance of her career. Her character, Maya, is a Psychology Grad student who works at a local video store. She plays her part with forward charm and deep humanity and she is a pleasure to watch. This is not the first film in which Affleck and Tyler have played love interests. Remember Michael Bay’s Armageddon? To understand how profound the influence of a director can be, compare Affleck and Tyler’s performances in these two films! Rounding it off, we have George Carlin who gives a believable and skillfully understated performance as Affleck’s father.

There are times during Jersey Girl when I felt myself about to cringe, due to the use of slow ballads and other such film clichés. Nevertheless, the performances and sharp dialogue were so good that it was easy to forgive the film its commercial indulgences. Kevin Smith has become an icon of success and he is adored by many film students who wish to succeed, as he did, without sacrificing their artistic or intellectual integrity. Moreover, as he becomes more powerful in the film industry he seems to have the rare decency not to forget where he came from and who helped him along the way. With this combination of humility, talent, and chutzpah, Mr. Smith has beaten the odds and demonstrated that he is a force to be reckoned with. In his DVD release An Evening with Kevin Smith, we are treated to two hours of footage from a lecture tour that Smith took through American University campuses after completing Jay and Silent Bob. It is a riveting set of talks, and one of the aspects of Kevin Smith that emerges is the fact that he has a clear understanding of his own limitations and he is unabashed about admitting to them. On the other hand, it is clear that he also fully appreciates who he is and what he has accomplished. Jersey Girl is a promising prelude to a new era in his career. 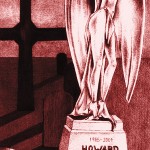