Moving Pictures: Pandora Lives in “Avatar: The Way of Water”

12 years after the first movie, “Avatar: The Water of Water” is showing audiences what actions movies dream of being. 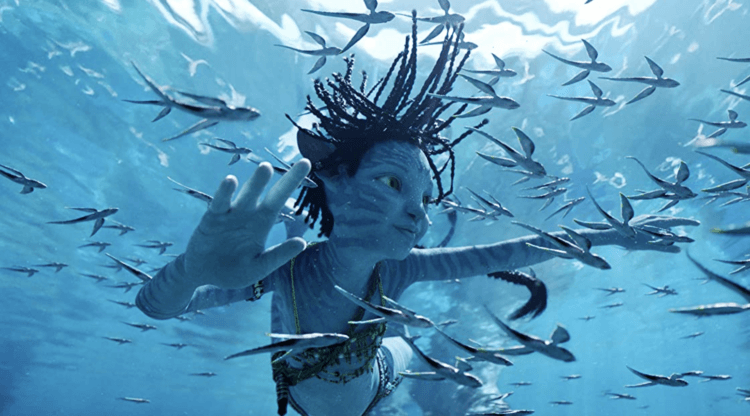 Post Avatar Depression Syndrome (PADS) describes the deep melancholy fans of James Cameron’s 2012 global mega-hit “Avatar” feel when they have to take off their 3D glasses, exit the cinema, leave Pandora, and return to Earth. Audience members are so thoroughly transported by the luscious alien world of Pandora that they become bereaved when confronted by the thick concrete of the cities they actually live in which are devoid of floating, wispy jellyfish, armored horses, and the great world tree, Eywa.

We can call PADS melodramatic, perhaps even goofy. But we cannot discount the profound effect “Avatar” had on the global box office 12 years ago. Its expansive world imprinted on people’s minds, even if the film’s plot has long since drifted away.

James Cameron is back to Pandora to see if he can ride that same wave twice, transport audiences back to Pandora, and inflict another round of psychic damage on Avatar fans, with “Avatar: The Way of Water.” This film takes place years after the first film, which is only slightly longer than it took for Cameron to make it.

Jake Sully, the protagonist of the first film, also known as Torak Makto, the marine who “went native” is no longer just a warrior chief; he’s now a family man with four four children. One of those children is an immaculate conception, borne from Sigourney Weaver’s Avatar from the prior movie. Kitty, said-child, is voiced by Sigourney Weaver, despite the character being decades younger. But this is Pandora and things like this happen on Pandora. The weird and the magical exist in nature, constantly contending with the grotesque machinery that man has wrought.

Along with those mechanical monstrosities comes a new wave of avatars: human marines reborn, hell-bent on revenge, led by the sneering Colonel Quaritch, played again by Stephen Lang. If you’re keeping count, we’re currently at five major characters, not even counting Neytiri, Jake’s wife, played by Zoe Saldana, or the human boy left behind on Pandora, Spider, who wants desperately to be a Na’vi himself, and also cannot possibly be read as an allegory for race, for your own safety. That’s an awful lot of characters, so it’s a good thing “Avatar: The Way of Water” is 3 hours and 20 minutes long.

To be clear, I’m not being sarcastic. It’s great that “Avatar: The Way of Water” is 3 hours and 20 minutes long. It could have been four hours long, with forty minutes being a pod of Pandora’s whales, the Tulkun, cruising along a Pandora horizon.

Cameron has said it took 12 years to make this movie because the tech needed that long to catch up to his vision. Cameron constantly submerged at ludicrous depth of the seafloor probably didn’t help speed things along. But both of those things paid off, as this film is both technically exceptional in its visuals and thoroughly imaginative in its world.

“Avatar: The Way of Water” is the scale of spectacle that action blockbusters of the last ten years have aspired to. Without slow motion or motion blur or dull palettes, Cameron brings Pandora to life with vivid, luscious colors, and vibrant settings. This is a beautiful movie, which is vital to its story.

We as an audience need to believe Pandora is worth fighting for, a difficult task considering we don’t even really believe in our own planet anymore. Pandora’s visual splendor is critical to our investment. That investment needs more than aesthetic beauty, it also needs Pandora to feel fully realized and lived in. Cameron accomplished this with the forestry of the first film and does an even better job in “The Way of Water.” The aquatic biome of this film is fascinating with Cameron infusing his love for deep water into this film’s creatures. Of particular note is the aforementioned Tulkun, the majestic, gargantuan sea creatures who are migrating across the seas of Pandora. Their design is fascinating and so are their characters, with one Tulkun having more personality than some of the humanoid characters. That’s not a diss on the bipeds, that’s just how engaging the whales are.

While there is all of this beauty in Pandora’s environment, Cameron is also invested in the ugliness of humanity. In the first film, Cameron set his sights on deforestation, making fires and explosions symbols of humanity’s excess, instead of just sprinkles on the top of its action set-pieces. In “The Way of Water,” whaling is Cameron’s thinly veiled metaphor for the unfettered greed of our species. And like with the first film, the eco-message is very direct. Cameron knows how to pack a punch. He knows how to keep on cranking, swinging, and accelerating, until audiences are literally clapping And I mean that literally. Clapping happened three times during my theatrical viewing.

It’s a thin message, yes, but compared to the other action fare out there, it’s as robust as they come. That’s part of the issue of reviewing “The Way of Water.” Much like Sully surveying the oceans for his future home, it is hard for me to treat the film fairly because of the environment that surrounds it. It is easily one of the best Western action-adventure movies of the last decade. But that may not be saying much.

It certainly has its flaws: its first twenty minutes race away from you, and its massive scale prevents the film from fleshing out all its characters and themes. In particular, Neytiri loses out the most, having a lot of screen time but very little to say. There’s undeniably issues with the film’s Americanism, with Sully’s kids speaking with American slang despite their Na’vi upbringing and some troubling comments from a 2010 interview with Cameron about the erasure of the Lakota people. The film doesn’t quite pick up on its themes of the self and self-discovery, never fully unpacking whether the Colonel’s avatar is responsible for his past sins; whether Kitty is her mother reborn; whether we as a global community can accept Spider having dreads.

It doesn’t hit those beats, and it’s still very long. But I can’t say I felt a second was wasted, or that there was a scene when I thought Cameron’s lost it, he’s aimless, he’s floundering. Every scene was steering towards some character’s arc or some major event, even if some of that may be clearly pointing towards the film’s three sequels. Yes, three sequels, with the fifth movie due in 2028. And if I’m being honest I hope “The Way of Water” manages to move someone, for some politician to discover his latent environmentalism, for an oil tycoon to consider alternative energy, for our species to right the planet away from disaster. Because even if the state of Earth is particularly apocalpytian, I’d very much like to visit Pandora again.

Getting Into The Holiday Spirit