The truly terrifying experiences in life and film are the awkward and embarrassing ones. 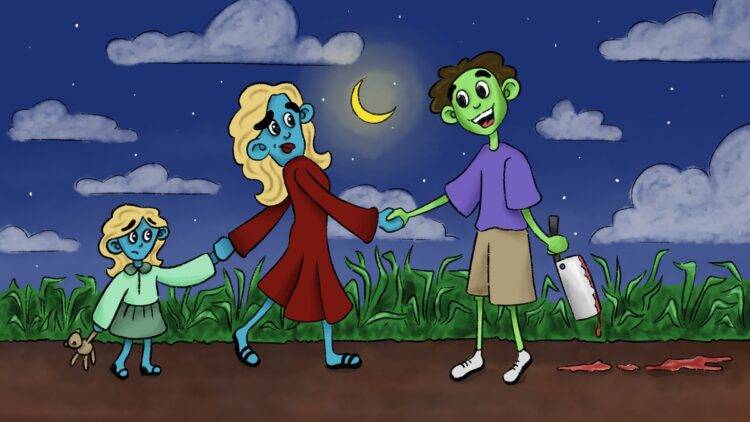 Browse the horror streaming service Shudder or comb the depths of Wikipedia, and you’ll find “horror” is really an umbrella term covering dozens of specific, well-studied subgenres. At its best, horror holds a mirror to society, and subgenres arise or adapt to reflect contemporary fears. So, while homicidal maniacs are hardly an invention of the 20th century, suburban slasher films emerged in the late 1970s/1980s to exploit Reagan-era worry that a rise in urban crime would soon affect “real Americans.” Likewise, the bloodsuckers of vampire fiction have at different times symbolized immigrants, colonizers, queer sexuality, HIV/AIDS, and a myriad of other concerns prevalent in radically different ideological camps.

But what scares us now? Fears of death and disease remain universal, but for the growing mass of anxious adults spending less and less time with friends, terror rises from increasingly pedestrian circumstances. As our public lives and interactions continue to “go virtual,” formerly routine social scenarios become voyages into the unknown. Given enough isolation and atomization, a simple exchange with a cashier resembles a Lovecraftian encounter with some eldritch god: paralyzing, as indescribable dread floods the failing mind.

That’s where awkward horror comes in. Founded on fraught social scenarios, the as-of-yet unnoticed subgenre I’m calling “awkward horror” typically involves characters in a strange environment, either meeting new people or getting to know someone better. The core danger is almost always human in these stories, but unlike a lot of slasher or home invasion movies, the unassuming villains of awkward horror aren’t an apparent threat when introduced. When those villains’ sadistic intentions are made clear, though, awkward horror affirms the worst fears of characters and audience members. In awkward horror, the discomfort or embarrassment common in these mostly innocuous exchanges balloons into agony and terrific acts of violence.

Though it’s a new designation, awkward horror overlaps with certain identified subgenres, and plenty of horror classics use awkwardness to their advantage. For example, “folk horror” necessarily involves folkloric elements, but the subgenre often succeeds when rational protagonists come up against humans’ unfounded belief in paganistic traditions. Director Robin Hardy’s classic folk horror film “The Wicker Man” (1973) takes this approach, as does Ari Aster’s “Midsommar” (2019). And when “Midsommar’s” protagonists Dani (Florence Pugh) and Christian (Jack Reynor) travel with Christian’s friends to rural Hälsingland, Sweden, the ever-awkward clash of cultures amplifies some equally awkward dynamics: Dani and Christian’s failing relationship, as well as petty competition among graduate students.  Propelled as much by pagan practices as by characters’ failures to communicate and cooperate, “Midsommar” illustrates the perils of disconnectedness through headstrong individuals who are no match for the unified Hårga cultists.

Although “Midsommar’s” fish-out-of-water framing resembles that of Jordan Peele’s debut film “Get Out” (2017), the latter horror hit is sometimes filed under “social horror.” A demeaning, catch-all term for movies “with something to say,” the concept of social horror implies the insufficient scariness of such films while also dismissing a trove of rich and layered stories as vapid torture porn. So, rather than exiling a Black filmmaker’s Black-led work to the Sunken Place of social horror, “Get Out” is best understood as operating at one extreme end of awkwardness. Awkward horror revels in the uneasiness that comes with some introductions or staying in a stranger’s home, and “Get Out” augments both with the differently privileged cultural divides that leave Black Americans feeling like foreigners in their own country. “Get Out” uniquely skewers the kinder, gentler racism of white liberals, but as a racially amplified work of awkward horror, its allegorical elements and grotesque turns stem from a situation that’s familiar for many viewers of color: meeting a white partner’s parents for the first time.

Yet where a lifetime of Blackness primes “Get Out’s” protagonist Chris (Daniel Kaluuya) to question the Armitage family’s intentions, inbuilt cautiousness doesn’t exist to aid the “heroes” of director Christian Talfdrup’s new movie “Speak No Evil” (2022). When the film’s Danish stars Bjørn (Morten Burian) and Louise (Sidsel Siem Koch) befriend a Dutch couple while vacationing in Tuscany, the latter pair is lively and a little eccentric, but there’s no guessing at the bottomless depravity of Patrick (Fedja van Huêt) and Karin (Karina Smulders).

It’s understandable that Bjørn and Louise take their daughter Agnes (Liva Forsberg) to spend a weekend with the couple and their son Abel (Marius Damslev) in rural Holland, but what unfolds is the purest example of awkward horror to date. There are no dungeons or “Saw”-like contraptions awaiting the Danes; instead, Patrick and Karin’s crude behaviors accumulate beyond several breaking points. Shortly after the Danes’ arrival, Patrick feigns ignorance of Louise’s vegetarianism, and he pressures his guest to eat boar. Later incidents of drunk driving, loud music, and aggressive parenting are unsettling, but any dissent from Bjørn or Louise is met with backhanded apologies that trigger debilitating guilt. Bjørn and Louise’s failure to forego niceness proves disastrous for their family, making “Speak No Evil’s” overarching message a nightmarish truth for those too anxious to make a scene: politeness is meaningless in the face of barbarism.

A sentiment that’s critical in every work of awkward horror, this underlying theme of “Speak No Evil” is also clear in “Get Out” and “Midsommar.” Far from affirming the Sartre-derived horror trope that “hell is other people,” though, these and other works of awkward horror only acknowledge the reality that some extraordinarily cruel people exist and can’t be swayed with niceness. In the cases of “Speak No Evil,” “Get Out,” and “Midsommar,” the antidote for wickedness is the same: togetherness, whether it’s through familial love, Black solidarity, or lasting friendship. A modern and refreshingly progressive horror subgenre, awkward horror recognizes isolation as a dangerous weakness and proposes human connection as our only defense against the powerful forces that mean to do us harm.