When the question is “America?” then there is no right answer. 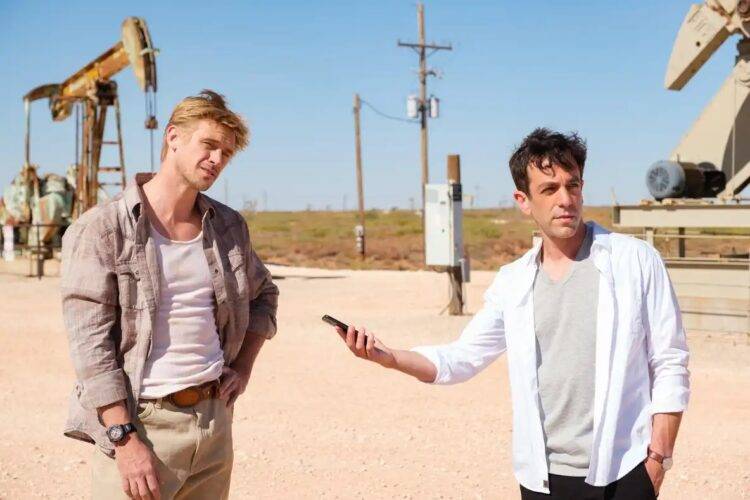 If you know one thing about the USA, then you know there is someone else in the country who vehemently disagrees with you on that one thing you supposedly know. Because it’s a post-truth, fake news, choose-your-own-adventure era. And reconciliation seems further than ever, no matter how many hot takes, video essays, or op-eds claim to have the answer.

With his directorial debut “Vengeance,” B.J. Novak wants to join this cavalcade of theories, and attempt to decipher the cracked code of the United States of America, giving us the answers, or at the very least, the questions needed for today.

These questions are filtered through the film’s protagonist, Ben. Ben, who among the many types of Americans, represents the worst, the most reprehensible, the vilest of its instincts: a liberal white man who thinks he deserves a podcast.

Ben, based in Brooklyn, is called to Texas to attend the funeral of a hook-up, who had told her family they were seriously dating. While there, Ben realizes this is the podcast story he’s been searching for. Up till now, he’s only had ideas, theories, abstract concepts on how to define America. But as Issa Rae, playing a podcast producer, reminds him, stories are about people. You can have all the great ideas you want, but they have to be filtered through people.

That ethos ebbs and wanes through the film’s story. At the onset, the Shaw family are outlines of Texas stereotypes. But as the film progresses, Novak finds deeper humanity in each Texan’s story. Ty Shaw, played by Boyd Holbrook, grieves his sister through fractured conspiracies. The record producer, played by Ashton Kutcher, isn’t making radio hits, he’s making sounds scratching on the universe. The supposedly murderous cartel drug dealer, played by Zach Villa, doesn’t ever want to kill, and brings his niece to Adele concerts. Each character starts as a caricature, but eventually, the film chips away at their surface, revealing something surprising, something human about them.

But every once in a while, one of the characters will become a mouthpiece for Novak, reciting a lyrical monologue that feels out of character. In those moments, the ideas supersede the people, and just as Issa Rae warns, the story suffers.

Novak has set up a difficult challenge for himself as the film’s writer. We, as audience members, are constantly being told by characters within the film what makes a compelling story. We are now consciously evaluating the film, by its own rules. And on top of that, the podcast Ben is making is meant to be good. We are now hyper aware, scrutinizing every line of dialogue for its supposed quality.

For the most part, Novak succeeds. Despite the construction being laid bare before us, there are many profound, moving lines in the film, delivered by Ben or other characters. One of the film’s most endearing scenes is the Shaw family trying to convince Ben of the innate value of Whataburger, something he, as an affluent New Yorker, cannot seem to grasp ahold of.

What undercuts some of the film’s potency is that it doesn’t trust us to find some of these sections good. Often, after Novak delivers a poetic monologue for the podcast, we are instructed how to feel about it by Issa Rae, emphatically declaring its obvious quality. The film needs to signpost very clearly what good writing is, to its own detriment.

In another scene, Ashton Kutcher waxes lyrical on the connections between the Big Bang and the principles of recording music. Rather than letting us sit with that, the monologue is interspersed with reaction shots of B.J. Novak, who like Issa Rae, is telling us how to feel. We are meant to be doubtful. Then suspicious. Then we should be won over. All of that could have happened organically, without Ben intruding on the frame.

And that comes to the film’s greatest weakness. B.J. Novak wrote a complicated and enjoyable script and I admire some of his directorial choices. He’s delightfully wry, endearing us to Ben despite his many flaws. But Novak lacks chops as a dramatic actor. He has a good, even-tempered voice for podcasting. But that same voice doesn’t carry with it the anger, the sadness, or betrayal needed from his character’s arc. There is one scene where Novak’s limits are obvious, when he argues with the much more effusive Boyd Holbrook. What is meant to be a turning point in the film’s dramatic action falls flat because Novak can’t give us anger.

Oddly enough though, Novak’s impenetrable features end up the strongest part of the film’s ending. I had my doubts throughout the film. I alternated between immersion and alienation, constantly being pushed and pulled by the film’s script and performances. The film wanted me to know it was clever, often either by actually being witty, and other times, by outright instructing me on how I should be receiving it.

But the film’s shocking ending suddenly takes a swift turn into ambiguity. We leave behind theory, concept, idea, and ground everything in Ben’s character and his final choice. Ben, a narcissist, who has told us everything about himself the whole film, now becomes completely unknowable to us. We leave behind the ethereal, and become anchored in the real. But what do we know about that reality? What can we say we know about Ben? What do we know about Ben’s America? What can ever be known about America?

The film doesn’t have the answers to these questions. And it’s all the better for it. Because no movie, podcast, op-ed, person, can hope to unpack the great American contradiction, despite the many that try. And though it can sometimes be a little smug or overbearing, “Vengeance” sets itself apart by ultimately reveling in uncertainty, rather than claiming to have the truth(s).

Moving Pictures: The Escape Room of ‘The Black Phone’