Thinking about the systems that we’re a part of. 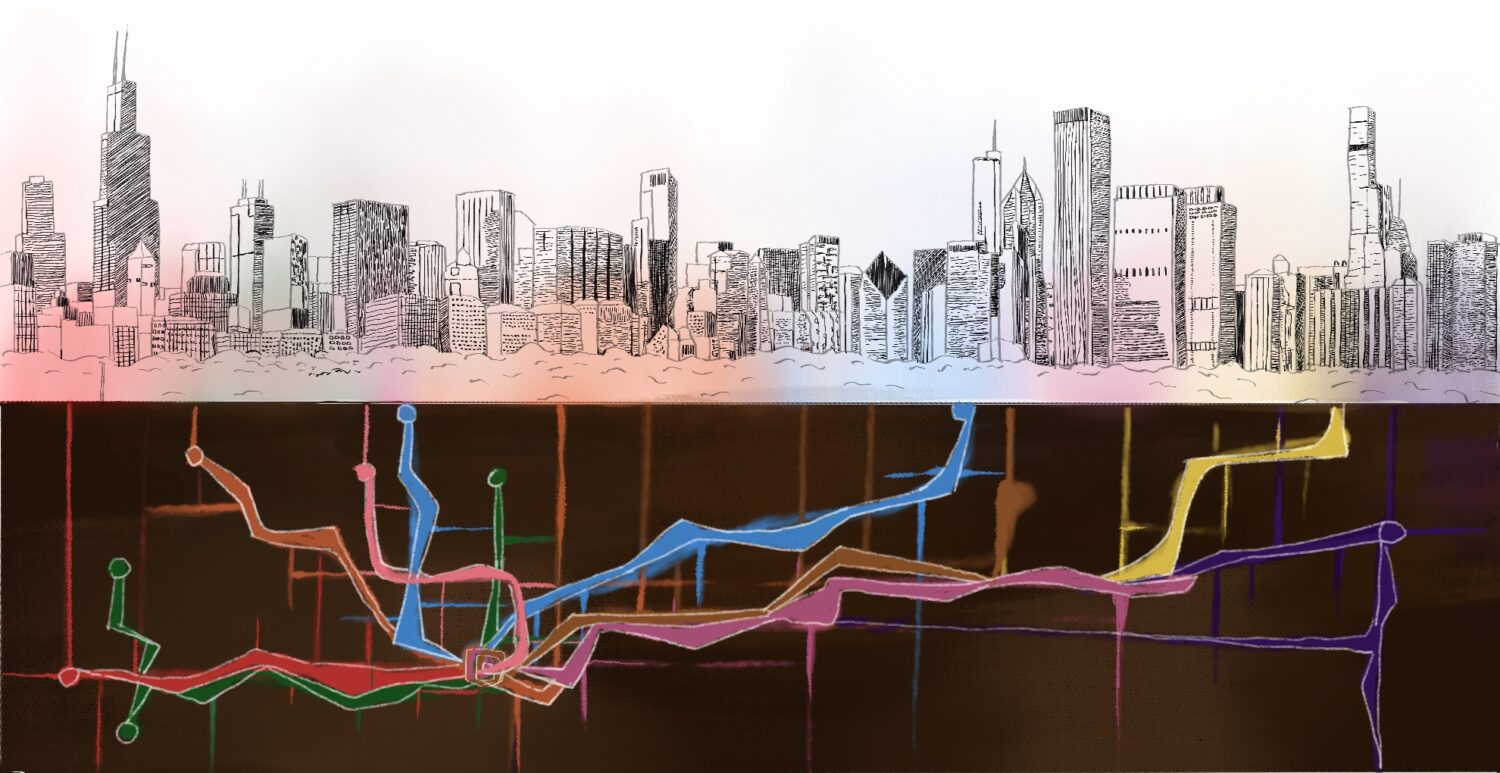 In 1960 “The Image of the City” by Kevin Lynch was released. This book, like many at the time, sought to reevaluate the ideas by which we had been constructing cities for the past century. Lynch’s specific contribution took note of the way people form mental maps. He posited that people build their image of a city around five things: districts (such as Cook County or The Loop), edges (such as the Chicago River or the Chicago city limits), landmarks (such as Cloud Gate or Wrigley Field), paths (such as Lake Shore Dr. or the Blue Line), and nodes (the epicenters of action in a city where people amass all on their way to do different things).

The concept and use of nodes has evolved in the last sixty years. A large part of this has come from network theory and the widespread use of computers, but its application reaches into nearly every scientific field. In the world of urban planning, node living has cemented itself as a primary concept over the past few decades. This is when everything we need from housing, jobs, entertainment, and access to food is centralized. Before, nodes would typically arise in neighborhoods forming from zoning prescriptions that allowed businesses to meet the needs of clients in a close vicinity. Today, however, we are seeing the rise of large-scale mixed-use developments. These are buildings and complexes that contain residential living, office space, retail fronts, entertainment spaces, dining options, grocery stores, open communal spaces such as parks or pavilions, and easy access to transportation.

These mixed-use developments have been proposed and advertised as a new, more environmentally friendly way of living. But it should be noted that the living accommodations at complexes of this sort are always luxury apartments, and often these nodes exist with a certain tax bracket in mind for their clientele. The environmental impact is not what people are paying for. Above all, people pay for convenience: a way of life where every want and necessity is within reach.

I spoke with Jill Riddell, an author who also helps write governmental policy, has multiple delightful podcasts, and teaches in the MFA writing program here at SAIC. Jill pointed out to me that the luxury housing of today is the affordable housing of tomorrow. I like this notion. The idea is dreamy.

I live in Block 37, one of these mixed-use nodes. It opened in June 2016 and in the six years since has already been outdone by buildings such as One Bennet Park, or Lincoln Yards which is currently being constructed. But it’s still hard for me to see a future where the Marquee Apartments, the residential portion of Block 37, is anything but a luxury apartment building. The location — the land, the physical space — of my apartment building holds a value that outweighs all the amenities it can provide.

Without needing a coat, even in Chicago’s harshest weather, I can get to Evanston and O’Hare Airport on the blue or red lines, not to mention the pedway system that runs through the basement of Block 37 to the millennium park train station. If I don’t leave the building, I can go rock climbing, go to a gym, a pool, a spa, a movie theater, an indoor golf course, a whole mall, and several restaurants. Securing a piece of land like this means that the owners control a central point of access for the Chicago residents. The foot traffic that passes through Block 37 alone is incredibly valuable to control. Morguard and CIM, the companies who own Block 37, have used the space to make money as all real estate speculators do.

With such a secure hold on a central location and a steady stream of renters, what could shift the rent of Marquee Apartments to become more affordable?  A drop in rent could happen; it has happened in the past (Block 37 was leveled during the 80’s in the name of urban renewal), but it would take a major shift in the city. A shift akin to the building of The New Hudson Yards in New York, where real estate mogul Stephen Ross quite literally attempted to shift the center of New York City to his new mixed-use node built over the MTA transit terminal in Hell’s Kitchen. A project of this magnitude is in fact under construction in Chicago: Lincoln Yards.

Lincoln Yards, which is being built by the real estate company Sterling Bay, aims to create a new downtown for Chicago. It is a colossal eighteen-acre mixed-use development with everything a resident could possibly need. It will take a massive number of resources to create. In doing so it will allow us to increase density, possibly shave off some fossil-fuel use, create new jobs, and attract commerce to Chicago, social and otherwise. But if Lincoln Yards is to become the affordable housing of tomorrow, will it mean that our capitalist society must create new, more luxurious and impressive mixed-use nodes to attract those wealthy few who live in Lincoln Yards today?

Jill and I discussed our views of the future. I think we could both agree that the current systems in place prey on our weaknesses, pleasures, and instincts to create a world where people make money off one another. In doing this we secure and accumulate resources like land, commodities, and wealth. To change our society from one where new development after new development must be created, it will take a massive shift in both culture and consciousness. It’ll mean a sharing of responsibility in order to maintain and dedicate ourselves to what we already have. It will require work from all of us to manifest a world where we share what we own to create a sustainable life where we can peacefully prosper together.

In the overwhelming communication of the internet, sharing information you think others should know is important; it can begin collective action, but the system can only be changed from the ground, on a local scale. This is not simply about land use but about the overarching structures in which we exist and land use is merely exploited. We need to fund organizations doing work we want to continue, go to our local beat meetings where we can push against the police state one block at a time, and to fight gentrification and the toxicity of the urban renewal cycle we need to get to know our local alderman and make our way to city hall where our voice can be one in 65 instead of one in 6500.

If this sounds unsexy, that’s because it is, but these actions are how real change occurs. “If every city dealt with their own contribution to our climate problem,” Jill said, “there would be no need for federal policy.” Think about the massive change that would occur if responsibility for local and global issues was not just shared but worked by every individual. Jill told me the Riddell family has a saying, “get up, dress up, show up.” It’s only through this mentality that the future of land use and resources can be anything but grim.

Most of us at this school have an incredible capacity to create things. This is a skill that many people will pay for. But the systems we become a part of are the impact we make, and regardless of our intentions, the effect is what lasts and matters. As creators, our responsibility is to find out where the materials we purchase come from, how they are extracted, how they are disposed of, and how the workers are treated. We need to create with reuse in mind and make choices in our creative process that will have lasting effects we want to see. We cannot simply think we fixed a problem by attaching a solution, if the system that created that problem remains unaltered. We must solve problems by taking into account as many variables as possible; nothing we do exists in a vacuum, and we can no longer afford to look at problems in their simplest form, only accounting for the factors directly affected by our choices. The indirectly affected consists of everything, and only through accounting for these larger systems of cause and effect can our solutions be helpful to all of us. This work is no small task, but if done thoughtfully by all of us, it can change the way everything works, bringing about better systems.

I want to ask you to try something. When you form your mental map of the city, when you examine our built environment, evaluate it on the same basis we should be evaluating our own work by. When you go to get dinner somewhere in Lincoln Yards, or your local node, think about what these spaces are telling you, but also think about what it took to get here, what they are hiding, what is not considered, and contemplate critically your place in their impact on the world. If we can all do this and actually show up where we can have an impact, we have a chance of using our land to help everyone, not just those who own it.