Go Back, Go Into 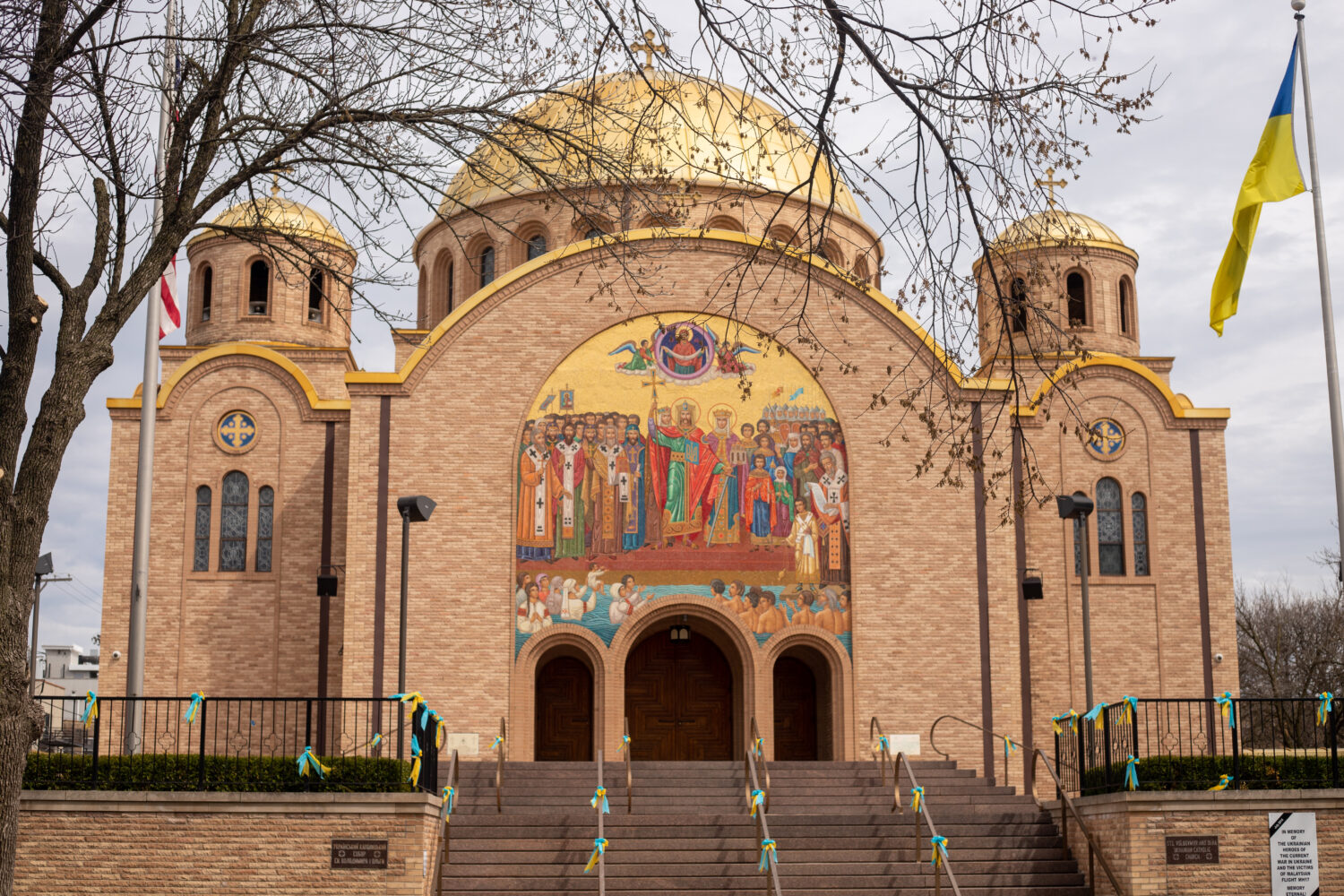 Saints Volodymyr & Olha Ukrainian Catholic Church. A mosaic depicting the Christianization of Ukraine over the doors. Photo by Aidan Bryant.

On March 18, former presidents Bill Clinton and George W. Bush visited Saints Volodymyr and Olha Catholic Church in Ukrainian Village, leaving flowers outside the church in solidarity with Ukraine. A video posted to Bush’s instagram outlines the significance of Chicago’s Ukrainian history and its status as a sister city to Kiev. This was not a major news story and only garnered around 128,000 likes on Bush’s page, a page with 1.5 million followers. The comments section is full of people praising the former president’s display of unity in such a divided time. One commenter writes: “Civil people with political differences, a rarity.” 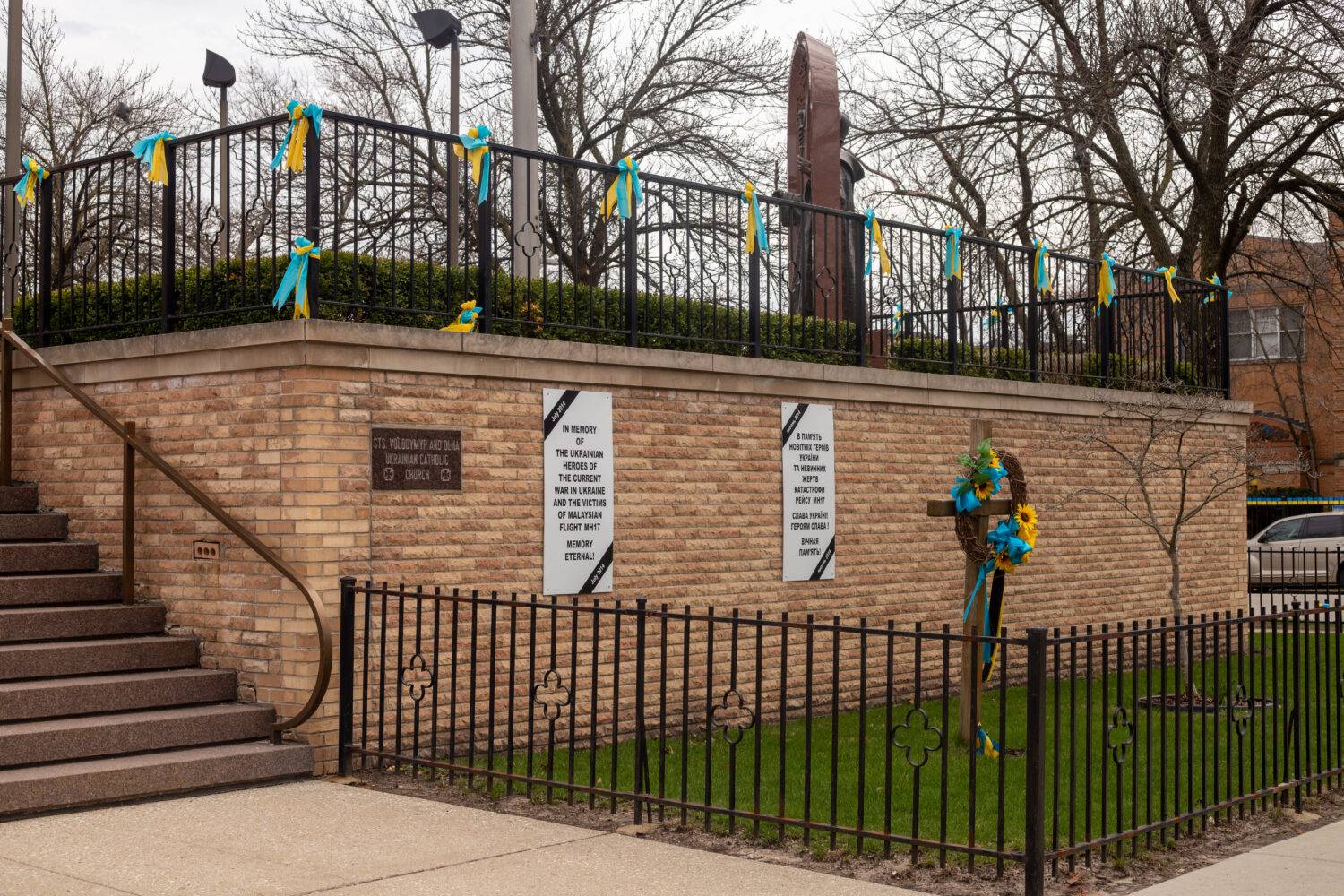 A cross and a plaque dedicated to those fighting in the 2014 war in Ukraine and those who died in Flight MH17, a passenger plane shot down during the war. Photo by Aidan Bryant.

The description of George Bush and Bill Clinton as “civil” is the common understanding of both men in 2022. They are seen now as keynote speakers and talk show guests. Bill is “Hillary’s Husband.” Bush is the guy who gave candy to Michelle Obama and paints funny pictures in his spare time. Harmless old men, relics of a time gone by in American history. Men who served and represented their country. Even Bush, a deeply unpopular president among liberals during his term, has swung full circle for liberals into being embraced as a passionate conservative. And Clinton, in the era of #MeToo, has managed to dodge bullets, even with a television show being made about the Clinton/Lewinsky scandal. Why is this? 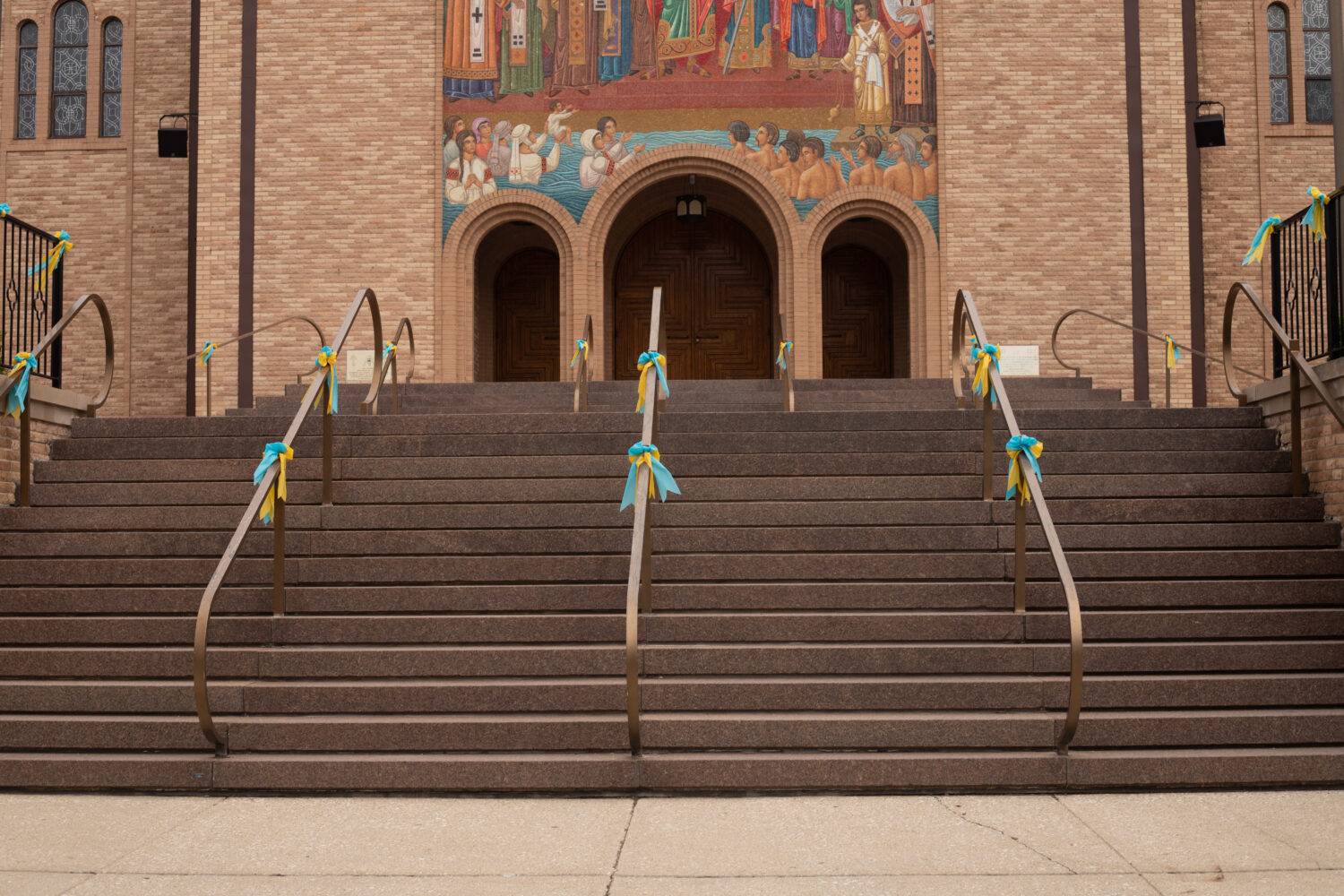 Blue and yellow ribbons in support of Ukraine adorn the steps of the church. Photo by Aidan Bryant.

The simple answer is that, in the wake of Donald Trump, the idea of a decent person leading America is desirable. Bush and Clinton maintain the veneer of respectability. This reorientation of both is surprising since Bush was portrayed as a bumbling fool for most of his presidency, and Clinton has numerous allegations of sexual assault against him. This idea of respectability is an aesthetic one. Their actions are abhorrent, but they talk nice. Sure, Bill Clinton put into law one of the most draconian bills ever with the Clinton Crime Bill, and George Bush launched America into two brutal wars that should have never been started in the first place. But they never embarrassed America in the way Trump did. They hid behind the mask like everyone else who took office did. 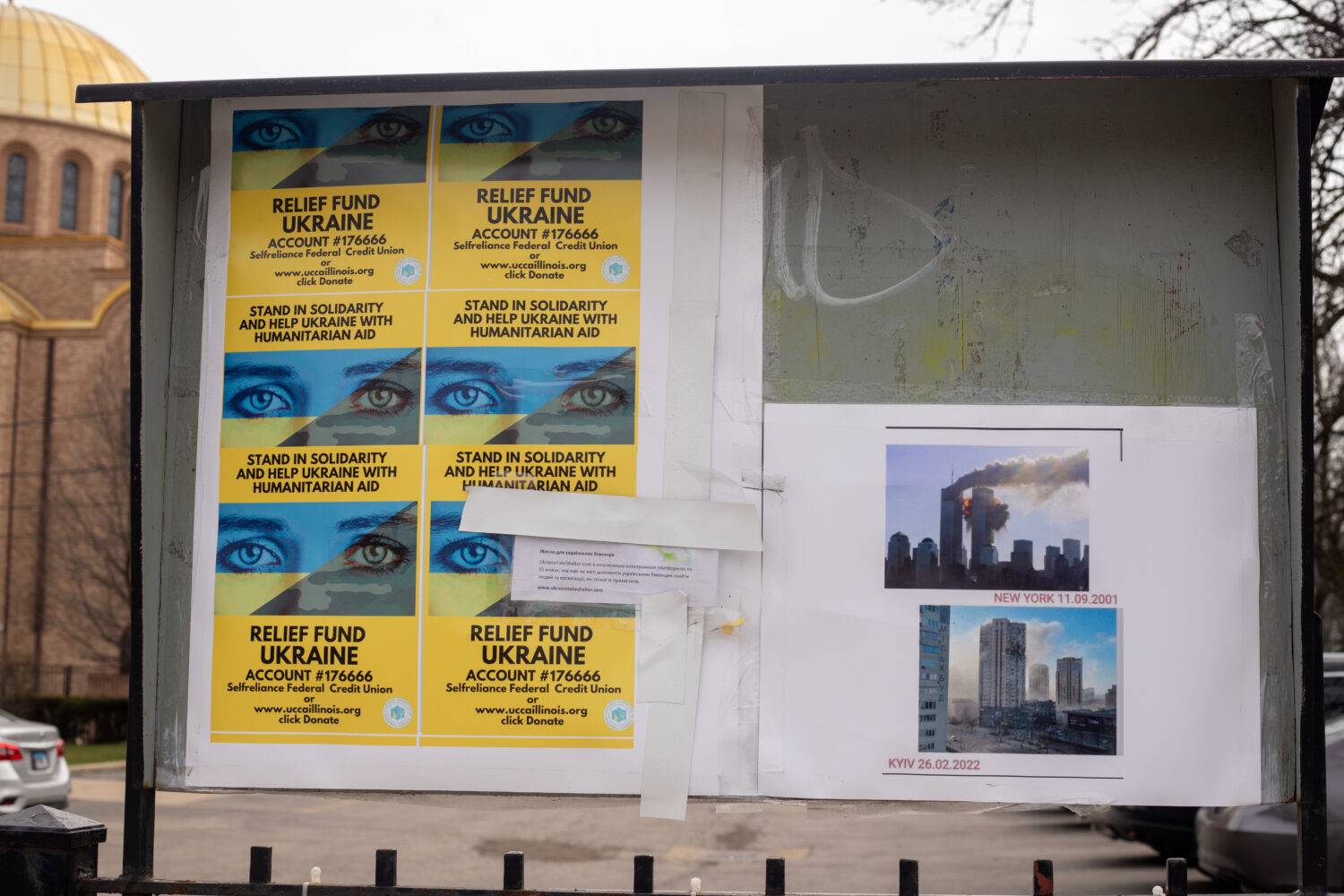 With the recent invasion of Ukraine, one of Bush’s greatest hits popped back into relevance. There are comparisons to be made between the U.S. invasion of Iraq and the Russian invasion of Ukraine. Both unjustified, both for reasons beyond what was stated, both committed by major countries, both bombing major cities, both deeply unpopular. But there has been an interesting trend. Iraq, compared to Ukraine, is being relegated to ancient history. Whatever is happening in Ukraine right now is making Iraq look like child’s play to most people. Putin is now being propped up as the great villain of the 21st century. This is the greatest war crime of the millenium. We must do something about this. America would never let something like this happen, this is not in our nature.

This is exactly our nature. The relegation of Iraq to the dustbin of history is out of convenience and ignorance. What we did in Iraq is beyond unforgivable. We starved people to death. We used depleted uranium rounds and other weaponry that has contributed to major spikes in cancer and birth defects in cities like Fallujah. Countless acts of state sanctioned torture were committed at Abu Ghraib and other prisons. All of this done for nothing more than oil money and defense contracts. 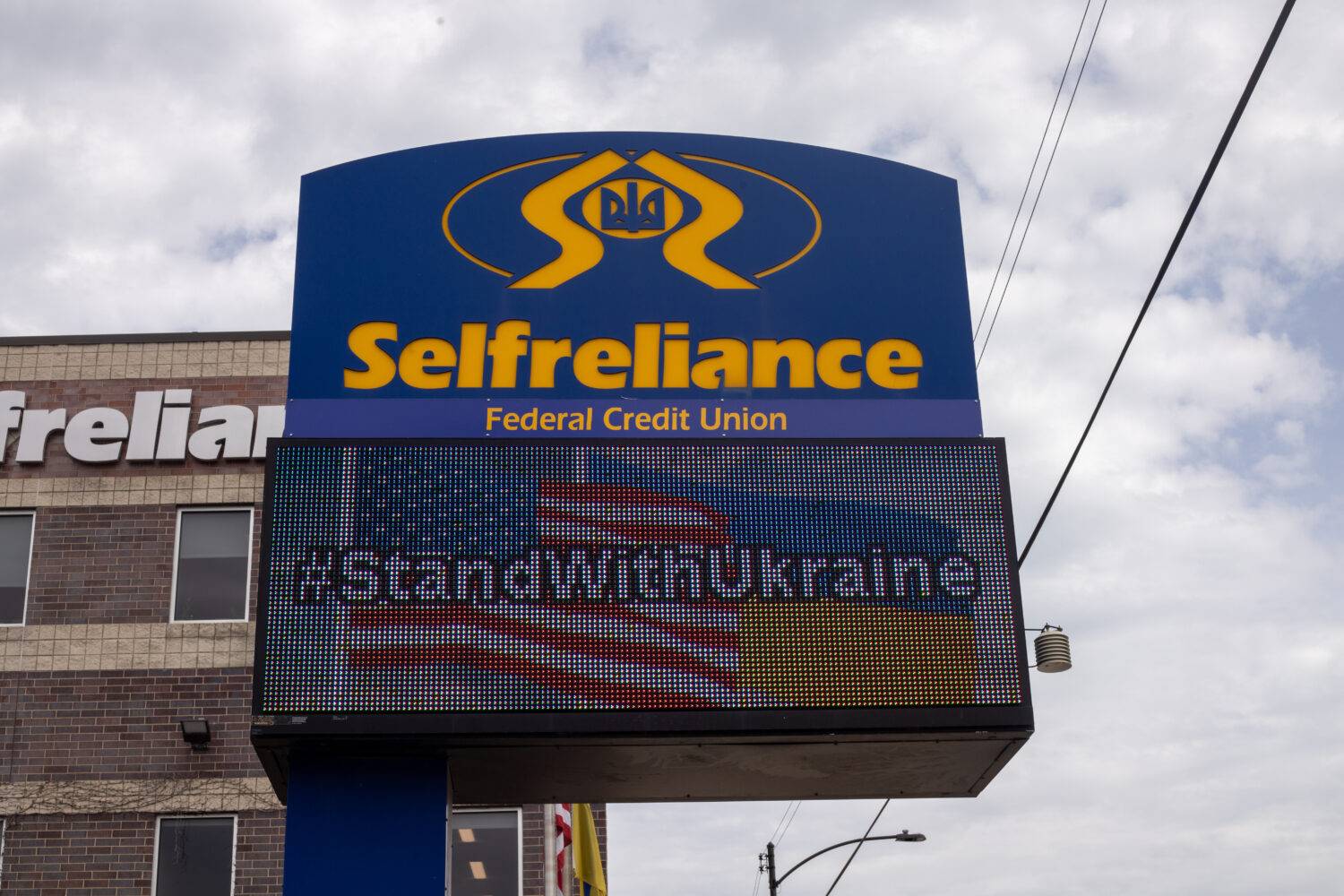 This current era of American history is a land of contrasts. In the face of absolute humiliation in the withdrawal from Afghanistan, we are now met with calls to remobilize. Go back into Afghanistan. Go into Ukraine. The same people who criticize the United States for being a country built on imperialism are now calling for more intervention. I’m not saying what is happening is right. It is abhorrent. But acting like we’re any better is disgusting. George Bush calling for peace in Ukraine is frankly sickening. What is going on in Ukraine is no different than what the United States has been doing around the world for centuries. People just don’t want to confront that.