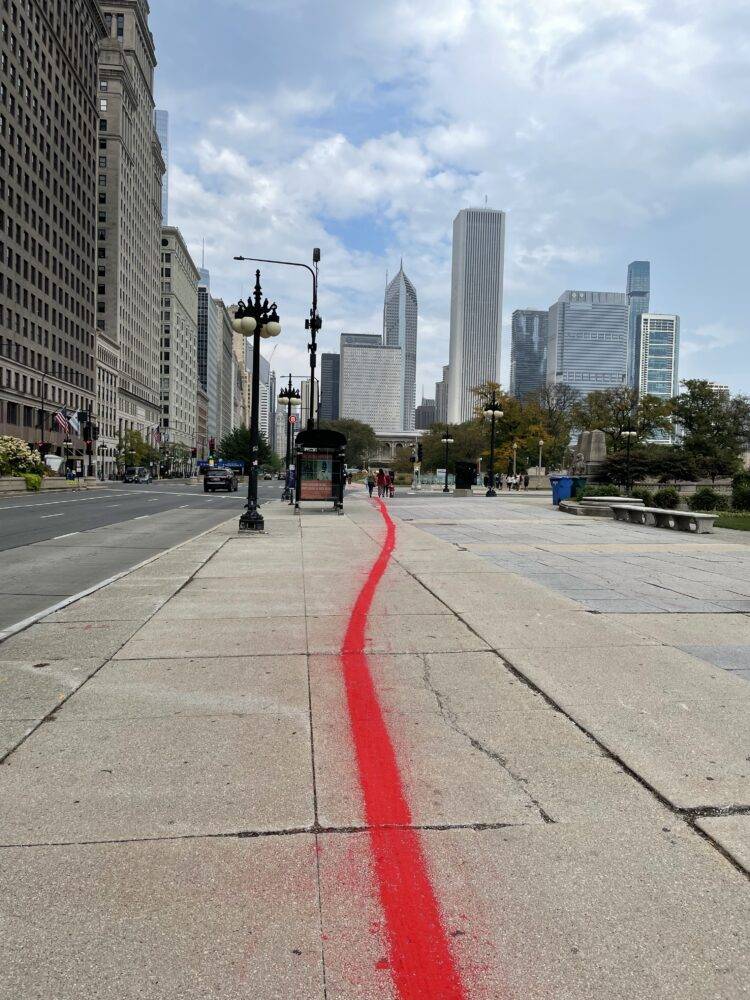 “Whose Lakefront?” by JeeYeun Lee, as installed along Michigan Ave. Photo: JeeYeun Lee

The city of Chicago, like all cities in America, tells a certain story about itself. Chicago’s story involves brave settlers, dauntless entrepreneurs, and determined engineers. It’s a story of industry and innovation, that carefully guides its listener from Jean Baptiste du Sable to Michael Jordan.

Complicating the narrative is a complicated process, so JeeYeun Lee kept it blunt: She drew a line. The line stretched along Michigan Avenue from Roosevelt Street to the Riverwalk. The piece — titled “Whose Lakefront?” — took two years of development, an eleven-person planning committee, forty volunteers, and 2,000 lbs. of red sand. Lee distributed the sand along the sidewalk by wheelbarrow to create the line during a 3-hour procession on October 2, 2021. The piece’s premise was simple: The land to the west of the line is the city of Chicago. The land to the east is unceded Native territory. Its simplicity would approach comedy, if not for the gravity of its subject. It’s playground politics: This side is mine, this side is yours.

In the late 18th century, Chicago was still called Eschiigwa or Chicagou, which, according to John Low, a professor at Ohio State and citizen of the Pokagon Band of Potawatomi Indians, means the “place of wild onions” or “skunk,” respectively. That name would change in the coming decades. By the mid-1800s the majority of the Potawatomi nation, along with the other regional tribes, were forced by the federal government into signing land-cession treaties and dispersed through the Midwest. Eschiigwa became Chicago.

At the same time as this coercion, George Bancroft, an American historian, was writing the 10-volume “History of the United States, From the Discovery of the American Continent.” This “History” posited America as a largely philosophical act. As Jake Silverstein recently wrote in the New York Times Magazine, according to Bancroft the act was “undertaken to model self-government for all the world.”

As part of this great government experiment, our philosophically-inclined forefathers sent surveyors to portion out the continent. In the Chicago area, the Lake proved a difficult feature to survey, according to Low. As a result, surveyors drew their borders along the shoreline, which, at the time, ran roughly along present-day Michigan Avenue.

A few years ago, Lee read about a 1914 lawsuit that the Pokagon Potawatomi tribe filed against the City of Chicago. The case rested on the superficial shoreline, a swath of the city that was created after the Chicago Fire of 1871 when the city had an exorbitant amount of burnt rubble to dispose of. The rubble became fill along the lakefront, and the city stretched into what was then shallow lake waters.  The Pokagon Band of Potawatomi Indians argued because the land-cession treaty only ceded territory to the shoreline, all of the land fill that had been built since is, in fact, Potawatomi land. Today, this landfill includes some of the most valuable property in Chicago, including Grant Park, the Art Institute of Chicago, and all of Streeterville. The case made it to the Supreme Court, where it ultimately failed. The Court ruled that the tribe ceded their rights to the land when they abandoned it.

“That is really nuts,” Lee says of the ruling. “First of all, by the terms of the treaty, all of the native people had been forced to move from Chicago to West of the Mississippi River,” she says. “And second, it wasn’t land. It was lake. By what means was anybody supposed to occupy?”

Lee is the daughter of a Korean diplomat, and she spent the first part of her life moving frequently. From a young age she was highly attuned to the way that different places feel, and understood deeply the process of reacquainting oneself in new lands. As a graduate student at Cranbrook Academy of Art in Detroit, Lee walked five roads in 25-mile increments from the center of Detroit out into its changing landscape. Walking became her method for investigating the ways Detroit had developed physically in response to forces of racism, exclusion, and containment. Walking was a way to dig into her city’s archives by circumventing its story.

Lee is still working, and walking, along the Lakefront. She hopes to soon release an audio tour about the territory which will weave readings from the treaties and lawsuits into statements in Potawatomi. As Kerry Cardoza wrote in a short review of “Whose Lakefront?” for Newcity: “Education on this history is an important first step in decolonization.” “Whose Lakefront?” is a bold reminder that sometimes education has to happen without books.

Parker Yamasaki is the managing editor at F Newsmagazine. She is constantly looking for a sunnier place to sit.

Thinking Outside the White Cube: Alternative Art Spaces in...

Once More With Feeling